NBP signs MoU with PHA of KPK to enable 200,000 low-paid employees to build their homes 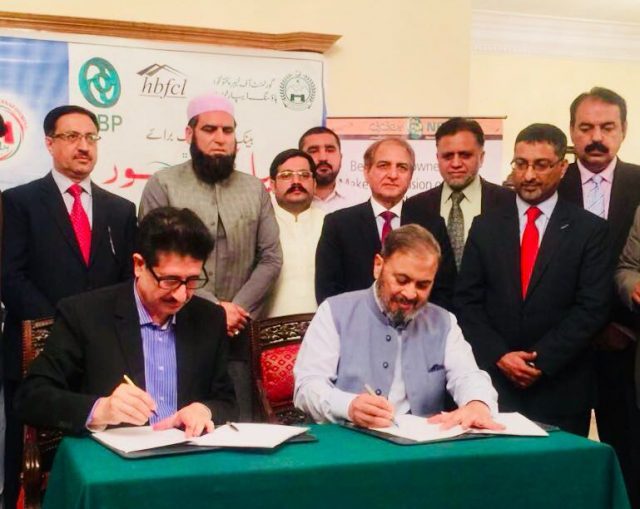 A Memorandum of Understanding was signed between the National Bank of Pakistan and the Provincial Housing Authority of the Khyber Pakhtunkhwa at a ceremony held at KPK House Islamabad on Thursday, 12 April 2018. According to MoU, the NBP would provide financing for the construction of about 200,000 houses by the Provincial Housing Authority (PHA) KPK for the low-income provincial government employees at affordable cost and easy installments.

The advisor expressed the government’s commitment to the social housing sector and appreciated efforts of the DG Mr. Usmani and NBP team who worked hard to conclude the deal.

The President NBP while speaking on the occasion said “There is an estimated shortage of about 10 million housing units in the country. It is heartening to see that the Housing Ministry of KPK has come up with the scheme of social housing for the provincial government employees and others. This will fulfill dreams of many low-income employees who might not have ever thought to have a roof over their heads. My personal support would always be there whenever I am required to play my role.

This MOU is just the beginning of NBP’s pledge to promote and make social housing related projects a success in KPK and across the country. It is a good opportunity for the low-paid individuals of government of KPK to fulfill their dreams of constructing their own homes at a price that is affordable. We are also working closely with private sector and companies such as Ansar who have actively contributed in promoting social housing in Pakistan. We realize its impact in overall growth of the economy and we assure, as a national institution, to play its part to provide shelter to less-privileged”

Mr. Usmani asked President of National Bank of Pakistan to include Islamic Modes of Financing for those who do not wish to avail the Housing Finance facility from Conventional Banks. Mr. Saeed Ahmad expressed his pleasure to know this and said that, “I am pleased to learn from DG Usmani that PHA would like Diminishing Musharka facility as Islamic Mode of financing to be made available to employees considering their faith based preference. As a matter of fact, the purpose of my coming to work in Pakistan was, indeed, to promote Islamic Banking”.

Addressing the participants, the Special Advisor to Chief Minister for Housing Dr. Amjad Ali expressed his appreciation on launching of this project in which the low-income KPK government employees, approximately 200,000, would get benefit in construction of their homes at very affordable installments. He appreciated NBP’s pledge to support the social housing projects and assured his personal support in promoting such initiatives in future. He thanked the President of NBP for his personal presence at this occasion.

According to MoU, the NBP would provide financing for the construction of about 200,000 houses by the Provincial Housing Authority (PHA) KPK for the low-income provincial government employees at affordable cost and easy installments.

He acknowledged that NBP has shown its commitment to the province by extending various facilities to a number of stakeholders. He stated that CM of KPK has travelled to Islamabad and wanted to welcome the NBP President on this occasion but he couldn’t attend due to some urgent official commitment. The advisor expressed the government’s commitment to the social housing sector and appreciated efforts of the DG Mr. Usmani and NBP team who worked hard to conclude the deal.

He thanked all the dignitaries for gracing this occasion. He said that the presence of all the dignitaries is a proof of his government’s pledge to support the less-privileged and promote the affordable housing in KPK province. He appreciated the efforts of NBP team and Mr. Saifur Rehman Usmani for his active participation and close interaction to make it happen.

If you are not the intended recipient of this email then please delete it without copying, distributing or disseminating the contents of the same. If you are not an addressee, please inform the sender immediately and destroy this e-mail. Do not copy, use or disclose this e-mail or any information contained herein.

Bilawal in KP while Imran targets PPP heartland in Sindh.