Israelites have re-elected Netanyahu as their PM, one who is indicted in corruption cases. Benjamin Netanyahu is the longest-serving premier of Israel. 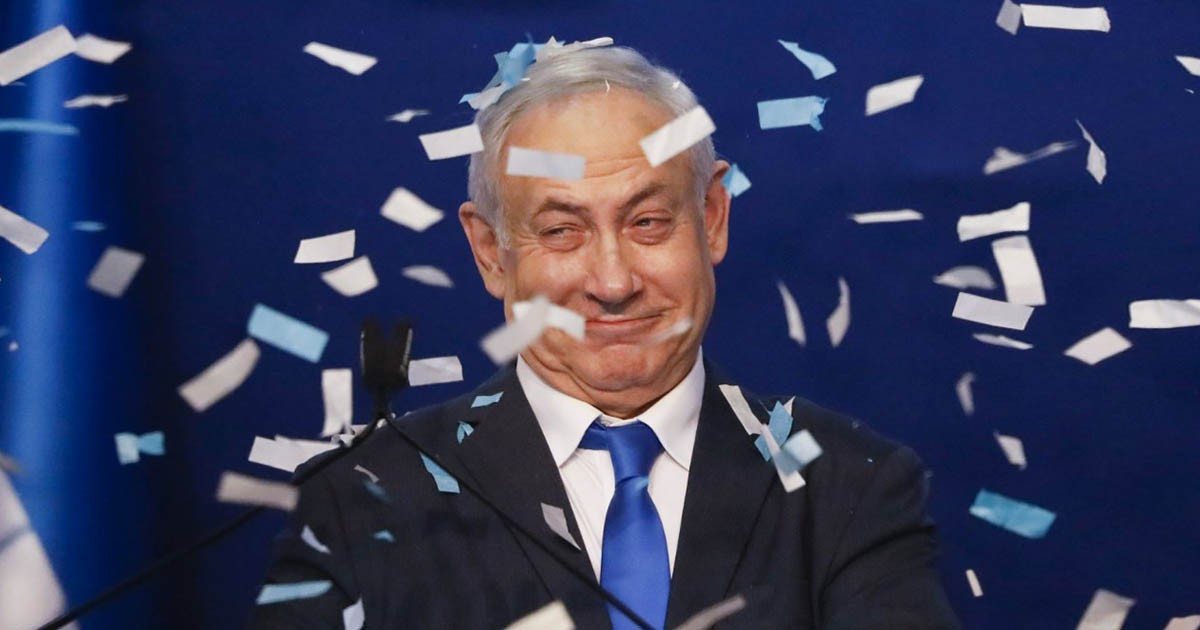 Prime Minister Benjamin Netanyahu claimed victory on Tuesday in Israel’s general election, with exit polls putting the indicted premier in a strong position to form the next government.

Monday’s election, Israel’s third in less than a year, was called after inconclusive votes in April and September left the Jewish state in a political deadlock.

That would mark the party’s best-ever result under Netanyahu, who first served as premier from 1996-1999 and whose current tenure began in 2009.

The estimates gave Likud and its right-wing allies, including ultra-Orthodox parties, 59 seats — two short of a majority. Likud’s main challenger, the centrist Blue and White party, was projected to win between 32 and 34 seats.

Counting its centre-left allies as well as the mainly Arab Joint List alliance, the anti-Netanyahu camp was expected to control 54 to 55 seats. While there remains no guarantee that Netanyahu can form a coalition, he hailed Monday’s election as a “giant” success.

“This is the most important victory of my life,” he told a boisterous crowd of supporters in Tel Aviv. In a statement, Likud said Netanyahu had spoken to all the heads of right-wing parties and “agreed to form a strong national government for Israel as soon as possible”.

Blue and White’s leader, ex-military chief Benny Gantz, admitted “disappointment” with the result. But he stressed that regardless of the final tally Netanyahu is still due to go on trial on March 17 after being charged with bribery, fraud and breach of trust. “In two weeks, he will be in court,” Gantz said.

The president of the Israel Democracy Institute think-tank, Yohanan Plesner, said the projections showed that Netanyahu had “won a significant political mandate from the Israeli people”.

But, he added, the country was heading towards “unprecedented” legal uncertainty as the probable head of government will be forced to “fight to clear his name in court”.

While Netanyahu will likely be tapped by President Reuven Rivlin to form a government, his path to a 61-seat majority remains unclear.

The projections indicate that the secular, nationalist Yisrael Beiteinu party won six or seven seats and may again be able to play kingmaker, the same position it was in following the April and September votes.

Party leader Avigdor Lieberman served as defence minister in a previous Netanyahu government and his support would easily put Likud over the crucial 61-seat line. But after the September vote Lieberman said he would only join a government of national unity — ruling out cooperation with the ultra-Orthodox parties allied to Netanyahu and the Arab camp that backed Gantz.

“There is no choice but to wait for the final results and only then conduct a situation assessment,” Lieberman said after the exit polls were released. Despite again falling short of a majority, the mood in the Likud camp was celebratory.

The premier campaigned on his tough position towards the Palestinians and on Jewish settlements in the occupied West Bank.

Bolstered by US support, Netanyahu has campaigned on building thousands more homes in Jewish settlements in the Palestinian territory, even though they are considered illegal by the international community.

Reacting to the result, chief Palestinian negotiator Saeb Erekat said the exit polls showed that “settlement, annexation and apartheid had won”. Gantz, a security hawk, was also supportive of the Trump plan, sparking criticism from the left that he did not offer a real alternative to Netanyahu.

The election was being held amid the coronavirus epidemic, with two new cases confirmed Monday — raising the tally in Israel to 12. Another 5,600 Israelis are under self-quarantine, many of whom visited countries where the virus is prevalent.

At 18 special polling stations, those under quarantine met election staff in full protective suits and masks. Voters had to wash their hands and wear gloves before casting their ballots, presenting their ID cards to election officials separated by plastic sheets.

Joe Biden is competing against Trump & the coronavirus crisis: Can he succeed?