Reports emerging from Indian media reveal that the Indian foreign ministry has apprised officials in Washington, particularly US Secretary of State Mike Pompeo and NSA John Bolton. Analysts believe that the US must avoid being a bystander in the conflict that threatens peace and stability in South Asia. 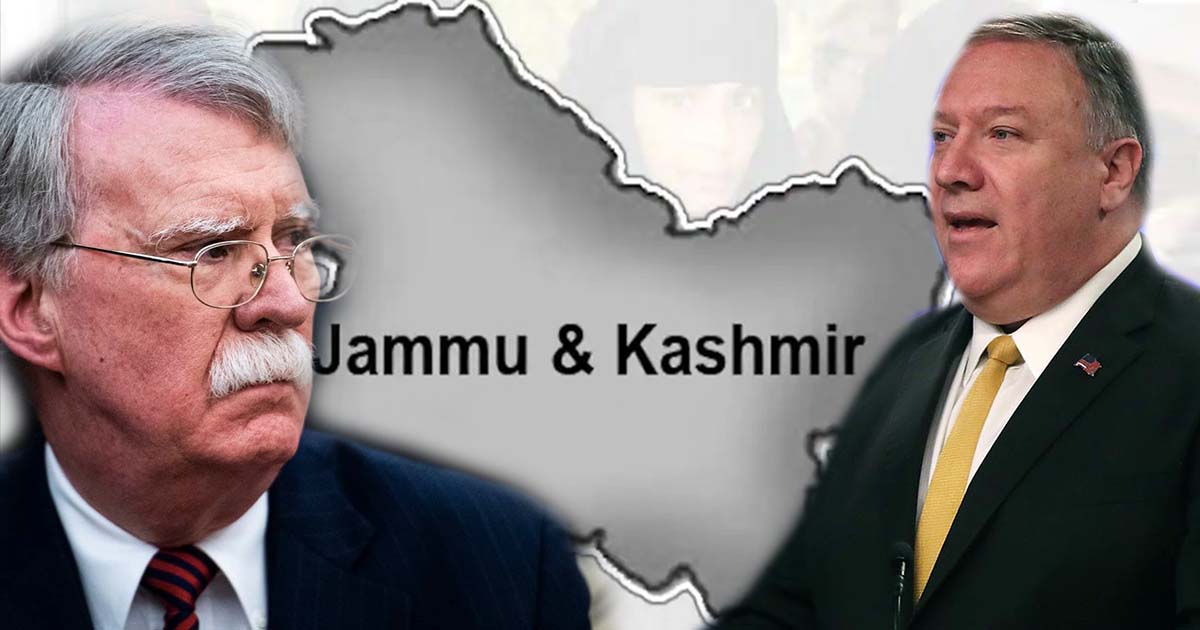 Reports emanating from Indian media reveal that before scraping away the special constitutional status of Indian Occupied Kashmir (IoK), the External Affairs Minister of India, S Jaishankar, had apprised the US government, specifically US Secretary of State Mike Pompeo, of the agendas of the Modi-led government with regards to the occupied Himalayan territory.

On Monday, Indian Prime Minister Narendra Modi and Amit Shah, the Minister of Home Affairs of the Bharatiya Janata Party (BJP) government scraped away Article 370 from the Indian Constitution, which provided a special constitutional status to Jammu & Kashmir.

Reports published by Indian news daily, The Print, cited sources within the Indian governments, who divulged that the US government was fully aware of the objectives of the Modi-led government with regards to Indian occupied Kashmir.

An excerpt from the report reads, “This, however, was not the first time that the US was briefed on this issue.” The report reveals that the Modi-led government had briefed the US National Security Advisor John Bolton with regards to the plans to abolish Article 370 back in February, following the Pulwama attack.

These are aimed at providing good governance, promoting social justice and ensuring economic development in Jammu and Kashmir.

The Print noted, “In February, two days after the Pulwama attack, National Security Advisor Ajit Doval had phoned his American counterpart John Bolton and told him about the Modi government’s plans to do away with the ‘special status’ for Jammu and Kashmir.”

However, the sources within the Indian government noted that the decision to divide the occupied Himalayan territory into two separate federally administered territories was taken later.

The Print noted that Indian Foreign Minister S Jaishankar had met with US Secretary of State on the sidelines of the Foreign Minister’s Meeting of the Ninth East Asia Summit, held in Bangkok on 1st August.

During this meeting, Jaishankar informed Pompeo that New Delhi does not seek US mediation in the Kashmir dispute, and any discussion on the issue of Kashmir, “if at all warranted,” will take place with Pakistan unilaterally.

The sources reveal that when it came to Washington, the Modi-led government did not “want to take a chance”, and all necessary precautions were taken to inform the Trump administration of the decision. The sources further added that the Indian Ministry of External Affairs had also apprised the representatives of Russia, China, France and the UK before abolishing the special constitutional status of Kashmir.

Moreover, the envoys of the 15 members of the United Nations Security Council (UNSC) were also informed of the developments. Throughout these briefings, New Delhi maintained that the proposals being discussed in the Indian Parliament are strictly the internal matters of India.

The source within the Indian government noted, “These are aimed at providing good governance, promoting social justice and ensuring economic development in Jammu and Kashmir.”

Veteran diplomat K.C Singh, speaking to The Print, noted that India has made a well-calculated decision and the international community has not reacted against this movie.

K.C Singh said, “There has been no international reaction yet on this issue, which shows that India had done its calculations well in advance.”

Achakzai noted that by altering the status of occupied Jammu & Kashmir, India has crossed a red line, and the US must not act as a bystander.

With regards to Washington, K.C Singh noted, “And the US being an important and crucial member of the P-5, it is imperative to see how it reacts. If it ignores the move, then perfect. If it does not, then India should be worried.”

US Cannot be a Bystander

Narendra Modi and Donald Trump are expected to meet at the G-7 Summit, scheduled to be held in August in France. The Indian Prime Minister is also expected to engage in a bilateral meeting with the US President in September when Modi will arrive in Washington to attend the UN General Assembly.

All eyes are on US President Donald Trump after Prime Minister Imran Khan urged that now is the time for Washington to intervene and resolve the conflict.

Jan Achakzai, seasoned political analyst, commented on the news circulating in India media and revealed that Pakistan was well aware of this correspondence between New Delhi and Washington.

Achakzai observed, “We knew it: India cannot cross the red line without the US knowledge, complicity, or nod depending on scope of info shared with Washington DC.”

1/3) #Indian media suggests #US was taken on board a week ago. It was occasion when Indian FM J Shankar met Secretary Pompeo.

We knew it: India can not cross red line w/out the US knowledge, complicity, or nod depending on scope of info shared w/ DC.

If true it will send.

The Baloch analyst further added, “After all, India’s one aim was 2 snub Donald Trump when he offered mediation on Kashmir. Then meek response of State Depart was also a reflection of the fact that Washington was not surprised & that it was OK with additional force & undoing of 370.”

After all, #India’s one aim was 2 snub #Trump when he offered mediation on Kashmir.

Achakzai noted that by altering the status of occupied Jammu & Kashmir, India has crossed a red line, and the US must not act as a bystander.

He said, “Any conflagration will likely bring South Asia on the brink of disaster. No deterrence operates if it loses fear of being used. No middle ground leaves Pakistan with hard choices and the US cannot be a bystander.”

3/3) Modifying status of J&K is a red line 4 🇵🇰, 🇮🇳 crossed.
It will weigh all options.

Any conflagration will likely bring SA on brink of disaster.

No detternce operates if it looses fear of being used.

No middle ground leaves 🇵🇰 w/ hard choices #US can not be bystander.

Pakistan and India in post-Pulwama scenario: Is the threat of War over?