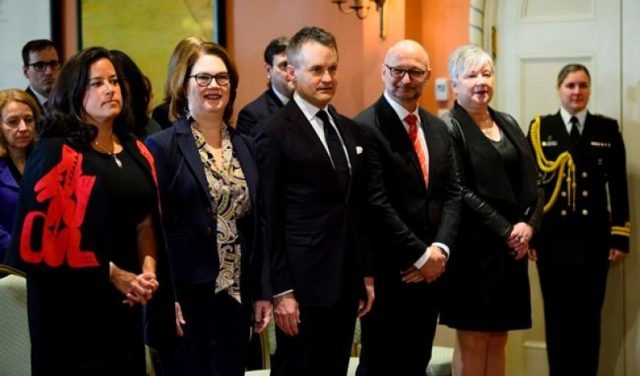 According to reports, the Federal Cabinet of Prime Minister Imran Khan is all set to be expanded with up to five to six new ministers joining it. The expected names are Muhammad Mian Soomro, Ali Amin Gandapur, Zartaj Gul, Azam Swati and Faisal Wada.

Last month, the prime minister inducted four new ministers into his cabinet, taking the total strength of the federal cabinet to 24.

According to Sources, the MNA Muhammad Mian Soomro will be most likely allotted the Ministry of Privatization. Muhammad Mian Soomro is Jacobabad based banker who served as the Chairman of the Senate from 2003 to 2009. Soomro hails from an influential Sindhi feudal family that has been active in national politics since 1923. He was Prime Minister of Pakistan in an acting capacity from 16 November 2007 to 25 March 2008 to oversee the 2008 General Elections and became the 3rd Acting President of Pakistan upon the resignation of Pervez Musharraf on 18 August 2008, both by virtue of his office of the Chairman of the Senate.

The former premier joined the PTI in June 2018. Initially, he was to be sworn in as state minister of Privatization but he refused to be sworn in. However, it seems that things have worked out and he is all set to become a minister.

Sources are asserting that Azam Swati will be awarded the Ministry of Science and Technology. In essence, he is returning back to his old position that he held from 2008-2011. Swati, a veteran politician worked up from the mayor of Mansehra to become a senator first as an Independent and then under the banner of JUI-F. However in 2011, he was dismissed for relentlessly pursuing Hamid Saeed Kazmi’s alleged corruption in the Haj Scandal. He left the JUI-F and joined the PTI working tirelessly against all forms of corruption. He is currently asserted to be on of the richest members of Parliament.

She was elected to the National Assembly of Pakistan as a candidate of Pakistan Tehreek-e-Insaf (PTI) from NA-191 (Dera Ghazi Khan-III) in Pakistani general election, 2018. She received 79,817 votes and defeated Awais Leghari. She is well known for defeating two important clans namely the Legharis and the Khosas in the recent general elections held on July 25 in that conservative area. Because of this feat, she is often widely hailed as being the manifestation of the PTI’s slogan of Tabdeeli (Change). She is most likely to be awarded the Ministry of Climate Change.

Faisal Wada is one of the most prominent faces of Karachi’s PTI. Vawda was elected to the National Assembly of Pakistan from Constituency NA-249 (Karachi West-II) as a candidate of Pakistan Tehreek-e-Insaf in Pakistani general election, 2018. He received 35,344 votes and defeated Imran Khan’s archrival Shahbaz Sharif. Faisal Vawda is also expected to be inducted into the federal cabinet, but his portfolio is yet not known.

Previous articlePakistan needs to focus on its “Pilgrimage Economy”
Next articleIs Modi’s India building a Solar Alliance to replace OPEC?

Targeted killings in Rawalpindi: Who is responsible?