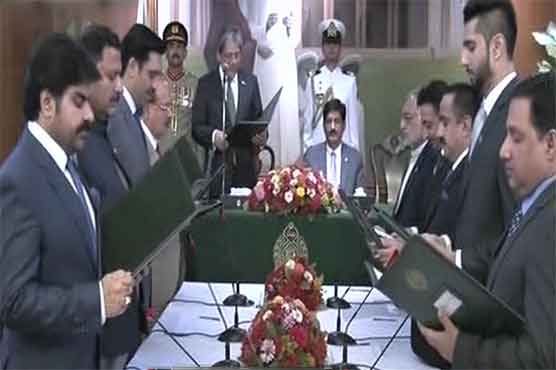 The Prime Minister’s cabinet in ‘Naya Pakistan’ took oath today in the early hours of today. The President of Pakistan, Mamnoon Hussain, administered the oath to the 21 member cabinet. Yesterday, the Prime Minister of Pakistan, Imran Khan, delivered his first keynote address to the nation in which he outlined the important points his government will focus on. Now, his team of ministers and advisors has been officially anointed.

There are immense challenges that the Prime Minister and his cabinet will have to face. Problems in the economy and the society had been accumulating under previous governments. The oaths of office for the President, Prime Minister, Federal Ministers or Ministers of State or Provincial Ministers, the governors and various other high ranking posts are given in the Third Schedule of the constitution.

The five Schedules are given after part 12 in the text of the constitution of Pakistan before the amendments are mentioned. An oath of office has legal significance since the person taking the oath can be punished under the law if he is found to guilty of abdicating his responsibility assumed while assuming office. When the Quaid-e-Azam took his oath of office as the first Governor-General of Pakistan, his oath was administered by Sir Abdul Rashid, Chief Justice of the Lahore High Court. Oaths are a way to cement a solemn promise of adherence to law and avoidance of conflict of interest.

There are 15 ministers in the cabinet of Imran Khan. Critics have said that in “New Pakistan”, 9 out of these 15 ministers were already present in the regime of General Pervaiz Musharaff. Similarly, Dr. Ishrat Hussain, a banker, an economist who is now an advisor to the PM on Institutional Reforms and Austerity was also an advisor to Musharraf when he was President. Shah Mehmood Qureshi, appointed as the Foreign Minister, held the same office during the government of the Pakistan Peoples Party as well.

However, supporters have argued that ministers and advisors having prior experience in governance are actually good for the country. They know the ropes, so to speak. Furthermore, not all members of the cabinet are career politicians or people who have been in and out of public office throughout their life. Asad Umer, the new minister of finance, was formerly the Chief Executive Office of Engro, a Pakistan-based public multinational corporation with its headquarters in Karachi.

It has subsidiaries involved in the production of fertilizers, petrochemicals etc. Revenue of Engro is estimated to be nearly Rs 160 billion annually. There is an expectation that Mr. Asad’s Umer experience as CEO of a successful corporation will be an asset as he takes on the finances. He was awarded the Sitara-e-Imtiaz for his service to the public in 2009.

The roadmap outlined in the speech, if followed in letter and spirit, will go a long way in taking the country out of the problems it is suffering from.

Mr. Malik Amin Aslam, the new minister of the environment was also the minister of state for environment in the regime of Musharraf and has several articles to his name on the environment and climate change. He has a degree in Electrical Engineering, an MBA in Finance and an MSC in Environmental Management from Oxford University. The billion trees Tsunami in KP was the brainchild of Amin Aslam. The Prime Minister has pledged to populate the country with trees under a project similar to the one in Khyber Pakhtunkhwa. It would appear that the right man has been in the right job.

Muhammad Shehzad Arbab, a career civil servant who has formerly served the federal secretary for the Ministry of States and Frontier Region as well the Chief Secretary of KP, has been appointed as an adviser to the Prime Minister for the establishment. Dr. Ishrat Hussain, a world-renowned economist who has advocated for reform in the civil service, was conferred the Hilal-e-Imtiaz in 2003 and the highest civilian award of Nishan-e-Imtiaz in 2016 for outstanding public service, is likely to have the Prime Minister’s ear on the key issue of strengthening institutions in the country. Still, there are grounds for criticism on the selection. The Minister of Information Technology doesn’t seem to have prior experience in this field.

The cabinet has its work cut it for them. Currently, Pakistan is ranked 147th in the UNDP’s Human Development Index. About half of the country is illiterate. Over 20 million children are out of school. Forested areas in Pakistan are less than 3%. The country is increasingly becoming water-stressed and may even be water-scarce in the near-future. Pakistan is one of the top ten countries most vulnerable to climate change.

The Prime Minister touched upon at dozens of the key issue facing the country. He addressed the need for increasing the tax net, civil service reform, police reforms in collaboration with the Sindh government. He emphasized the need of getting out of the debt trap at the beginning of his speech and touched upon the issue of education, environmental pollution before closing his speech with a desire to have friendly relations with all neighbors. There has been a sense of optimism expressed by citizens on social media.

read more: Are you ready to play under Khan’s captaincy?

Some are arguing that the keynote address was important as it has given a sense of direction to the policymakers as well as giving citizens an idea of what exactly to expect from the government. Still, others have said that achieving all of these goals is not going to be easy. Even though the challenges the country faces are immense, the Prime Minister said a number of times in his speech to not be afraid of these challenges. The roadmap outlined in the speech, if followed in letter and spirit, will go a long way in taking the country out of the problems it is suffering from.