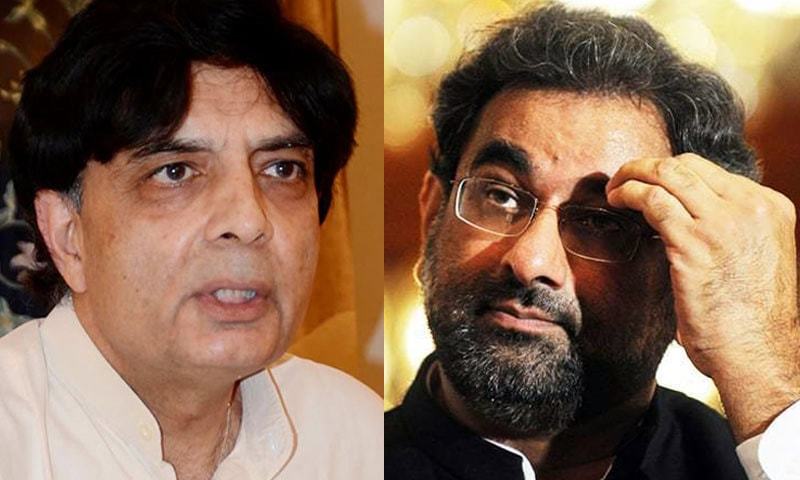 Prominent PML-N politician Chaudhry Nisar Ali Khan said on Tuesday that his party wanted the next general elections to be held on schedule. The statements are at odds with the current acts of the party who are seeking to delay the polls in 2018.

Mr Khan was speaking to the press after offering condolences for the death of PML-N MPA Chaudhry Liaquat Ali Khan, who passed away on October 30th. “The PML-N is a political and democratic party and our sole motive is that the next general elections should be held in due time,” he said, adding that the party was doing its best in this regard.

Read more: Nisar sounded desperate on Supreme Court Commission report but he had…

In response to a question about his differences with other party members, Mr Khan said: “Differences of opinion are necessary for any political party but unfortunately some people take such differences in a negative way. One should express the right opinion to another person rather than the opinion he or she wants to listen to.”

Chaudry Nisar may be calculating that in the 2018 elections he can still win his seats while the “Lahori” group will suffer.

Chaudhry Nisar has been highly vocal in the recent months over the conduct of PML (N). His most recent criticism was lambasting the party as being controlled by self-interests soon after a meeting of PML (N) bigwigs in London. His most dangerous diatribes were attacking Maryam Nawaz, the heir apparent of Nawaz Sharif as well as duelling with interior minister Ahsan Iqbal.

His statements of PML (N) wanting 2018 elections on time seem to be on par with the party avowed aims. However, observers cite that PML (N) declarations of desiring timely polls are no more than eyewash. PML (N) is apprehensive of a timely 2018 elections as they feel that in such a scenario their opponents would batter them.

PML (N) is already reeling from the Panama case verdict that has its leader disqualified for life from electoral politics. Their motherland of Punjab is besieged from environmental crises like the smog that has been attributed to PML (N)’s policies. The economy is in a free fall with declining exports and shrinking foreign reserves. To top it all off, the energy crisis which PML (N) claimed to have vanquished has returned with force.

PML (N) is already reeling from the Panama case verdict that has its leader disqualified for life from electoral politics.

PML (N)’s apprehensions have been reinforced with lacklustre electoral performance in both NA-12 and NA-4. Therefore, according to neutral observers, the party is seeking to delay the elections for a more opportune time. They are using the delimitation crises sparked by the current census to delay the elections.

Yet it seems that not all PML (N) leaders are onboard. Chaudry Nisar, now seen as a renegade, is not averse to a timely election. His thinking probably stems from the internal rivalry plaguing the party. Chaudry Nisar is said to be in a tug of war with the “Lahori” group within the PML (N). This group consists of Ishaq Dar, Khawaja Asif, Pervez Rashid, Ahsan Iqbal and Ayaz Sadiq. This rose to prominence after the May 2013 elections that saw the loosening of Chaudry Nisar’s grip over Nawaz Sharif.

Prominent PML-N politician Chaudhry Nisar Ali Khan said on Tuesday that his party wanted the next general elections to be held on schedule.

Chaudry Nisar may be calculating that in the 2018 elections he can still win his seats while the “Lahori” group will suffer. His machinations may arise from the voting patterns that prevail in the various areas. Chaudry Nisar holds a strong position in rural and semi-urban areas where clan loyalty or “biradriyism” often dominates voting patterns. His rivals come largely from urban areas where swing voting and shifting voter preferences are common.

Read more: Nawaz versus Shahbaz: A battle for influence within PML-N

It can be asserted that Nisar desires timely elections in order to emerge as the strongest faction within PML (N). Another possibility to be considered is that Nisar’s statements are merely rhetoric like the rest of his party.

Sarfraz believes Pakistan can be even better against England

Trump and Kim raise summit hopes after days of brinkmanship