Government's designated crisis management organization, NLC, has yet again proven itself helpful. To deal with the current wheat crisis, NLC has been transporting over 200 wheat-laden long vehicles everyday, to meet the demand of local markets. 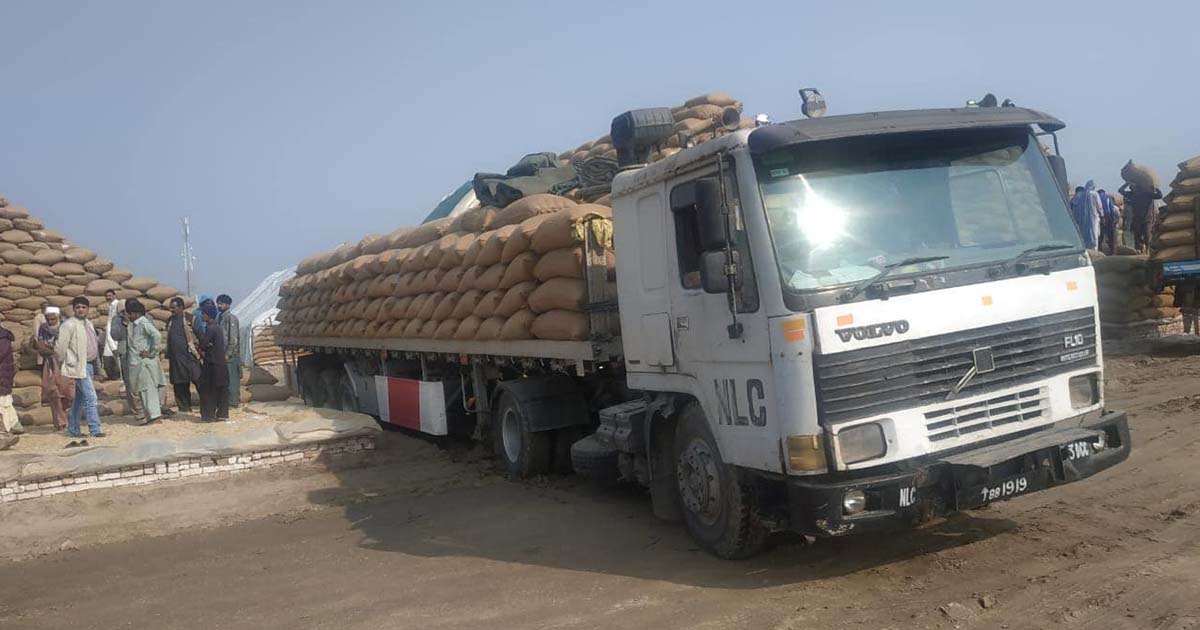 National Logistics Cell (NLC) is working daily to help the government curtail the current wheat crisis. Wheat transportation operation is continuing with full swing and around 200 long vehicles are being dispatched daily from various storage points of Pakistan Agricultural Storage and Services Corporation (PASSCO) in Punjab and Balochistan.

Our country is facing an oblong wheat crisis at present. Markets show shortage throughout the country, despite consistent production of the product. To answer questions rising from everywhere, Federal Minister for National Food Security and Research, Makhdoom Khusro Bakhtiar held a press conference on Sunday, 19th January. On the occasion, he reassured the attendees by announcing that sufficient wheat stocks are available in the country to fulfill domestic requirements of flour for some time.

Moreover, he expressed determination to take strict action against those involved in creating an “artificial crisis” through hoarding and profiteering.

The Economic Coordination Committee (ECC) has given approval for the import of 0.3 million tonnes of wheat without regulatory duty, which will help overcome the flour crisis in the country. pic.twitter.com/wci9LJZHeb— Developing Pakistan (@DevelopmentPk) January 20, 2020

At the press conference, Makhdoom Khusro explained the multiple factors responsible for the national wheat flour crisis, “transporters’ strike in Karachi affected the supply of wheat flour to local markets in Sindh and the inter-provincial ban on wheat supply to curb smuggling caused a crisis in Punjab and Khyber Pakhtunkhwa (KP)”.

“Both cases disrupted the supply in local markets and by addressing the root cause, we have been somewhat successful in bridging the gap between demand and supply,” he said, adding that the price of wheat flour would decrease in a few days.

Taking notice of the situation at hand, Prime Minister Imran Khan appointed a high-level committee, on Wednesday 22nd January, to investigate the shortage of one of the most basic commodities across the country.

Read more: NLC and Hashoo Group partner up to build a resort in Gilgit Baltistan

According to the PM’s instructions, the four-member committee will be headed by the Federal Investigation Authority (FIA) director-general, a representative (not below BS-20/21) of the Intelligence Bureau, the director-general of Punjab Anti-Corruption Establishment and any other member selected by the FIA DG.

The investigation committee, which has been asked to submit its report by February 6, will disclose in detail, the causes of the shortage, “circumstances leading to the wheat/flour related controversy and assess the future stock that lead to allow export of wheat/wheat products and subsequent imposition of ban on exports”.

At the press conference, Khusro further said that wheat supply for Karachi was enhanced to 10,000 metric tonnes from 9,000 metric tonnes and wheat-laden trucks, supplied by the National Logistics Cell, had already left for their destination. He added that the federal government had informed the Sindh government that it can procure additional 50,000 tonnes from Pakistan Agricultural Storage and Services Corporation’s (PASSCO) warehouses.

Khusro disclosed that around 40,000 metric tonnes of wheat is smuggled to Afghanistan per month. Special measures will now be taken to curb this trafficking in order to ensure a smooth supply to the local markets

According to NLC officials, “the lifting operation started on 10th January with its integral fleet during countrywide strike by private transporters. NLC is geared up to complete the transportation operation well before the stipulated date of  28th February. A total of 302,000 tons of wheat will be transported from PASSCO godowns located in Khanpur, Khanewal, Vehari, Bahawalnagar, Borewala, Multan Sahiwal, Alipur and Dera Allah Yar, to Karachi and Hyderabad, Sindh Food Godowns”.

It is to be noted that the output of the national wheat crop reduced by 1.2 million metric tonnes last year. On this account, Khushro announced that the government has decided to import wheat to create a buffer stock in the country. He said that the government has fixed the price of wheat to Rs1,365 per 40kg and it has set a purchase target of 2.7 million metric tonnes for the next year.

Responding to a question, he said that the incumbent government prioritizes the agriculture sector and has initiated development projects worth Rs 300 billion to enhance the output of major crops, including wheat. He further said that the government would also abolish Gas Infrastructure Development Cess (GIDC) on fertilizers which will help in reducing the price of urea by around Rs 400, per bag.

Read more: Countrywide wheat crisis to be investigated by FIA

An important aspect of the crisis is smuggling of the crop. Khusro disclosed that “around 40,000 metric tonnes of wheat is smuggled to Afghanistan per month. Special measures will now be taken to curb this trafficking in order to ensure a smooth supply to the local markets”. He also said that a special helpline was established to monitor wheat supply in local markets and wheat procurement targets were also enhanced from six million metric tonnes to eight million metric tonnes to facilitate strategic reserves for local requirements.

The NLC official further revealed that about 7000-10000 tons of wheat is being transported on daily basis and so far, more than 55725 metric tons of wheat has been lifted through 1209 vehicles from the storage points of PASSCO. This emergency operation was imminent to replenish and maintain the wheat supply in local markets.

NLC, being the appointed crisis management organization of the government, played a commendable role in the situation at hand. In fact, National Logistics Cell has been resolving logistical crises in all emergencies and natural calamaties since its incpetion in 1978.