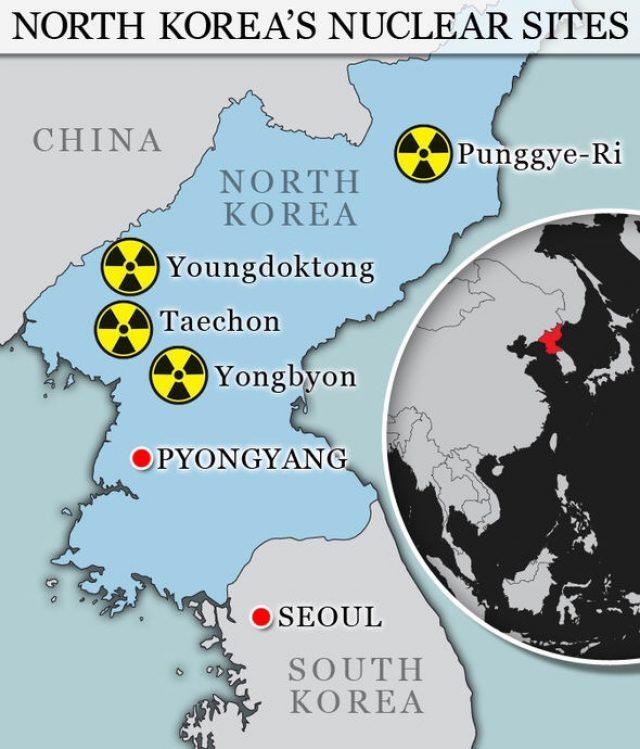 However, they seem ready to cap their nuclear weapons program for economic and diplomatic advantages, and also ready to turn the demilitarized border zone into the zone of peace and prosperity with the consent and cooperation of South Korea. Washington asked Pyongyang to share with it a list of their nuclear weapons, materials, and facilities. While Pyongyang has been insisting for the end of the 1950-53 Korean War declaration, as a first step to end the protracted conflict in the Korean peninsula.

The review of the current nuclear politics reveals that China, Indian, Pakistan, Russia, and the United States are modernizing their nuclear arsenals. North Korea is using its nuclear capability to engage Trump administration for economic, political and security gains.

However, North Korea announced to halt the production of the weapon-grade fissile material by stopping and then dismantling the 5-megawatt plutonium production reactor operative at the Yongbyon nuclear complex. Without the verification, one cannot validate their claims, even if they announce the closing of the reactor.

The Americans have expressed their interest to work with the North Koreans in the joint civilian nuclear projects for the sake of verification. In cooperative projects the verification becomes possible, “because you are there, you are talking with the people, seeing the facilities.” Although, Pyongyang promised to halt its further testing of nuclear weapons and end of long-range missile tests, yet it is hesitant over the complete cessation of its weapon-grade fissile material production.

It was reported that during September18-20, 2018, inter-Korean summit, North Korea had offered to shut down its experimental nuclear reactor located at Yongbyon nuclear complex in exchange for reciprocal measures by the United States. A joint statement, adopted by Chairman Kim and President Moon after the talks, said that Pyongyang would make similar steps toward denuclearization if the United States honors the agreements reached during the June 2018 Singapore summit of US President Donald Trump and North Korean leader Kim Jong Un.

The complete denuclearization seems unacceptable to the North Korean because the nuclear weapons capability provides them sovereign defense.

According to that agreement, ‘North Korea agreed to the goal of “complete denuclearization” in exchange for “security guarantees” by the United States, including an end to enmity.’ The Americans are interested in the cessation and verification of activities at Yongbyon because it is a huge nuclear facility. Nuclear Threat Initiative (NTI) reported that ‘North Korea’s nuclear facilities span the complete nuclear fuel cycle, with most of these facilities concentrated in Yongbyon County, North Pyongan Province.

Chairman Kim’s willingness to close the nuclear reactor located at Yongbyon nuclear complex is an important breakthrough because shutting of the said facility is problematic for him. North Korea has been using it for producing weapons-grade plutonium. The substantive denuclearizing occurs in four stages, i.e. halt of the weapons-grade fissile material production; second closing of testing sites, third rollback of the weapons program or redesigning the weapon nuclear facilities into civilian nuclear facilities, and fourth the elimination of the weapons-grade fissile material—weapon-grade enriched Uranium and Plutonium.

It was reported that during September18-20, 2018, inter-Korean summit, North Korea had offered to shut down its experimental nuclear reactor located at Yongbyon nuclear complex in exchange for reciprocal measures by the United States.

Hence, the closing of the facility would be the first step towards denuclearization of North Korea. Moreover, North Korea had blown up of the Punggye-ri nuclear test site, which was a substantial step to satisfy the Americans after the Kim-Trump Summit. Importantly, according to the western intelligence agencies’ reports, North Korea had secretly built another facility to produce highly enriched uranium for weapons.

Therefore, the closer of Yongbyon nuclear facility will not suspend completely the production of weapon-grade highly enriched uranium, but the shutting down of the facility certainly slows the weapon grade Plutonium production, significantly. The closing of a nuclear reactor would likely stop the North’s production of plutonium because it probably had not built reactors outside of the Yongbyon complex.”

The review of the current nuclear politics reveals that China, Indian, Pakistan, Russia, and the United States are modernizing their nuclear arsenals. North Korea is using its nuclear capability to engage Trump administration for economic, political and security gains. The Treaty on the Prohibition of Nuclear Weapons has failed to attract the nuclear weapons states and also those nations attention that have been enjoying the nuclear security umbrella. In such a situation demanding the complete elimination of the North Korean nuclear weapons is an unrealistic demand.

News Desk - 17 September 2021
On a surprise visit, CM Buzdar takes stern action and removes 15 officers due to negligence of duty and poor performance. Interestingly, this is not the first time CM Buzdar has suspended officers. Like PM Khan, he too frequently changes his team.

The rising tensions between China, US