Nothing Except Resignation Of Imran Khan: Maulana To Violate Agreement

The joint opposition has rejected the offer of the government. No judicial commission is acceptable, Maulana wants fresh elections without involving ECP or courts in the matter. Maulana also warned the Pakistani Army not to meddle in the elections this time. 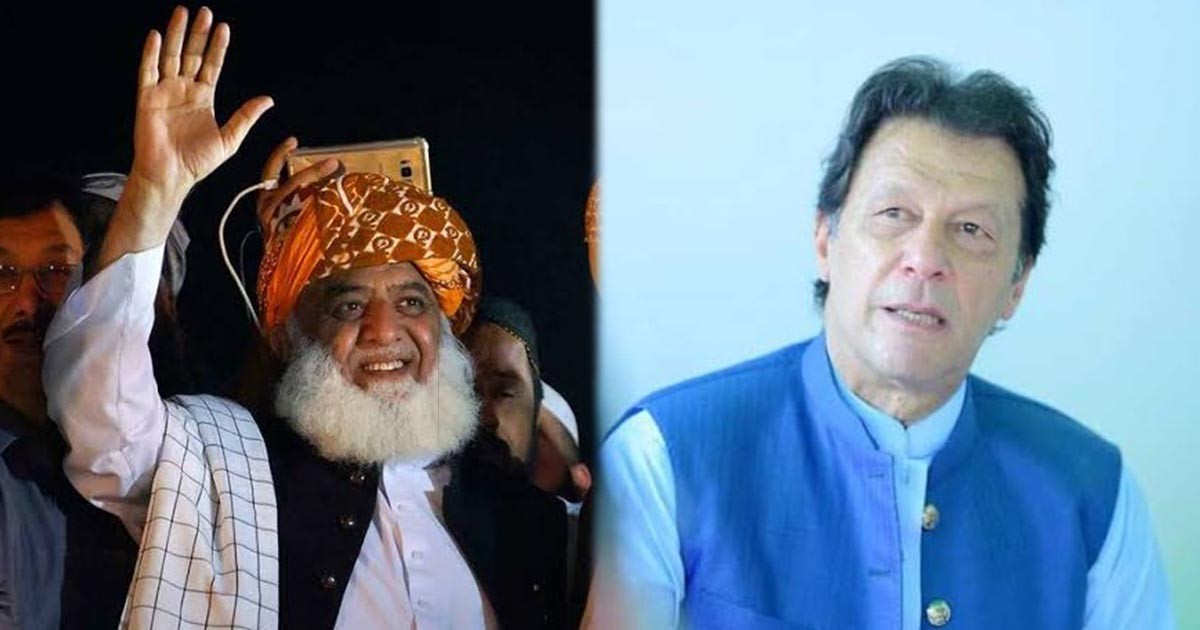 Maulana Fazlur Rehman, chief of Jamiat Ulema-e Islam (F), has categorically rejected the offers made by the government. The committee headed by Defense Minister Pervez Khattak had reportedly offered to form a judicial commission to probe into rigging allegations in the July 2018 General Elections.

Maulana has not only rejected the offer but also warned the government of “moving forward” if it does not announce a date for fresh elections. “We reject every proposal for the formation of a commission and maintain our demand for fresh elections. There can be no change in the matter,” he said.

Maulana has also warned the military establishment without naming that “do not protect an illegitimate government which has to go home”.

Maj Ghafoor also explained that the army personnel were deployed by the ECP and the troops carried out their duties in line with the constitution of Pakistan. “The opposition has a complaint about the credibility of the elections and is dragging the Army into it because of this issue — the Army only fulfilled its constitutional and legal responsibility during elections,” he said.

He also suggested the opposition parties not to destabilize the country but to approach any relevant forum to present their case. “One year has passed since the elections, if they [opposition] still have reservations, then it is their constitutional right to approach the relevant institutions. Taking to the streets and throwing blame around does not solve problems,” he noted.

While addressing the incumbent government, Maulana said that the matter could only be resolved through the resignation of the premier. “Now it’s up to you. The sooner you decide on this, the sooner we can see this matter resolved. If you think this crowd should disperse, then go ahead and give the call. Neither will you remain in a fix and neither will we, then, have any lack of clarity on the matter,” added the JUI-F chief.

Every government in the past two decades had left two things; an empty exchequer and Maulana Fazlur Rehman who remained part of every government. #NationRejectsBarbadiMarch pic.twitter.com/nxtz2r0PHe— Masσσd Khaи🇵🇰 (@smasood801) November 1, 2019

The JUI-F’s chief also spoke on behalf of PML-N and PPP. It is important to note that both former ruling parties’ leaders are facing several corruption-related charges. “Won’t tolerate drama in the name of accountability in this country anymore,” he said, lashing out at the government for its alleged witch-hunting of political opponents.

An Accountability Court in December last year convicted former prime minister Nawaz Sharif and sentenced him to seven years in prison in Al Azizia case while the former PM has been acquitted in the Flagship corruption reference. The court also imposed a fine of $25 million in the Al Azizia case. Nawaz Sharif’s son Hassan Nawaz and Hussain Nawaz were declared absconders in the case. Former President Asif Ali Zardari is accused of money laundering through fake bank accounts. He is in the custody of the NAB. Due to deteriorating health conditions, the former president has been shifted to the hospital.

Read more: Fazal Ur Rehman- Fighting for Islam or Islamabad?

The government has already clarified that there is no point in talking about the resignation of Prime Minister Imran Khan or early elections. “I think these people [Maualna and his aides] are kidding. How can you blackmail an elected government like this by asking for resignation from sitting Prime Minister?” said Usman Dar, PTI’s leader and Special Assistant to PM on Your Affairs.

Media and policymakers have been focusing on the protest for the last six days. Meanwhile, India is making all efforts to control and suppress the voice of Kashmiris. Sources claim that the undue focus of media on this protest has provided India an opportunity to institutionalize its illegal annexation in India-occupied Kashmir. Reliable sources told GVS that the government is considering various options to deal with the protesters in the coming two or three days.

Dr. Moeed Pirzada, a prominent columnist and TV anchor, questions the wisdom behind granting permission to Maulana and his political aides to hold a protest in Islamabad. He believes that the mob can go anywhere now since the leaders have announced that they will not be able to control it if the premier does not tender his resignation.

He suggested that the government should take the nation into confidence on the matter. “Everyone should be told that Maulana is not abiding by the agreement he signed with the local administration,” he said. Dr. Pirzada thinks that a well-shaped narrative shall help the government to create a context in which it can carry out an operation against the miscreants.

FIEDMC and UAF join hands for agricultural development and growth