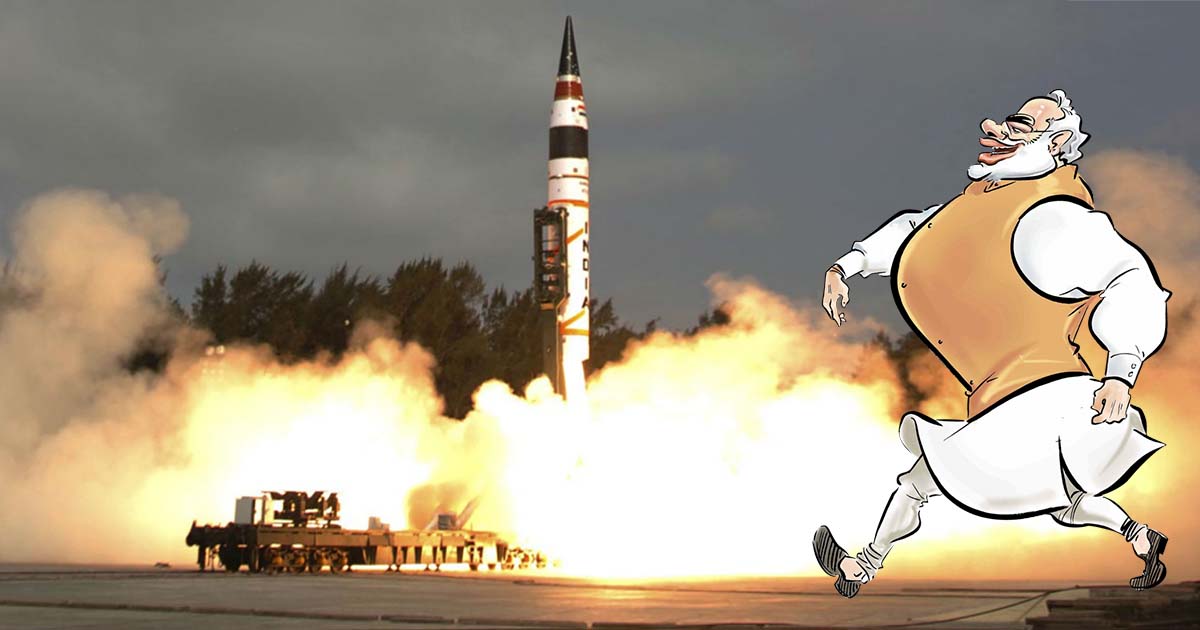 The shifting in India’s nuclear counterforce strategy is not a secret. On 16 August 2019, the Indian Defence Minister Rajnath Singh reconfirmed the swapping of no-first-use (NFU) with first-use (FU) policy. He said, “Till today, our nuclear policy is ‘no first use.’” He added: “What happens in future depends on the circumstances.” The shift in India’s nuclear strategy is insignificant for India’s strategic peers; including Pakistan because, in the nuclear lexicon, NFU and FU policies have identical outcomes during the war.

From the beginning, the Indian ruling elite has been stating, “If they (Pakistan) think we would wait for them to drop a bomb and face destruction, they are mistaken.” Therefore, Pakistani makers of nuclear strategy have not been mistaken. They always argue that India’s NFU policy is neither permanent nor absolute. It has FU policy and is also struggling to acquire both hard and soft counterforce capability.

The irresponsible behaviour of Modi and his RSS cohorts threatens the lives of two billion people residing in the region.

The alarming factor is not only that India has been preparing for preemptive counterforce options, which could unleash destabilizing nuclear arms race in the region; but also the terrifying reality is that India’s nuclear weapons are under a Hindutva Rogue Regime. Besides, right-wing extremist Prime Minister Narendra Modi chair India’s National Command Authority (NCA).

The NCA is a sole body, which can authorize the use of India’s nuclear weapons and the power to press the nuclear button lies with Prime Minister Mr. Modi. Prime Minister Imran Khan rightly expressed his concerns on India’s nuclear weapons under fascist and bigot Modi Government. On 19 August 2019, he tweeted: “The world must also seriously consider the safety and security of India’s nuclear arsenal in the control of the fascist, racist Hindu Supremacist Modi govt. This is an issue that impacts not just the region but the world.”

Ironically, the international community is ignoring the likely repercussions of nuclear weapons in the control of right-wing extremists. Modi himself, during the recent election campaign ‘beat the nuclear drum to stir up his nationalist base.’ On 20 April he said: “Every other day, they used to say ‘we have a nuclear button, we have a nuclear button.’

What do we have then? Have we kept it for Diwali?” While commenting on Modi’s nuclear trigger-happy statement, Shyam Saran, former India’s Foreign Secretary opined: “Many norms have been transgressed and several thresholds crossed in the ongoing Lok Sabha election campaign, whether in the communal and sectarian polarization of Indians or the politicization of the armed forces.

Now another threshold has been crossed by Prime Minister Narendra Modi with his most recent remarks on India’s nuclear weapons delivered in a threatening tone.” Many international nuclear experts ignored the irresponsible nuclear-related statements of Prime Minister Modi due to the election campaign fervour. They thought it was a mere election-winning tactic. They were convinced that after the elections, rationality would prevail.

However, last week, once again India issued a veiled threat to nuclear-armed Pakistan when its Defence Minister said the country’s continued nuclear commitment to “no first use” would “depend on the circumstances.” India has already deployed nuclear-capable delivery vehicles. Indeed, Pakistan adopts countermeasures to deter the fascist Modi Government’s nuclear misadventure. The Hindutva Rogue Regime is playing with fire. Currently, the tension between nuclear-armed India and Pakistan are at the climax.

Indian ruling is contemplating to launch a military attack on Pakistan to divert the attention of the international community and Indians masses from its unconstitutional abrogation of Article 370 and illegal annexation of Jammu and Kashmir including Ladakh Division. Pakistani armed forces are prepared to respond to India’s military misadventure. Both sides, readiness to fight a war is too risky to regional strategic stability.

Thus, the irresponsible behaviour of Modi and his RSS cohorts threatens the lives of two billion people residing in the region. It is also haunting the security and prosperity of the entire world because nuclear attacks cause nuclear winter, which will not confine to geographical boundaries. To conclude, India’s Nuclear Weapons under the Hindu Supremacist Modi Government is a scary reality. Thus, the international community needs to act immediately to save the world from nuclear winter.