The Organisation of Islamic Cooperation (OIC) on Monday rejected US President Donald Trump's peace plan for the Middle East, calling on its 57 member states not to help implement it. 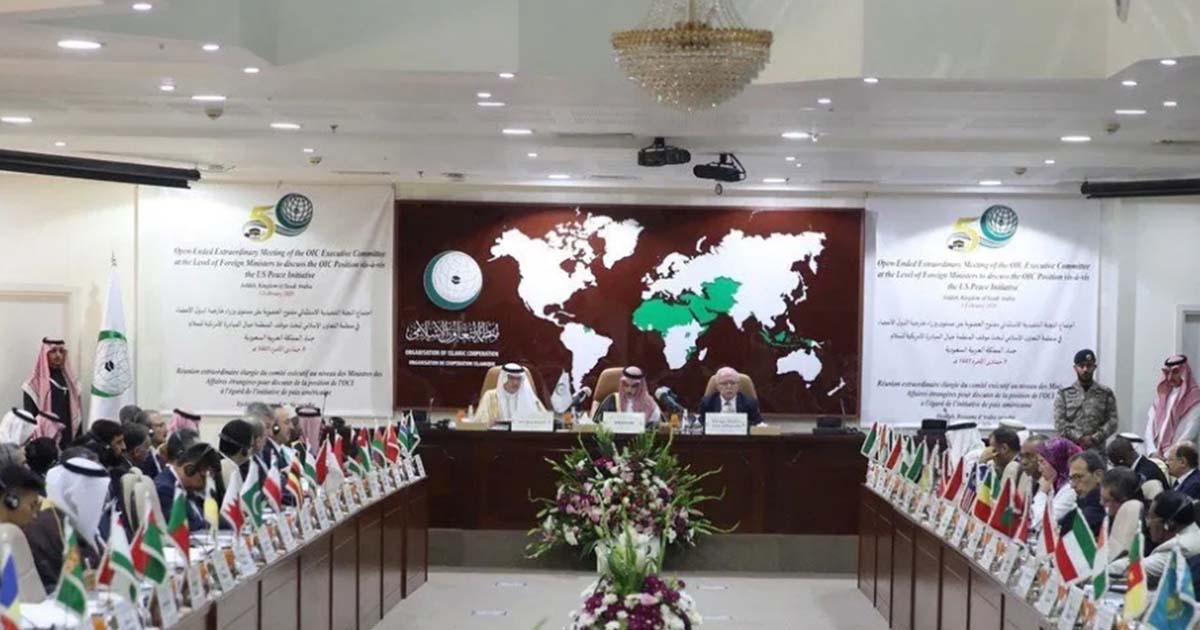 The Organisation of Islamic Cooperation (OIC) on Monday rejected US President Donald Trump’s peace plan for the Middle East, calling on its 57 member states not to help implement it.

The pan-Islamic body, which represents more than 1.5 billion Muslims worldwide, “rejects this US-Israeli plan as it does not meet the minimum aspirations and legitimate rights of the Palestinian people and contradicts the terms of reference of the peace process”, it said in a statement.

A meeting of foreign ministers at OIC headquarters in the Saudi city of Jeddah called on “all member states not (to) deal with this plan or cooperate with the US administration efforts to enforce it in any way or form”.

Resolution Adopted by the Open-Ended Extraordinary Meeting of the #OIC Executive Committee at the Level of Foreign Ministers to discuss the implications of the US Administration's so-called “Deal of the Century”: https://t.co/5KDpF08P4v #Palestine pic.twitter.com/qaPlPILcTK— OIC (@OIC_OCI) February 3, 2020

Under the US plan unveiled last week, Israel would retain control of the disputed city of Jerusalem as its “undivided capital” and annex settlements on Palestinian lands.

Trump’s plan suggests that Israel would retain control of the contested city of Jerusalem as its “undivided capital” but Palestinians would be allowed to declare a capital adjacent to Israeli-annexed east Jerusalem.

The OIC reiterated its support for east Jerusalem as the capital of a future Palestinian state, stressing its “Arab and Islamic character”.

It said peace would “only be achieved with the end of the Israeli occupation, the full withdrawal from the territory of the State of Palestine, in particular, the holy city of Al-Quds Al-Sharif (Jerusalem) and the other Arab territories occupied since (the) June 1967 (Middle East war)”.

Iran -a member of the OIC – was not represented in Monday’s meeting, with its foreign ministry saying that the delegation was granted visas to arch-rival Saudi Arabia “just hours” before the group was to convene.

However, Tehran has already condemned the US plan, saying it amounted to the “treason of the century” and was bound to fail.

The Arab League on Saturday also rejected the controversial plan, saying at a meeting in Cairo that it did not meet the “minimum rights” of the Palestinians.

They insisted on a two-state solution that includes a Palestinian state based on borders before the 1967 war – when Israel occupied the West Bank and Gaza – and with east Jerusalem as its capital.

In his opening remarks on Monday, Palestinian foreign minister Riyad al-Maliki said the plan “cannot be called a peace plan because the Palestinians are not a part of it, and it eliminates all chances of peace”.

Read more: Trump’s ‘Deal of the Century’ is an ‘Israel Lobby’s Master Plan’ against the Muslim World – Part…

Gulf powerhouses Saudi Arabia and the United Arab Emirates said last week they “appreciated” US efforts to reach a Palestinian-Israel agreement in what was seen as a balancing act aimed at appeasing their powerful US ally.

“The plan announced (on January 28) offers an important starting point for a return to negotiations within a US-led international framework,” said UAE Ambassador to the US Yousef al-Otaiba, who – along with Omani and Bahraini envoys –  was at the White House for the announcement.

News Analysis: The Israeli-Palestinian peace plan unveiled by President Trump and Prime Minister Benjamin Netanyahu sounds more like a road map for their own futures than for the Middle East. https://t.co/Ktn9Pwk2Z9

Saudi Arabia said it “appreciates” Trump’s efforts and called for direct Israeli-Palestinian talks while reiterating its “steadfast” support for the Palestinians.

Palestinian leader Mahmud Abbas announced in Cairo during the Arab League meeting that he will cut all ties with Israel and the US.

“We are informing you that there will be no relations with you (Israel) and the United States, including on security cooperation,” he said.

But on Monday he appeared to step back from that statement, implying he had not yet severed ties but still could.

The Trump plan also gives Israel the green light to annex the strategic Jordan Valley — making up 30 percent of the West Bank — and all Jewish settlements, which number more than 200.

“The plan from the beginning carries with it seeds of its demise,” Nevine Mossad, a political science professor at Cairo University, told AFP.

“After all this Palestinian, Arab and Islamic rejection, be assured of its death.”