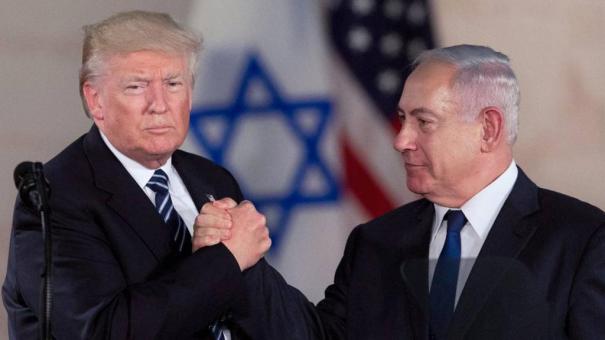 It is time for the Muslim world to unite against the US-led terrorism in the Middle-east.

Firstly, there is a historical pattern of deceit on the part of US and Israel which the Muslim world must not forget. The Muslim governments must raise questions to US and Israel that where is Palestinians’ rights and protection? Why the promises made in Camp David accords, Madrid talks, and Oslo accords are not being implemented in full scale? The Muslim world must realize the fact that recent transfer of US embassy from Tel Aviv to Jerusalem has proved that the US is not willing to compromise on Zionist agenda and will always act against the interests of the Muslim world. Through diplomatic intelligence

Secondly,  the Muslim World must realize the fact that the purpose of this US project is to strengthen Israel’s position in the Middle-east. Egypt, Saudi Arabia, Jordan, and other Arab governments are influenced by the West because their financial and monetary apparatus is controlled by the Western central banks, which are controlled by Israel Lobby’s financial power around the globe.

Pentagon, CIA, and MOSSAD with others are in a hope that the use of ‘Economic and Security stability’ as cover to this grand-project will convince the Muslim World.

Thirdly, Muslim countries must not trust deceptive Pro-Israel US developments either they are in the name of economic or security stability in the Middle-east. Why? Because the study of history has left plenty of evidence that the West has always benefitted the state of Israel at the expense of the Muslim world.  For example; in 2003 US with her coalition destroyed Iraq by doing propaganda about Iraq’s WMD, which were never found. Later, claimed that Iraq War was a mistake.

The truth is it was not a mistake it was a deliberate act to divide Iraq into sectarian conflict. And this strategy of maintaining divide in between Shia and Sunnis is at the heart of US grand strategy of divide and conquer in the Muslim World. The same scenario can be applied to the current Syrian crisis where framing has changed in place of WMD’s has replaced ‘chemical attacks by Assad on Syrians’ and thus ‘Assad must go’.

All of these developments paved the way for the destruction of the current Muslim regimes in the Middle-east which as a result naturally enhance the security of the state of Israel. It’s that simple to understand if anyone understands the role of Israel’s Lobby in shaping the foreign policy of the United States.

The Muslim world must reach the conclusion that this project is intended to create more instability in the region. Pentagon, CIA, and MOSSAD with others are in a hope that the use of ‘Economic and Security stability’ as cover to this grand-project will convince the Muslim World.

The US deal of century has a military objective in the end to form a joint security force where Muslims will fight their own Muslim brothers, which will only create more division in the Middle-east. Because the strategists sitting in the Pentagon and MOSSAD will be in charge of both the joint security force and the militants they have been funding and arming for 18 years. Thus, it will always end up in a win-win situation for US and Israel.

The idea of Saudi Arabia joining hands with Iran is a nightmare for the state of Israel and the United States both in economic and military strategies.

The end game is to carve up the ‘New Middle-east based on Shia and Sunni Countries’ by creating a clash of Sunni joint security force against Iran. Because the strategists know the fact that Iran will retaliate against this grand-project and they will only need a sophisticated propaganda to create confusions in between the Sunni world and Iran. The current ‘Iran Threat’ in the context of the Syrian Crisis is part of the greater game being played.

The Muslim world needs multiple diplomatic strategies to balance Israel’s deceptive Geo-politics. For example; King Abdullah of Jordan is realizing the threat and gave a clear message to Israel when he recently canceled clauses in peace treaty leasing borderland to Israel saying Jordan is exercising her full sovereignty on her lands.

Initially, Russia and China are the best alternatives to checkmate the US strategy. The movement of Saudi capital from the west to east is the key strategy to minimize risks attached to its economy i.e. Saudi Arabia’s assets freeze in the US securities is the main problem that her foreign policy is always being influenced by the United States. It is time for the Saudi Royals to wake up.

A brave Prime Minister like Imran Khan and a determined military leadership sitting in Islamabad is all that we need right now to use Yemen crisis as the best opportunity to bring Iran and Saudi Arabia on the table.

The only method which can eliminate the risk of destruction of the Muslim world is the unity among the Muslim world. The idea of Saudi Arabia joining hands with Iran is a nightmare for the state of Israel and the United States both in economic and military strategies. Only if Saudi Arabia and Iran make peace with each other it will checkmate the US and Israeli strategy in the middle-east.

Pakistan is at the center of this chess board game called “the 5th generation warfare”. Pakistan since the beginning knew the fact that her enemies are using asymmetric and decentralized warfare to denuclearize Pakistan; this is the only reason behind Pakistan’s successful campaign against terrorism. Pakistan’s policy of not sending its army to Yemen is a checkmate to the US in the bullet chess.

The modern warfare from Pro-Israel US is systematically sustained on the so-called Sunni-Shia divide, however at the ground level all Sunni and Shia lives peacefully with each other. At the state level, propaganda is being carried on by funding and arming both the Sunni and Shia militants against the current established Muslim states.

At the International level keeping permanent divide in between Iran and Saudi Arabia (two centers of different Islamic ideologies) is part of their grand strategy. Also, maintaining apparent peace with the Sunni world and keeping Shia Iran as a permanent threat is part of Israel’s deceptive Diplo-military strategy.

If Pakistan plays a role of mediator and brings peace in between Iran and Saudi Arabia it will cut the roots of their strategy. A brave Prime Minister like Imran Khan and a determined military leadership sitting in Islamabad is all that we need right now to use Yemen crisis as the best opportunity to bring Iran and Saudi Arabia on the table.

Previous articleTrump’s ‘Deal of the Century’ is an ‘Israel Lobby’s Master Plan’ against the Muslim World – Part II
Next articleChina, US showdown looms on trade at fractious G20

21 September 2021
Previous articleTrump’s ‘Deal of the Century’ is an ‘Israel Lobby’s Master Plan’ against the Muslim World – Part II
Next articleChina, US showdown looms on trade at fractious G20

In the Name of Peace: US-Israel Peace Plan

Trump presidency is like a rudderless ship after Bannon’s exit