Operation Blue Star: When Sikhs were massacred by the Indian Army 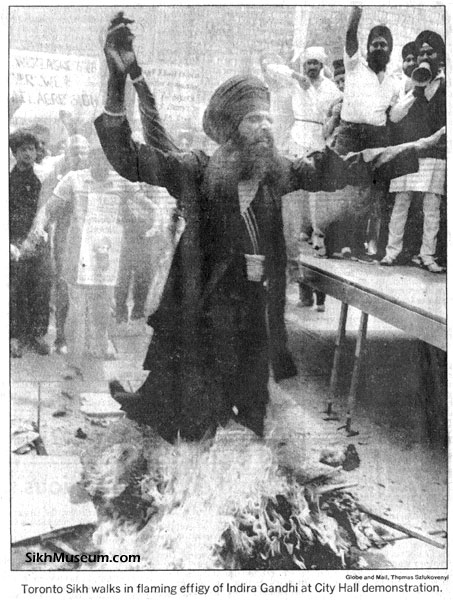 Operation Blue Star was an Indian Army operation launched between 1st and 6th June 1984. The aim of this operation, ostensibly, was to remove the Sikh firebrand leader Jarnail Singh Bhindranwala and his armed followers from the Harmandir Sahib complex in Amritsar, East Punjab.

Grievances of the Sikhs

Sikh religion originated in the Punjab at the end of the 15th Century. It is an egalitarian religion which evolved as a reaction to the caste-ridden Hindu society. The fundamental tenets of Sikhism include belief in one God, equality of humankind, social justice, and service to the people. Opinion is divided whether Sikhism is a reformed and restructured shape of Hinduism or a separate religion in its own right.

When the Indian Constitution was produced in 1950, it failed to deliver any safeguards or political rights for the Sikhs as a people or nation.

Throughout their history, the Sikhs have remained fiercely independent. This is evident from their struggle against the Mughal Empire and the Afghan invaders. During the struggle for freedom from the British Raj, the Sikhs were swayed by the Congress leaders. Mahatma Gandhi and Nehru gave the Sikhs assurances that after India achieves political freedom, no Constitution shall be framed by the majority community unless it is freely acceptable to the Sikhs.

This promise was repeated throughout the period up to independence. After independence, the same Nehru who had promised, “I see nothing wrong in an area set up in the north of India wherein the Sikhs can also experience the glow of freedom”, reverted to his true colors and said, ”The circumstances have now changed”.

When the Indian Constitution was produced in 1950, it failed to deliver any safeguards or political rights for the Sikhs as a people or nation. The Sikhs, therefore, refused to sign the Constitution and have never accepted it. Article 25 of the Constitution even denies Sikhism, the fifth largest faith in the world, separate recognition as a religion, an affront that is widely seen as a deliberate act of suppression of the Sikhs.

After independence, we hear constant echoes of the Sikh resentment against ham-handedness by the majority Hindu rule. After Indira Gandhi became India’s prime minister, a new era of Byzantine politics and Machiavellian intrigues was let loose in the Indian Punjab. Nothing portrays it more clearly than the creation of the Punjabi Suba. As a result of their ten-year-long struggle (1956-66), the Sikhs finally got their own province in 1966.

In the early hours of 5th June, Indian Army moved in, thus trapping thousands of innocent men, women, and children in the Temple.

In this moth-eaten province, Chandigarh, the capital, became a Union Territory and the head-works and hydroelectric power stations were also taken over by the central government. To perpetuate her rule, Indira Gandhi resorted to a long series of divide-and-rule maneuvers throughout India. In Punjab, the politics of the Congress (I) was aimed at weakening the Akalis. With this aim in mind, she encouraged Bhindranwale and his ultra-orthodox intolerant followers. With Indira’s blessings, Bhindranwale openly attacked his opponents, the Nirankaris. Their leader, Baba Gurbachan Singh, was shot dead in Delhi on 25th April 1980. The smoking gun pointed towards Bhindranwale. Organized political murders were now appearing on the scene. Indira Gandhi, though, had taken no action against Bhindranwale after the murder of Baba Gurbachan Singh.

The Demand for Khalistan and the attack on the Golden Temple

In March/April 1981, on the day of Baisakhi, extremists of the Dal Khalsa, the outfit headed by Bhindranwale, openly demanded Khalistan. Three months after the demand for Khalistan was made, Bhindranwale took shelter in the Golden Temple. It was the duty of the Punjab government to arrest Bhindranwale. After dictating his terms, Bhindranwale finally surrendered himself on 19th September 1981. Within days, he was released on Indira’s orders, without any bail or bond. Bhindranwale had now become a public hero. By Indira Gandhi’s blessings, he was above the law. The gory game continued.

On 2nd April 1984, some 40 minor railway stations in Punjab were blown up. On 9th May, Giani Pratap Singh, aged 85, former head priest of the Akal Takht was shot dead in Amritsar. Bhindranwale’s goose was being slowly cooked by Indira. She had allowed the situation to drag on for so long. It suited her election chances. It also created an impression that there was a serious crisis. Indira Gandhi was very clever indeed in manipulating the situation to her own advantage.

Many prominent Sikh leaders, writers, and theologians who had been honored by the Indian government returned their medals and certificates.

Between 30th May and 2nd June 1984, there was a massive buildup of the army in Punjab. On 2nd June, Punjab was completely cut off from the rest of India. In the early hours of 5th June, Indian Army moved in, thus trapping thousands of innocent men, women, and children in the Temple. What followed is too horrible to describe. It was a naked demonstration of brute force. The operation was carried out by Indian Army troops with tanks, artillery, helicopters, armored vehicles and tear gas. Casualty figures of Operation Blue Star given by Kuldip Singh Brar, the general who had commanded the operation, put the number of deaths among the Indian army at 83 dead, and 249 injured. According to the official estimate presented by the Indian government, 493 militants, including Bhindranwale and civilians were killed, though numbers put forward by independent human rights organizations are significantly higher. Whereas Indian Army employed tanks, the militants holed up in the Temple had no tanks. They had some light machine guns, 303 rifles, one rusty bazooka (vintage anti-tank weapon), and some grenades.

Read more: Dalits asked to ‘get cleaned’ before meeting the UP Chief Minister

To make the matters worse, Indian Army simultaneously attacked forty other historical Gurdwaras all over Punjab. About 5000 soldiers of the Sikh Regiment as well as other institutions, rebelled against the Government of India. Many prominent Sikh leaders, writers, and theologians who had been honored by the Indian government returned their medals and certificates.

This attack only fuelled the Sikh secessionist movement and, overnight, Bhindranwale became a folk hero. It was obvious that, sooner or later, Indira Gandhi would pay for her affront against the Sikh nation. In November of the same year, two devoted Sikhs named Beant Singh and Satwant Singh, who were posted by the Delhi police as Indira’s bodyguards, killed her. Then riots against the Sikhs broke out in Delhi, Kanpur and other cities all over India in which more than 15,000 Sikhs were murdered by the Hindu mobs while the police watched. All this when India had a Sikh president.

India is due to choose ICJ Judge nominee soon: Is this important?

India: Women win right to enter the sacred parts of temples and mosques