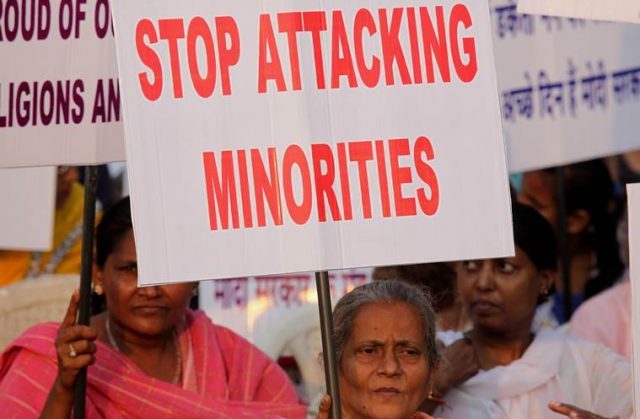 India’s diversity and traditional ethos of tolerance has been marred by hostility and hate along caste and religious lines. Millions of Dalit or “lower” castes, Adivasis (the indigenous tribal people), Muslims, Christians and Sikhs have suffered centuries of systemic repression, exclusion and stigma at the hands of “upper” castes and extremists. In 2016, a global index of human rights and social and religious freedoms by Pew Research Center placed India among the worst 10 of the world’s 198 countries when judged for “social hostilities.”

The situation of religious minorities in India has seen a steady decline during much of independent India’s history, on account of their cynical manipulation by various political parties, as well as the onslaught of a hateful and divisive ideology that has sought to impose Hindu political and cultural hegemony. The victory of the Bharatiya Janata Party (BJP) in India’s national elections in May 2014 brought to power a party that has openly espoused Hindutva, an ultranationalist ideology marked by extreme hostility towards Muslims, Christians and other religious minorities.

The BJP’s nationalist agenda is rooted in the principles of Hindutva, which the United States Commission on International Religious Freedom (USCIRF) describes as an ideology that “seeks to make India a Hindu state based on Hinduism and Hindu values.”

The result, over the last three years of BJP, can only be termed as an assault on human rights and religious freedom of minorities that is shocking both in its intensity and its brazenness. Several Indian states enforce anti-conversion laws that mandate investigations into conversions out of Hinduism.

The culture of impunity that has taken hold in India bodes ill for the rule of law and for India’s continued dominance on the world stage.

These laws are only concerned about conversions away from Hinduism and create a hostile and violent environment for religious minority communities because they do not require any evidence to support accusations of wrongdoing. In practice, these laws have had violent consequences. In July 2016, for example, a Pentecostal minister was abducted and beaten — and authorities arrested the minister “on the basis of the state’s anti-conversion law.”

Cases of attempted forced conversion to Hinduism have also come to light. In the spring of 2016, “six Gondi tribal Christian families fled the village of Katodi after their Hindu neighbors attacked and threatened them in order to forcibly convert them to Hinduism,” according to the USCIRF. A few months prior, the Rashtriya Swayamsevak Sangh (RSS), a radical Hindu nationalist group with close ties to the BJP, “reportedly placed signs in train stations throughout India that said Christians had to leave India or convert to Hinduism or they will be killed by 2021.”

In 2016, a global index of human rights and social and religious freedoms by Pew Research Center placed India among the worst 10 of the world’s 198 countries when judged for “social hostilities.”

While multiple international bodies have called out the RSS and its affiliates for their violence and extremism, Hindutva’s stranglehold on Indian polity continues to tighten. The culture of impunity that has taken hold in India bodes ill for the rule of law and for India’s continued dominance on the world stage.

These violations were most frequent and severe in 10 of India’s 29 states. National and state laws that restrict religious conversion, cow slaughter, and the foreign funding of nongovernmental organizations (NGOs) and a constitutional provision deeming Sikhs, Buddhists, and Jains to be Hindus helped create the conditions enabling these violations.

The views expressed in this article are authors own and do not necessarily reflect the editorial policy of Global Village Space.

Sexpionage against accountability in Pakistan

Is 5G technology dangerous for our health?

Theresa May to meet EU leaders in bid to rescue deal