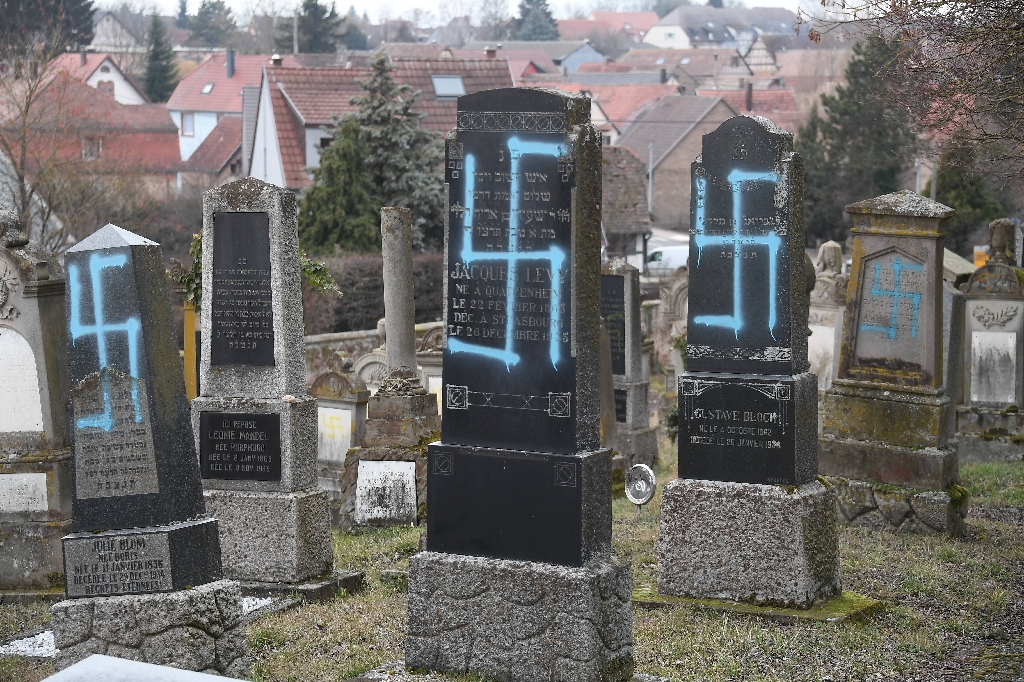 A surge in anti-Semitic violence and hate speech has prompted soul-searching for many in France, which has long wrestled with its history of discrimination and prejudice against Jews. “Anti-Semitism has very deep roots in French society,” Prime Minister Edouard Philippe said this month after a prominent writer was accosted in the street and warned that “France belongs to us.”

The number of anti-Jewish offences reported to police rose to 541 last year from 311 in 2017, after falling for two years. Dozens of Jewish cemeteries have been desecrated, and swastikas have been found scrawled on the doors of people’s homes. One elderly Holocaust survivor was even murdered in a grisly attack thought to be motivated in part by anti-Semitism.

The problem goes back centuries in a country with a long history of anti-Semitism, at times endorsed by the state.

France, home to Europe’s biggest Jewish community, hopes that curbing incendiary hate speech online and an increased focus on anti-racism education will help cut down on the vandalism and threats. But the problem goes back centuries in a country with a long history of anti-Semitism, at times endorsed by the state.

In the 13th Century in largely Catholic Medieval France, Louis IX issued a decree forcing Jews to wear the “rouelle”, a piece of yellow cloth hung on their coats to mark them as outsiders. Sovereign authorised attacks on the Jewish faith became more prominent under Philip IV who, in 1306, seized the property of Jews and expelled them from the country unless they converted.

Almost 90 years later Charles VI announced a ban on all Jews living in his kingdom. The constant harassment and scapegoating of the Jewish population was about money, according to historian Marie-Anne Matard-Bonucci.

One elderly Holocaust survivor was even murdered in a grisly attack thought to be motivated in part by anti-Semitism.

“When they (Kings) needed money” they would use “any pretext” to chase out Jews and confiscate their property, she said. The anti-Semitic abuse and violence against Jews was not isolated to France, with Jewish communities across Europe blamed for everything from the Black Death epidemics to accusations of blood libel, the supposed drinking of Christian children’s blood.

Much of the hatred stemmed from Jews being employed in occupations considered socially inferior, such as rent collection and money lending. Catholic doctrine at the time forbade Christians from lending money for interest as it was “sinful”, leading to Jews to work in financial businesses and the characterisation of the “Jewish banker” — centuries later symbolised by families such as the Rothschilds.

Fast forward a few centuries and within two years of the French Revolution, in 1791, France became the first country in modern Europe to emancipate the Jews — granting them equal rights under the law.

“The revolutionary period was a period of questioning the elites of the former regime and the powers of the Church. All the supporters of the old regime and the most conservative Catholics blamed the Jews,” said Matard-Bonucci.

The constant harassment and scapegoating of the Jewish population was about money, according to historian Marie-Anne Matard-Bonucci.

In this period, she says, the term Judeo-Masonic was born — an alleged secret coalition between Jews and Freemasons. “Since Jews benefited from the Revolution, we soon saw them being blamed for it, with people imagining they were connected to secret societies,” said Matard-Bonucci.

Read more: Children of Nazis and their victims share family history to mark…

In more recent history, the Alfred Dreyfus affair became an infamous example of anti-Semitism in France, revealing deep splits in society at the end of the 19th century. The decade-long scandal — which rocked the assumption that Jews had become an integral part of French life — revealed the depths of anti-Jewish sentiment in the country and triggered a national crisis.

Encouraged by a virulent anti-Semitic press, Captain Alfred Dreyfus, who was Jewish, was convicted of treason in 1894 on trumped-up spying charges. Despite the lack of evidence, he was sentenced to life imprisonment at the infamous Devil’s Island penal colony in French Guiana and publicly stripped of his rank.

For 12 years, Dreyfus fought to expose the anti-Semitic plot that led to his conviction. In 1898 the writer Emile Zola published his famous “J’accuse” letter to the president of the day, naming officials who had framed Dreyfus.

All the supporters of the old regime and the most conservative Catholics blamed the Jews,” said Matard-Bonucci.

The army captain was later brought back for a second trial, officially pardoned and eventually exonerated. He was reinstated with the rank of major and awarded the Legion of Honour, one of France’s most prestigious distinctions.

For some Jews in France the Dreyfus affair eventually represented a triumph of republican values over discrimination but others saw the scandal as proof of endemic anti-Semitism. “Anti-Semitism had to wait for the Dreyfus case to be partially eradicated on the left,” said Matard-Bonucci.

“Even if it never completely disappeared”.

During World War II, the French Vichy government collaborated with Germany, notably in the deportation of Jews to death camps. With northern France occupied by the Nazis, Marshal Philippe Petain led so-called Vichy France in the centre and south of the country, with its headquarters in the eponymous spa city.

Despite having autonomy from German policies, Petain passed legislation that saw Jews — around 150,000 of whom had fled to southern France believing it to be safer — subjected to severe discrimination similar to that in the Nazi-occupied north.

Under Petain, the Vichy regime put to death up to 15,000 people and helped deport nearly 80,000 Jews. After the war Petain was convicted of treason and condemned to death but General Charles de Gaulle commuted his sentence to life in prison.

The period is another stain in French history with tragic repercussions although Jews who survived also thanked French citizens who helped them during the war.

Why Photos of the Eiffel Tower at Night are Illegal

Teacher beheaded in France: What we know