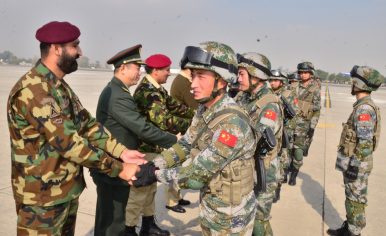 China-Pakistan defense cooperation would play a fundamental role to maintain regional and international peace and security. Ren Guoqiang, spokesperson for the Chinese Ministry of National Defense, said, “China and Pakistan share an all-weather partnership. We have maintained a very high level of defense and military exchange and cooperation”, he on March 29, 2018.

China-Pakistan bilateral relations remained uninterrupted since 1949 when China came into being. The time-tested friends, China and Pakistan, have turned their friendship into a strong strategic partnership in almost all sectors: economic, trade, defense, technology, environment, security, and counter-terrorism.

In the contemporary geopolitical environment of South Asia, it may be the Indo-US growing tie, a contributory factor in bringing China and Pakistan closer to each other.

Pakistan and China would co-produce ballistic missiles, in an apparent response to India’s development of the nuclear-capable Agni V missile. Its range is of over 5,000 km covering whole of China. China-Pakistan mutual military ventures stands for a strategic balance in South Asia. Apart from the US, India is also engaging itself with many countries and signing defense deals.  The most recent development is France-India defense deal which has been signed on March 9, 2018.

It has brought an unprecedented achievement for India. Macron and Modi announced to start work by the end of 2018 on the world’s largest nuclear power plant at the site in Jaitapur in India. Moreover, India had signed a tripartite agreement for the first time with Russia and Bangladesh for civil nuclear cooperation on March 1, 2018. Nuclear Power Cooperation of India Limited (NPCIL) is intended to play an active role for the construction of a nuclear power plant with the proposed supply of equipment, being built by Russia in Bangladesh.

These developments indicate that India is working on its military muscles. Therefore, Pakistan and China need each other in order to counterbalance India’s growing influence in the region.

China has committed to sell 8 submarines to Pakistan in coming years.

It is pertinent to discuss here that both China and Pakistan are also enhancing their defense cooperation to secure their joint development project, China-Pakistan Economic Corridor (CPEC). China has invested more than $62 billion in this project, perhaps, chasing its own objectives. China will get an access to the Indian Ocean through the development of Gwadar Port under CPEC project. This is a big concern for India.

To secure CPEC, Pakistan Navy has unveiled a special ‘Task Force (TF)-88’ commissioned for the protection of Gwadar deep-sea port. It is comprised of warships, attack helicopters, unmanned aerial vehicles and other surveillance assets. Pakistan has also established a ‘Special Security Division’ which includes 20,000 personnel for security along the land route of the CPEC.

The Pakistan Navy has also raised a Coastal Security and Harbour Defence Force for tackling threats along the coast and stationed a Force Protection Battalion at Gwadar for protection of Chinese workers. The establishment of TF-88 and associated security apparatus as well as the conference mark the intensifying China-Pakistan maritime and naval cooperation during the calendar year 2016. Simultaneously, China has committed to sell 8 submarines to Pakistan in coming years.

The joint developments of China and Pakistan are sending a signal to India that if it attacks either of them, both will be supporting each other. The amalgamation of the military might of both countries will secure the economic corridor as well as the whole region. China has already warned to safeguard the South China Sea from any invading threats. Lastly, Colonel Guoqiang also expressed his confidence that China-Pakistan military exchange and cooperation will help facilitate state-to-state cooperation between the two countries.