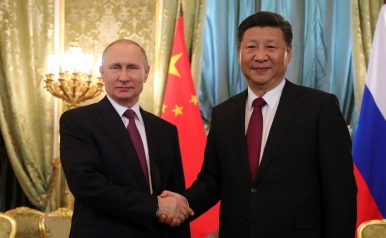 On September 17, 2018, Pakistan’s Chief of Army Staff (COAS) General Qamar Javed Bajwa commenced his three-day official visit to China. The visit of General Bajwa to China was his first official visit to the friendly country after the new government of Prime Minister Imran Khan assumed charge in August 2018.

The timing of the visit, however, made it a hot topic for political pundits, security analysts, and media outlets all over the world, where, as per the expectation, the news was blown out of proportion. It is important to note that the visit of the Pakistani COAS was scheduled as a routine visit that is part of the bilateral cooperation between Pakistan and China since the onset of their bilateral relations.

The Chinese President stated that those who oppose the BRI (Belt and Road Initiative)/CPEC shall never succeed as BRI and CPEC are initiatives of peace and development which will ensure the progress of this region and beyond.

Before the announcement of General Bajwa’s visit to China, the Chinese Foreign Minister Wang Yi concluded a successful visit to Pakistan on September 07, 2018, in which he appreciated the support for China-Pakistan Economic Corridor (CPEC) and the security arrangements that had been put in place by the Pakistani military. Furthermore, a week before the Pakistani Army Chief’s departure to China, he was called upon by China’s ambassador to Pakistan Yao Jing to discuss matters of mutual interest and regional security.

Nothing was out of the ordinary in this regard except for some controversial remarks that were allegedly made by Advisor to Prime Minister on Commerce, Textile, Industries and Investment Abdul Razzaq Dawood regarding the projects under CPEC during an interview with The Financial Times. Later, Mr. Dawood clarified that his comments were “taken out of context”.

Read more: Gen. Bajwa in China to assure Chinese investor about the future…

But, since this media hoo-hah preceded the routine official visit of the Pakistani Army chief to China, all sorts of negative connotations and conspiracy theories were attached and constructed to the visit by people who run their “shops” on propagating anti-Pakistan and anti-China propaganda.

The Indian and the western media were the first ones to give their exaggerated two cents on the interview published by The Financial Times. It was only a matter of time before a segment of the print and electronic media in Pakistan followed suit.

General Bajwa’s official visit to China was being termed as a gesture of appeasement to the Chinese which was part of a fire-fighting strategy to a situation “which had resulted in a major thaw in the Pakistan-China bilateral relationship” after the ‘alleged’ controversial remarks by Mr. Dawood.

President Xi was of the view that the two armies should deepen exchanges at all levels and cooperation in various areas and provide reliable security guarantees for common interests and development of both countries.

Analysis and media reports from different parts of the world were (and still are) giving the impression that the new government in Pakistan is not willing to cooperate with China on the CPEC project and does not see eye-to-eye with China as the previous governments in Pakistan did.

Furthermore, it was also being stated that given Pakistan’s adverse economic situation and current government’s reluctance to go to the International Monetary Fund (IMF) for financial assistance, the visit of Pakistan’s COAS to China was to the end of securing a financial package from China in the face of US opposition to service loans pertaining to CPEC.

All the assumptions and propaganda –about this visit to turn it into something which it was not– went up in smoke when the visit concluded successfully on September 19, 2018. During his three-day visit, General Bajwa held key meetings with top Chinese officials of the government and Chinese military. Most importantly, General Bajwa had a detailed meeting and discussion with Chinese President Xi Jinping, the highest possible Chinese leadership, during which President Xi made some key policy statements.

The Chinese President stated that those who oppose the BRI (Belt and Road Initiative)/CPEC shall never succeed as BRI and CPEC are initiatives of peace and development which will ensure the progress of this region and beyond. He reiterated that China places a “high premium” on its bilateral relations with Pakistan and is sure that the key economic project of CPEC will succeed.

The Chinese President voiced his confidence on the existing mechanism of cooperation and collaboration that exist between Pakistan and China and stated that as long as high-degree mutual trust and concrete measures are in place, the CPEC project will succeed and reap benefits for the people of the two countries.

China appreciated everything that Pakistan is doing to ensure the success of CPEC and highly appreciated the complementary role of the Pakistani military in this regard.

He further stated that both the Pakistani and Chinese armies should resolutely crack down on the terrorist forces to eliminate the menace of terrorism. President Xi was of the view that the two armies should deepen exchanges at all levels and cooperation in various areas and provide reliable security guarantees for common interests and development of both countries.

General Zhang Youxia, Vice Chairman of China’s Central Military Commission, during his meeting with General Qamar Javed Bajwa went on to say that, “Pakistan Army is the backbone of the Pak-China relationship”. He expressed that China greatly values its relationship and cooperation with Pakistan and hopes to further expand this cooperation. Matters of future military cooperation, counter-terrorism, arms, and equipment technology, and training were also discussed during the meeting.

General Bajwa during his meeting with President Xi also made some key policy statements as well. He stated that Pakistan clearly understands the significance of peace and stability in the region and to achieve this goal, it has made huge sacrifices which the world should acknowledge and appreciate. He also reiterated that BRI with CPEC as its flagship project is destined to succeed despite all odds and propaganda and to this end, the Pakistan Army will ensure the security of CPEC at all costs.

Furthermore, General Bajwa also cleared the air for everyone by stating that no ill will existed between Pakistan and China and that the relationship is stronger than ever which enjoys overwhelming mutual trust and respect.

The official visit of General Bajwa to China and the following events after that, such as the historic agreement between China’s National Narcotics Control Committee (NNCC) and Pakistan’s Anti-Narcotics Force (ANF) on September 18, 2018 to curb narco-trafficking, is a manifestation that there is no thaw in the Pak-China bilateral relations as was being advocated by anti-Pakistan, anti-China and anti-BRI/CPEC elements.

Matters of future military cooperation, counter-terrorism, arms, and equipment technology, and training were also discussed during the meeting.

In all the meetings during General Bajwa’s visit to China, both sides resolved to strengthen the relations and continue the progress of CPEC. China appreciated everything that Pakistan is doing to ensure the success of CPEC and highly appreciated the complementary role of the Pakistani military in this regard. Both sides expressed deep trust and respect vis-à-vis each other.

The statements issued by the officials from both sides should be a reason enough for all the rumors, misperceptions and misreporting initiated by adversaries antagonists during the last few weeks should come to an end now.

Read more: What will Pakistan achieve from PM Khan’s visit to China?

Given that this visit of Pakistani COAS to China was not an easy pill to swallow, especially for the Indians (example of which was the abrupt cancellation of Foreign Ministers meet on the sidelines of the UNGA meeting), elements both at home and abroad who are trying to create a wedge between Pakistan and China over CPEC should stop with such maneuvers as their nefarious designs will never materialize, not because their plans are not good enough, but because of the fact that Pakistan-China relations have seen it all before and know better.

Mr. Muhammad Taimur Khan is a freelance journalist. He holds an M. Phil Degree in International Relations from  National Defence University, Islamabad. He wrote many research articles, Policy Briefs, Issue Briefs, Book Reviews and Monographs on topics related to International Relations. The views expressed in this article are author’s own and do not necessarily reflect the editorial policy of Global Village Space.

Huawei executive accuses US of misleading Canada in extradition case