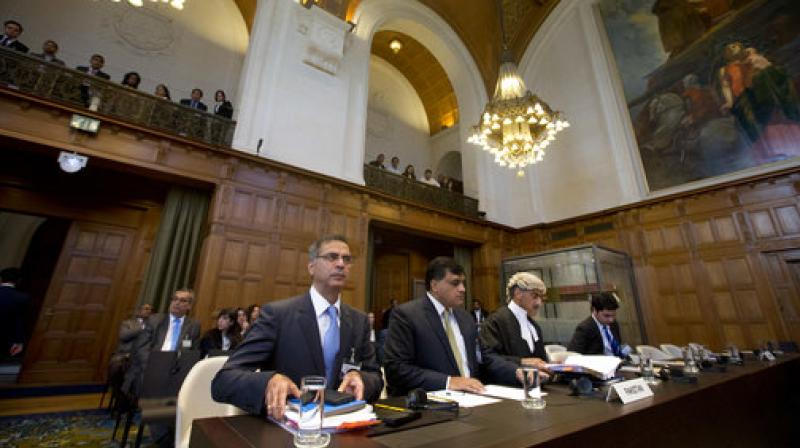 Pakistan and India faced off in the International Court of Justice on Monday. Representatives from both countries presented their arguments to the ICJ.

Pakistan’s counsel told the top international court that Jadhav, an Indian national, was arrested on Pakistani soil and had confessed to having been sent by Delhi to “wage terror” on innocent civilians and its infrastructure.

Mohammad Faisal, from the foreign affairs ministry, said the ICJ tribunal had been shown a video of the confession which was available online “for viewers to decide for themselves whether commander Jadhav is confessing voluntarily”. Mr. Faisal also showed the ICJ an image of a passport found in Jadhav’s possession that showed his cover Muslim name, Hussein Mubarak Patel.

Read More: If Pakistan goes to the ICJ mala fide interests are at play

“India has been unable, or perhaps unwilling, to provide an explanation for this passport which is the most obvious indication of covert and illegal activity,” he said.

India, however, denied that Jadhav was a spy in its application last week and lodged a protest at the ICJ accusing Pakistan of “egregious violations of the Vienna convention”.

“India believes that the farcical nature of the proceedings and unjust trial by a Pakistan military court… has led to a serious miscarriage of justice,” said Deepak Mittal, an official at India’s external affairs ministry

India’s argument is that because the case is likely to take months or years to resolve, the ICJ must immediately order Pakistan to “take all measures necessary” to prevent Jadhav’s execution until the court has given its decision.

The court’s president already wrote to Pakistan urging it to take no action that could affect the hearing of the Indian request to prevent the death sentence.

The counsel maintained the case related to the sovereignty of Pakistan and thus did not fall under the purview of the ICJ.

To counter India’s argument, Pakistani counsel Khawar Qureshi told the court that India had concealed facts during the hearing in an attempt to secure the stay order against the death sentence awarded to Jadhav for carrying out subversive acts in Pakistan.

He said that India had failed to inform the court of the fact that Jadhav was arrested in Balochistan and that he possessed double passports and birth certificates.

He further emphasized that every country had undeniable right to punish the terrorists and the ICJ could not intervene in criminal cases.

Mr. Qureshi pointed out that Indian application for stay order was full of errors and distorted facts, besides hiding information and proofs shared with India on Jadhav’s arrest and termed the Indian claim that it was denied consular access baseless.

The counsel maintained the case related to the sovereignty of Pakistan and thus did not fall under the purview of the ICJ.

Pleading the court to reject the appeal, Khawar Qureshi argued that under the Vienna Convention, the jurisdiction of the ICJ was limited when it came to Pakistan and India.

India, on the other hand, claims that Jadhav was kidnapped from Iran, where he was carrying on business after retiring from service.

But Khawar Qureshi countered, saying that Jadhav “is a terrorist” and New Delhi’s story was “far-fetched at best”.

“India invoked the jurisdiction of this court improperly,” he said. “This court exists to ensure that states engage in peaceful resolution of disputes. This court does not exist for time-wasting and political grandstanding.”

ICJ president Ronny Abraham said the tribunal would publicly deliver its decision on whether to grant an emergency stay of execution as soon as possible.

New Delhi’s strategy so far indicates that they hope to move the ICJ to annul the death sentence of Jadhav. In addition, it also wants the ICJ to declare that the Pakistani military court had violated the Vienna Convention by imposing a death sentence on Jadhav and broke human rights laws.

Mr. Mittal insisted that Pakistan did not respond to Indian demands for information about the case, snubbing requests for documents including the charge sheet, and had also failed to provide Jadhav with consular access.

Islamabad also refused to grant a visa to Jadhav’s parents who wished to travel to Pakistan to visit their son.

Jadhav “has been denied the right to be defended by a legal counsel of his choice,” Mr. Mittal said, alleging that the video confession was taken under duress. “All that we know is what we have seen in the media in Pakistan.”

Question for discussion: Is India’s application to the ICJ justified or is it an improper use of the international forum?