Pakistan Army Chief warned against any change in the disputed status of Kashmir and said that the struggle of Kashmiris will bear fruit soon while spending Eid al-Fitr at the Kashmir border with soldiers. He asked the international community to help solve this quagmire and expressed the hope that a plebiscite will be held soon. 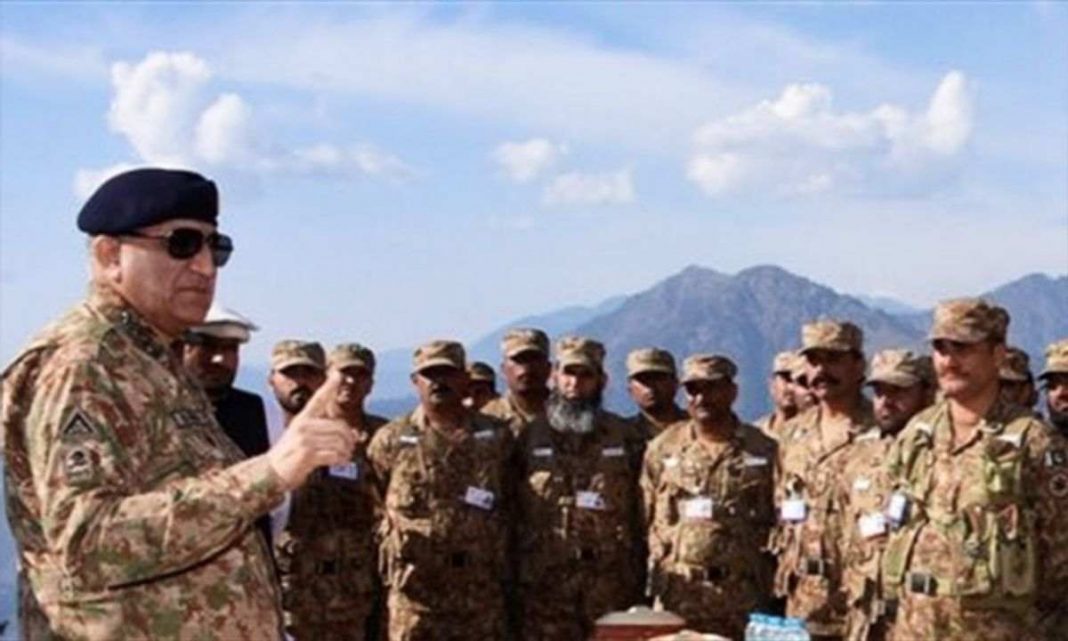 Pakistan’s Army Chief on Sunday warned that any attempt to challenge the disputed status of Indian-occupied Kashmir, including any move towards aggression, will be answered with full military might.

Bajwa, who spent Eid al-Fitr, which marks the end of the Muslim holy month of Ramadan, with frontline soldiers at the Kashmir border, lauded their “professionalism, operational preparedness, and befitting response” to alleged violations of a 2003 ceasefire agreement by Indian border force.

“Pakistan Army is observing Eid solemnly in solidarity with Kashmiris under Indian occupation particularly since the Aug. 5 illegal, inhuman lockdown, and ensuing atrocities,” he went on to say, according to a statement from the army.

India, he added, is trying to shift global attention away from “worsening humanitarian crisis and violence” in Kashmir to the Line of Control by “targeting innocent civilians.”

“Pakistan Army is fully alive to the threat spectrum, and will remain ever ready to perform its part in line with national aspirations,” he said.

Read more: How is India altering demographic dynamics in Kashmir?

He said he hoped the international community would weigh in to ensure freedom of movement for UN observers inside Indian-occupied Kashmir, as ensured by Pakistan in its controlled part of the valley, “so that the tragic consequences of ongoing atrocities and inhuman clampdown inside occupied territory is reported to the United Nations Security Council and the world at large.”

“Indian occupying forces can never suppress the valiant spirit of Kashmiris who rightfully await plebiscite under UN resolution. Regardless of the ordeal, their struggle is destined to succeed, InshaAllah [God willing],” Pakistan Army Chief concluded.

Several Indian and Chinese soldiers were injured in a high-altitude cross-border clash involving fistfights and stone-throwing at a remote but strategically important mountain pass at Ladakh near Tibet, the Indian Army said.

Modi's Article 370 stupidity is going to hurt India big! Where are those who wanted to occupy Pakistan controlled Kashmir and Aksai Chin! https://t.co/WMMK0PjWQM— Ashok Swain (@ashoswai) May 26, 2020

There have been long-running border tensions between the nuclear-armed neighbors, with a bitter war fought over India’s northeastern-most state of Arunachal Pradesh in 1962. The current tension is because of India’s bravado in quickly annexing Indian Occupied Kashmir, which has also ruffled many feathers in China.

“Aggressive behavior by the two sides resulted in minor injuries to troops. It was stone-throwing and arguments that ended in a fistfight,” Indian Army Eastern Command spokesman Mandeep Hooda told AFP.

Kashmir: A region that has seen no peace

Kashmir is held by India and Pakistan in parts but claimed by both in full. A small sliver of the region is also controlled by China.

Some Kashmiri groups in Jammu and Kashmir have been fighting against Indian rule for independence, or unification with neighboring Pakistan.

According to several human rights organizations, thousands of people have been killed and tortured in the conflict in the region since 1989.

The latest developments from Kashmir

An attack on Indian security forces in 2019 almost led to a full-scale war between the two nuclear-armed neighbors after India decided to carry out ‘surgical strikes’ for alleged ‘terrorist hideouts’ on the other side of the border. Pakistan, via its Operation Swift Retort in February 2019, gave a befitting reply to India when it penetrated deep into Indian territory and dropped bombs. A counter-attack by India was thwarted when Pakistani jets shot down two Indian aircraft and captured a pilot, leaving India red-faced.

Subsequent to it’s international humiliation, India revoked the special status granted by its Constitution to Kashmir on August 5 2019, and formally annexed the territories in subsequent months.

Since then, Pakistan and India have been locked in a diplomatic stalemate, with each side trying to undermine the other’s legitimacy on Kashmir. So far, there have been no tangible results.

While Chinese & Trump’s interests may align, Pompeo has some other plans

West’s vigorous plan to counter Chinese influence in the Pacific