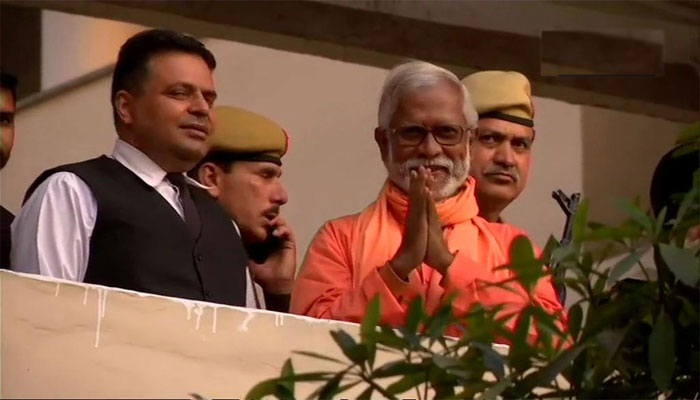 Foreign Minister Shah Mehmood Qureshi, while addressing a press conference in Islamabad on Thursday, expressed his disappointment over the Indian court’s decision to acquit the accused in the Samjhauta terror attacks.

The FM said, “Yesterday, the decision given by the Indian National Investigation Court on the Samjhauta Express terrorist attack has shocked people. The four principal accused, after 11 years, have been acquitted of all charges. Swami Aseemanand, one of the accused who is a member of [the] RSS, has publicly confessed to the crime and yet, he has been acquitted. I don’t want to be unnecessarily critical, but it is evident how India accuses Pakistan without any investigation, as seen in the Pulwama terror attack which Pakistan condemned without delay.”

The AIMIM chief Asadudin Owaisi questioned the transparency of the Indian criminal system, he said, “How long is one going to hear of acquittals due to deliberately shoddy prosecutions?”

FM Qureshi stressed that India’s narrative and its attempt to link Pulwama with Pakistan had not been accepted by the international community and upon speaking to many international leaders; he has concluded that “India has failed in connecting Pakistan to Pulwama.”

The FM noted, “They expect us to cooperate on terror investigations, 44 (Indian) lives were lost in the Pulwama terror attack, which we mourn, but my question is that 44 Pakistani lives were also lost in the Samjhauta terror attack, for which we had consistently been lodging appeals and demarches but our appeals were discarded. And today, the culprits are free.”

FM Qureshi also mentioned India’s failure to mention mosques and Muslims in its condemnation of the NZ terror attacks and inquired that India wanted a position in the OIC and it had a population of millions of Muslims, but they failed to find words while referring to their place of worship or acknowledging their religious identity.

The FM highlighted India’s hypocrisy in “downplaying” all events related to Muslims and linking them with conspiracies and terror outfits. FM Qureshi assured India of Pakistan’s and Prime Minister Imran Khan’s commitment towards investigating the Pulwama attack.

He said, “I am not trying to link Samjhauta Express with Pakistan’s commitment to investigating the Pulwama terror attack. We were committed and we are committed to helping India. We are analysing the dossier that we received, and we will present our analysis to the international community.”

The Indian opposition is “crying foul” on the verdict that allows Samjhauta terror attack perpetrators to walk away free.

India Today reports that the Congress Party and AIMIM slammed down the Indian court’s decision to acquit the principal accused in the Samjhauta terror attacks. The AIMIM chief Asadudin Owaisi questioned the transparency of the Indian criminal system, he said, “How long is one going to hear of acquittals due to deliberately shoddy prosecutions?”

The Indian opposition is “crying foul” on the verdict that allows Samjhauta terror attack perpetrators to walk away free. Farooq Abdullah, the Chairman of Jammu and Kashmir National Conference condemned the acquittal and accused the Modi-led government of protecting the culprits. He said, “The accused are related with the Modi-led government, this is why they have been released”.

On 20th March, a special court in Panchkula, Haryana, acquitted the four accused, including the Hindu-extremist mastermind Swami Aseemanand, in the Samjhauta Express terror attacks, which claimed the lives of 68 people, the majority of which were Pakistani citizens.

India Today reports that the verdict was revealed after the Indian National Investigation Agency’s special judge, Jagdeep Singh, rubbished the plea filed by a Pakistani woman, Rahila Vakeel, asking for witnesses for Pakistan to be allowed to testify in front of his court. He dismissed her petition stating that it was “devoid of any merit”.

The court’s decision on Wednesday declared that there is lack of sufficient evidence against the four accused in the Samjhauta terror attacks, which included Swami Aseemanand, Lokesh Sharma, Kamal Chauhan, and Rajinder Chaudhary, who had been charged by the Indian National Investigation Agency.

The Hindu reported that Swami Aseemanand, a former activist of the Hindu-extremist group RSS and a self-proclaimed Hindu preacher, was the mastermind behind the Samjhauta terror attacks.

While speaking to the Indian press after the hearing, Aseemanand’s lawyer, Mukesh Garg stated, “The court has said that the NIA has failed to prove any of its charges against the accused and the evidence against them was treated as not sufficient. Therefore, the court acquitted them.”

The Samjhauta Express, also known as the “Friendship Express”, was an initiative to promote harmony and relations through a train from Lahore to Delhi, however, on 18th February 2007, a brutal terror attack on the train killed 68 people, of which 42 were Pakistani passengers.

The investigation conducted by the Indian National Investigation Agency had revealed that the terrorists had carried out the blasts and the fire in two coaches carrying passengers and Indian security personnel with explosive devices and inflammable substances near Panipat, Haryana.

The Hindustan Times reported that the investigation team had discovered two suitcases loaded with unexploded bombs in other coaches of the train.

The Hindu reported that Swami Aseemanand, a former activist of the Hindu-extremist group RSS and a self-proclaimed Hindu preacher, was the mastermind behind the Samjhauta terror attacks. He is also known to have campaigned for forced conversions of Muslims and other religious minorities to Hinduism. The report further reveals that Aseemanand had confessed to being involved in bombings and terror attacks at multiple Muslim religious sites in India, including the Mecca Masjid of Hyderabad, Ajmer Sharif, and Malegaon, which he termed as acts of revenge to avenge the “terror acts of Muslims”.

In a taped interview given to The Caravan, an Indian magazine back in 2014, Swami Aseemanand revealed that these heinous terror attacks against India’s Muslim population were being ordered and organised by the “RSS top leadership”.

The strongly-worded statement of the Foreign Office states, “The acquittal of the accused today, 11 years after the heinous Samjhauta terror attacks makes a travesty of justice and exposes the sham credibility of the Indian courts.

Later, during a court investigation, Aseemanand revealed that he was pressured and “tortured” by the Indian investigation agency who intended to “put pressure on him to give wrong statements”.

On Wednesday, Pakistan Foreign Secretary Tehmina Janjua summoned the Indian High Commissioner Ajay Bisaria to lodge a “strong protest” on Pakistan’s disappointment at the acquittal of all four accused in the Samjhauta terror attacks, especially the acquittal of “Swami Aseemanand, the main perpetrator and activist of the Hindu terrorist organization RSS”.

The statement of the Foreign Ministry noted that Pakistan had “consistently raised the lack of progress and the subsequent, concerted attempts by India to exonerate the perpetrators of this heinous terrorist act in which 44 innocent Pakistanis lost their lives.”

Read more: Pulwama: An equilibrium of deterrence that fell apart

It added that Pakistan had raised the issues at the “Heart of Asia Meeting” held in 2016, alongside lodging formal demarches on the “lack of progress and acquittal of the accused in other cases”.

Foreign Secretary Tehmina Janjua labelled the decision by the Indian court as a “travesty of justice” that exposed Indian double standards and hypocrisy in accusing Pakistan of terrorism while protecting its own terrorists who had made public confessions of attacking and terrorising the Indian Muslims.

The strongly-worded statement of the Foreign Office states, “The acquittal of the accused today, 11 years after the heinous Samjhauta terror attacks makes a travesty of justice and exposes the sham credibility of the Indian courts. It also belies the rampant Indian duplicity and hypocrisy where India reflexively levels allegations of terrorism against Pakistan, while protecting with impunity, terrorists who had publicly confessed to their odious crimes.”

The Pakistani foreign secretary also noted that the Indian courts have decided to “gradually exonerate” and eventually acquit the perpetrators of this heinous attack, which is a clear and “gross reflection of India’s callous insensitivity to the plight of the 44 families of the deceased Pakistanis” along with reflecting the Indian state policy of “promoting and protecting Hindu terrorists”.

The foreign secretary urged India to “explore judicial remedies to ensure that the perpetrators are brought to justice.”

23 Miyawaki urban forests to be established in F-9 park: Zartaj