GVS reflects on how an Indo-Pak peace initiative to increase amity and friendship between the people has ironically become a symbol of lingering mistrust.

The Samjhauta Express was established on July 22, 1976, shortly after the Simla Agreement was signed between Indira Gandhi and Zulfiqar Ali Bhutto, pledging to improve relations between the two hostile neighbours. By far in the 40 years run, the railway services has united many loved ones, split into two sides of the Indian subcontinent since 1947.

A total of 14 million people migrated to either sides of the border following the Indo-Pak independence, half a million of whom were brutally slaughtered during the process. The twice-weekly romance between the two countries was carried out through the Samjhauta express facilitating 50,000 people to travel to Delhi from Lahore every year in the carriers.

Delhi train station has been a rail hub for over 150 years. The station hosts almost 800 trains every day. The structure of the station is built out of red bricks, like traditional forts in other parts of Delhi. The same way, its twin station or Pakistani counterpart, the Lahore railway station looks a lot like the Delhi station.

Today, 11 years later, the 68 who died in the attack, remain un-avenged. The Supreme Court has absolved almost all the suspects of charges, simply forgetting about the case as a whole.

Since its establishment, the train has been the preferred source of Indo-Pak travel. This is because the train cost approximately $10 up until 2006, which was much more affordable than air or bus fares. Lahore and Delhi are approximately 500 kilometers apart. The train leaves Lahore station, through the Wagah Border first stops is at Attari Station in India.

There, the passengers are put through extensive scrutiny and luggage scanning, after which a special train leaves on an 8-hour journey to Delhi. There are no stops between Attari and Delhi, so no passengers can leave or get on the train. The same goes for the way back.

The train has always had armed Indian guards in all its compartments during its duration within the Indian borders because the life of international passengers could not have been compromised in any way. The express was discontinued between 2002 and 2004 due to the Indo-Pak military crisis but resumed function on January 15, 2004 with a three-year extension of the agreement.

2004 onwards, the hostilities between Islamabad and Delhi were reduced due to constant dialogue between the foreign ministers of the countries. In November 2004, after a visit to Jammu and Kashmir, the new Indian Prime Minister, Manmohan Singh, announces that India will be reducing its deployment of troops there. 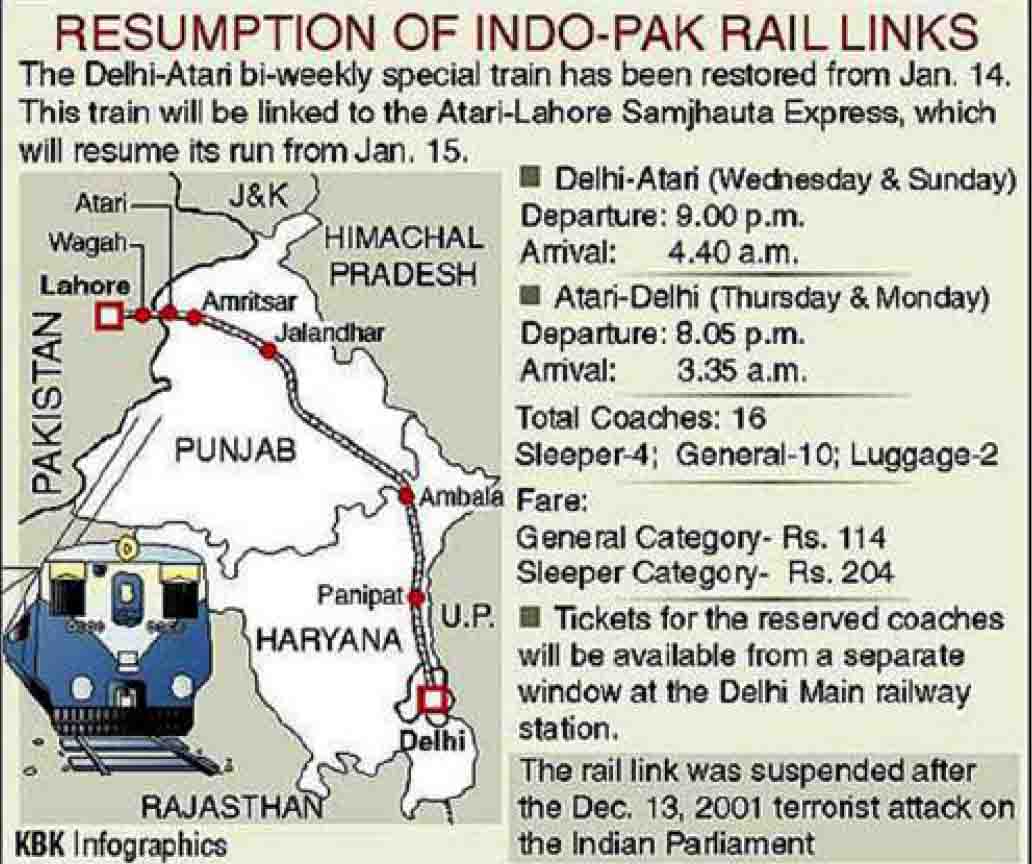 The train leaves Delhi station at approximately 11 pm, taking the visiting Pakistanis back home and Indians to visit friends and family in Pakistan. Two out of four explosive bags placed on the train explode near Panipat, claiming 68 lives and leaving over 150 injured.

The relatives waiting up on the Samjhauta Express’ arrival at Lahore station find out that many of them will never get to see their family members again. India media goes haywire with condolences and condemnations. The peace between the two countries is disrupted once again, just when things were getting better.

This is because the train cost approximately $10 up until 2006, which was much more affordable than air or bus fares.

India and Pakistan both speculated that the perpetrators intended to disrupt improving relations between the two nations since the attack came just a day before Pakistani Foreign Minister Khurshid Mahmud Kasuri was to arrive in New Delhi to resume peace talks with Indian leaders. The foreign minister was also supposed to sign a nuclear risk reduction agreement during his visit.

The ambiguity of who’s to blame for terror attacks that happened in India during 2006-2008 is constant in all cases. Be it the Samjhauta Express Attack (2007), The Mumbai terror attack (2008), Malegaon bombing (2008) or the Mecca Masjid attack, ultimately, no one was convicted.

Ajmat Ali (a Pakistani) was arrested as the first of many suspects for the Samjhauta Express attack. He was caught from the Indian side of the Indo-Pak border, trying to find a way to return back home to Lahore. Within 14 days of interrogation, he was released and sent back to Pakistan.

The foreign minister was also supposed to sign a nuclear risk reduction agreement during his visit.

Simultaneously, Sadhu Swami Aseemanand, a prominent right-wing Hindutva extremist and RSS leader openly alleged his involvement in orchestrating the Samjhauta Express attack. His statement was recorded under Section 164 of the criminal procedure code before a magistrate, in which he stuck to his statement of how Sangh activists had been actively involved in the bombing.

Aseemanad, Aka Naba and Kumar Sarkar – well known Hindutva militants further named Ramji Kaisangra and Sandeep Dange as the key instigators of the attack. During his trial, Aseemanand also stated that many of RSS activists were actively involved in planning, financing and executing Male gaon, Samjhauta Express, Ajmer tragedy and Mecca Masjid blast.

Just when the Samjhauta Express case started to make some sense to the National Investigation Agency (NIA), another arrest was made. On November 4, 2008, the Anti-Terrorism Squad arrests Lt Col Prasad Shrikant Purohit, a former army officer for the Indian Army. In several of his investigative tapes, he states “We are all on the same plane, Hindu Rashtra”.

Up until his arrest, the spotlight of the horrendous Samjhauta Terror Attack was either on Pakistan’s Intelligence (ISI) or Lashk-i-Taiba (which was also as per Ajmal Kasab’s testimony to Indian authorities the key organization involved in plotting the Mumbai attack). But the currents shifted after Purohit started to talk.

A total of 266 witnesses were examined by the trial court, out of a total of 299 witnesses in the case. Only 13 of which were Pakistanis. The case started reflecting a Saffron cloak and was a matter of minority violence. Aseemanand got his bail from the courts on September 16, 2016, due to lack of ‘circumstantial evidence’, while the witnesses kept coming to stand to testify what they knew.

Many claims that a covert interference of a Modi-led authority had a part to play in Aseemanand’s bail. Purohit in another one of his statements claimed that Gen J J Singh (former Army Chief for the Indian Army) was also ‘with us’ in the mission to establish a Hindu Rashtra, through Muslim suppression.

On January 20, 2013, Indian Home Minister Sushil Kumar Shinde spoke up about how the BJP and RSS were behind the Samjhauta Express, Mecca Masjid and Malegaon blast, but by then the 2014 Indian General Elections were already gearing up.

“One on hand we are trying to bring peace in this country. We are also taking steps against injustice to minorities as also against infiltration. But, in the midst of all this, we have got an investigation report that be it the RSS or BJP, their training camps are promoting Hindu terrorism. We are keeping a strict vigil on all this,” – Mr Shinde at the All India Congress Committee or AICC session in Jaipur. ‘Ab k baar, Modi Sarkar’, became more than just a slogan as the polls started to come in.

BJP’s win, entirely changed the dynamics of the accused in these terror incidents. Lt. Col Purohit, the prime suspect of Malegaon and Samjhauta Express blasts, was released from the Taloja prison in Navi Mumbai on Aug 23, 2017 after being granted bail by the Supreme Court.

Some also believe that the Indian army was in on the attack, to simply strengthen its anti-terrorism laws, making the Indo-Pak transit more complicated than it already was. Today, 11 years later, the 68 who died in the attack, remain un-avenged. The Supreme Court has absolved almost all the suspects of charges, simply forgetting about the case as a whole.

US-China strategic competition in the Indo-Pacific

Hope in and for Pakistan

The linkage between the US military bases and Pakistan’s prosperity