After Pakistan, Nepal has also rejected the new map issued by the Narendra Modi-led Indian government, which depicts the Nepalese region of Kalapani and the territories of Gilgit Baltistan and Indian occupied Kashmir as part of Indian Territory. 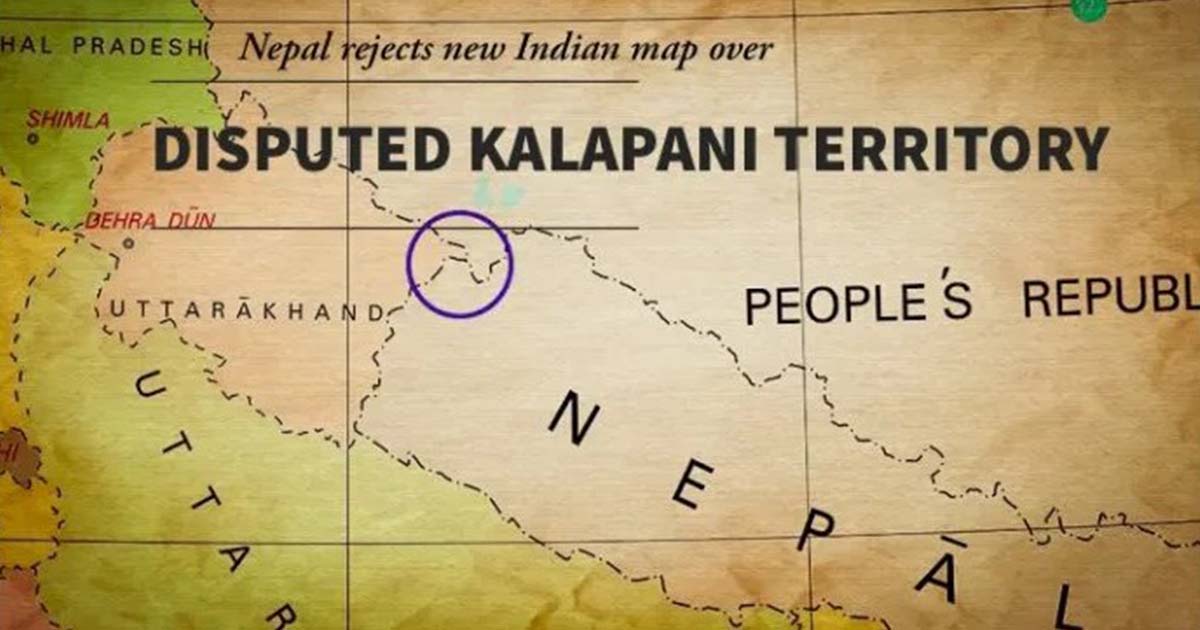 After Pakistan’s dismissal of the “legally untenable” new map released by the Narendra Modi-led Indian government, Nepal has also stepped forward to voice its objections at the placement of the disputed region of Kalapani within India’s boundaries.

Kathmandu stated that it was “clear” that the territory belongs to Nepal. On Saturday, India irked its neighbors by releasing a politically motivated map in the aftermath of its decision to bifurcate occupied Jammu & Kashmir into two administrative territories.

As per the new map released by India, India’s borders include the Kalapani region, which has been a longstanding territorial dispute between the two neighbors, mainly because New Delhi has deployed its troops in the region for over 50 years.

Nepal has rejected new Indian map over Kalapani territory disputed since the Treaty of Sugauli signed by #Nepal and British East India Company in 1816 which locates the Kali River as Nepal’s western boundary with India and makes no mention of ridgelines. https://t.co/9aWGeMvac1

A statement issued by the Nepalese foreign ministry, on Wednesday, observed that Kathmandu remains “committed to protecting its international border.”

The statement read, “Any border-related issue relating to the two friendly countries needs to be resolved through diplomatic channels on the basis of historical documents and evidence.”

It added, “The Nepal government will not accept any unilateral decision.”

As per the 1816 treaty, Nepal’s western boundary was established along the Kali River that borders India, however, the region has been subjected to longstanding disputes over the discrepancies caused by the location of the source of the river.

Rajan Bhattarai, foreign relations adviser to the Nepalese Prime Minister KP Sharma Oli said that the matter will be resolved through dialogue. He said, as cited by the international media, “We have to verify the authenticity of the map and examine the borderline from our concerned authorities and experts”

Bhattarai added, “Then we will start talks using our diplomatic channels.”

At a press meet held at the ministry, MEA Spokesperson Raveesh Kumar claimed that the Indian map has accurately depicted the sovereign territory of India. https://t.co/ydj4Zv8nI7

A statement issued by the Ministry of Foreign Affairs stated, “The political maps of India, issued by the Indian Home Ministry on 2 November 2019, displaying Jammu and Kashmir region and seeking to depict parts of Gilgit-Baltistan and Azad Jammu and Kashmir within the territorial jurisdiction of India, are incorrect, legally untenable, void and in complete violation of the relevant United Nations Security Council Resolutions.”

The statement added, “Pakistan rejects these political maps, which are incompatible with the United Nations’ maps. We reiterate that no step by India can change the “disputed” status of Jammu and Kashmir recognized by the United Nations.”

Afraid of being exposed? India refrains from joining Foreign diplomats at LOC