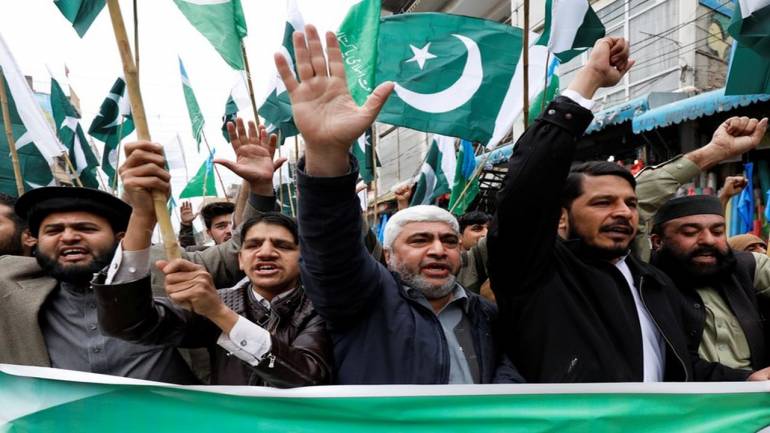 Last week, Finance Minister Asad Umar dispatched a letter to the President of the Financial Action Task Force (FATF) Marshall Billingslea, urging for the removal of India from its position as co-chair of the Asia Pacific Joint Group to make sure that the FATF process is “fair, unbiased and objective”.

The Finance Ministry released a statement outlining the contents of the letter and the case Finance Minister Umar built-up on “India’s animosity towards Pakistan”. In his letter, Asad Umar highlighted that his request is reasonable as India’s attempts to marginalize Pakistan are well-known. He also highlighted India’s “hostile attitude” while citing the “recent violation of Pakistan’s airspace and dropping of bombs inside Pakistani territory”.

Samaa TV quoted Asad Umar’s warning, “India is involved lobbying against Pakistan and it even contacted individual companies ahead of the board meeting, calling them to blacklist Pakistan immediately”.

The Finance Ministry quoted Asad Umar’s letter as saying, “The ICRG and FATF meetings must not be allowed to be used as a platform by India to make political speeches against Pakistan. The sanctity of FATF processes requires that separate assessments by individual countries for politically motivated outcomes are not allowed under the ICRG review.” He urged the FATF leadership to “appoint another country as co-chair of the Joint Group instead of India to ensure an impartial assessment of Pakistan’s progress in regard to the FATF Action Plan.”

India’s Position as FATF Co-Chair a Threat for Pakistan?

While speaking to Ayza Umar on her TV Show on Indus News, Lt. Gen. (R) Amjad Shoaib lauded Finance Minister’s initiative to inform the FATF of Pakistan’s fear. He observed, “I think Pakistan was fully justified in writing to the FATF administration to remove India because India has a declared objective, a part of their [Indian] foreign policy and they haven’t been mincing words-they have been telling very openly that they want to isolate Pakistan diplomatically, damage our economy and this is what they have been doing all along.”

But the fact is that Pakistan has brought this thing in the notice of the international community that we will not trust the judgments of the FATF if India is also included in the panel unless you remove them, we will keep expressing our doubts.”

Lt. Gen (R) Amjad Shoaib added, “In such circumstances, where a country has a declared aim, a declared objective to damage another country’s economy, and we see that this country is adopting all kinds of means available to them, including the diplomatic efforts that they are launching against Pakistan. How can you really trust this organization where you have countries like India presiding? We have expressed our fears but it is unsure whether the FATF will remove India because these organizations have their own political motives too.”

“The countries who join hands with India also have unified objectives against Pakistan, and they may try to prevail. But the fact is that Pakistan has brought this thing in the notice of the international community that we will not trust the judgments of the FATF if India is also included in the panel unless you remove them, we will keep expressing our doubts.”

Lt. Gen (R) Amjad Shoaib asserted that Pakistan’s efforts to express its fears and doubts over India’s motives against Pakistan, and since morality is not a common practice in the BJP-led India, it is important for the international community to intervene and reprimand New Delhi.

India could not answer many questions in ICJ about Kulbhushan Case