PSX witnessed another bloodbath as US has banned Europe travel over coronavirus fear. WHO had earlier warned that the spread and severity of the illness was due to "alarming levels of inaction. But EU has warned that Trump's recent restriction will adversely affect economy. Should Pakistan also issue such health advisory? 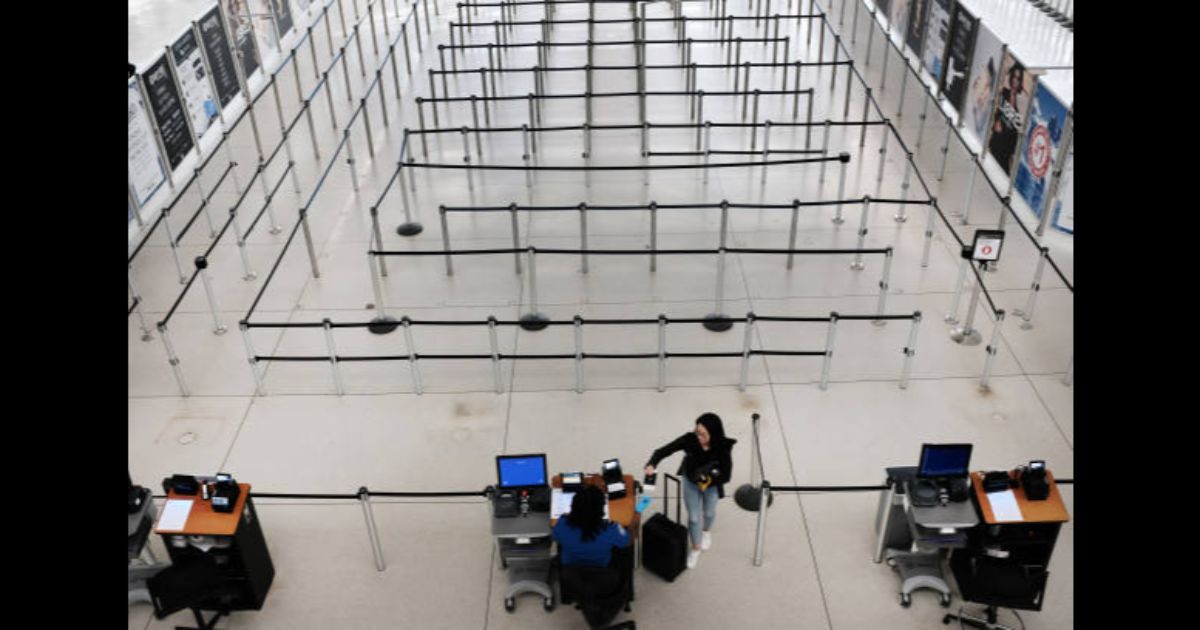 US President Donald Trump announced a shock 30-day ban on travel from mainland Europe over the spiralling coronavirus pandemic that has sparked unprecedented lockdowns, widespread panic and another financial market meltdown on Thursday.

The coronavirus and its containment measures send ripple effects through Pakistani markets. Pakistan Stock Exchange (PSX) witnessed another bloodbath as the benchmark KSE-100 index lost over 1,707 points in afternoon trading over coronavirus threat and decrease in oil prices.

Global indices were down over 5% in Europe and USA after the World Health Organisation declared the coronavirus outbreak a pandemic and the United States banned travel from Europe.

Earlier today, trading was halted just days after a similar measure was adopted during Monday’s bloodbath, when the KSE-100 saw its biggest single-day decline in over a decade.

Financial markets crashed as oil slumped after Trump placed a ban on travel from Europe to stop the virus. The decision has threatened more disruptions to trade and the world economy.

Trump’s unexpected move in a primetime TV address from the Oval Office pummelled stock markets, as traders fretted about the economic impact of the outbreak that is on a seemingly relentless march across the planet.

Equities and oil prices fell through the floor again on Thursday after Donald Trump banned all travel from Europe to the US for a month to fight the coronavirus, ramping up fears the global economy will careen into recession.

The World Health Organization also sounded another global alarm bell on Wednesday, officially classifying as a pandemic the virus that has infected more than 124,000 people with 4,500 deaths, according to an AFP tally.

“This is the most aggressive and comprehensive effort to confront a foreign virus in modern history,” Trump said, after the president had been criticised for his response so far.

Trump’s ban affects travellers from Europe — but not Britain — as the continent grapples with a burgeoning crisis.

Hardest-hit country Italy on Wednesday clocked more than 2,300 new cases over the previous 24 hours and infections in Spain jumped by a quarter to more than 2,100.

In Germany, Chancellor Angela Merkel quoted experts saying that “60-70 percent of the population will be infected if the situation” continues without a vaccine in sight.

Italy is in the grip of a lockdown never before seen in peacetime, shutting all stores except pharmacies and food shops in a move that has emptied world-famous tourist sites in Rome, Venice and Florence.

“I can’t even recognise Rome now,” 30-year-old Muscovite Yekaterina said while posing alone for a photo by the usually bustling Trevi Fountain in the heart of Rome.

People in Italy have been told to keep at least a metre (three feet) from each other and handshakes are frowned upon. Italians have found themselves starting to talk to each other a few steps apart — while often laughing about the regulations along the way.

“As soon as the emergency has passed, we will organise a free carbonara day for doctors, nurses and healthcare workers,” said a closing note by a restaurant in Rome’s popular Trastevere neighbourhood.

The EU will on Thursday assess the travel ban on Europe imposed by US President Donald Trump, European Council President Charles Michel said, adding: “Economic disruption must be avoided.”

The tweet by Michel, who coordinates action by the leaders of the EU’s 27 member states, followed an overnight decision by Trump to suspend travel from Europe — but not Britain which is no longer part of the bloc — to the US for 30 days in a bid to stop the spread of the new coronavirus.

“Europe is taking all necessary measures to contain the spread of the COVID-19 virus, limit the number of affected people and support research,” he said.

Trump’s order is to be implemented from late Friday. The White House said it would apply to non-US citizens and residents and would not be applied to goods.

According to the last count from the European Centre for Disease Prevention and Control on Wednesday, more than 17,000 cases of infection of the new virus have been recorded across Europe, more than half of them in Italy, and there have been 711 COVID-19 related deaths.

Following similar stimulus steps taken around the world, Trump announced measures aimed at shoring up the world’s top economy from the pandemic, including deferring tax payments for some individuals and businesses — a move he said amounted to $200 billion in liquidity.

But markets took fright at the announcement. Australian stocks suffered their worst one-day drop since the 2008 financial crisis, dropping 7.4 percent despite the earlier announcement of a multi-billion-dollar stimulus package in the country.

“Travel restrictions equal slower global economic activity, so if you need any more coxing to sell sell sell sell after a massively negative signal from overnight trading in US markets it just fell in your lap,” said AxiCorp’s Stephen Innes.

I’m incredibly proud of our @POTUS and what he’s done to slowdown the #CoronavirusPandemic in our country! If not for the measures he put in place, a lot more people would be infected right now or have died! https://t.co/3XE9zIxonE— Coral Haug Blanchard 🇺🇸 (@CoralBlanchard) March 12, 2020

White House officials were also forced into a clarification after Trump announced the “tremendous amount of trade and cargo” from Europe would be banned.

Washington later stressed the measures, that come into effect from “midnight Friday”, would apply only to humans, not goods or cargo.

The State Department later advised Americans to reconsider travel abroad, as Johns Hopkins University’s coronavirus tracker put the number of known US cases at around 1,300, with 36 dead.

The World Health Organization had earlier warned that the spread and severity of the illness was due to “alarming levels of inaction.”

“We have never before seen a pandemic sparked by a coronavirus,” WHO chief Tedros Adhanom Ghebreyesus said, adding that its new designation would not change the response to the outbreak.

The majority of cases have been in China, where the outbreak emerged in December.

But as the number of new infections has steadied, hotspots have emerged elsewhere, with Italy, Iran and Spain among the worst impacted.

Demonstrating that the illness can affect people from all walks of life, Hollywood superstar Tom Hanks announced Thursday that he and his wife had tested positive.

“To play things right, as is needed in the world right now, we were tested for the coronavirus, and were found to be positive,” said the 63-year-old actor, who is in Australia for a film.

Hanks and his wife went into isolation at an Australian hospital.

The pandemic also continued to disrupt cultural and sporting events around the world as authorities tried to prevent large gatherings.

England’s top-flight football league saw its first cancellation while E3 — the world’s premier video game trade show, due to be held in June in Los Angeles — was called off.

In the US, the NBA said it was suspending play starting Thursday after a Utah Jazz player tested positive.

The impacts on sporting events fuelled concerns about the fate of the 2020 Olympics in Japan that are due to start in July, but Tokyo Governor Yuriko Koike said it was “unthinkable” that the Games would be cancelled.

US reports fewer virus deaths as WHO hails global progress