Pakistan on Tuesday signed a loan agreement worth $787 million with the World Bank to revamp water supply and sewerage system in the country.

As per details, an amount of $382 million would be spent on Karachi Mobility (Yellow Line) Project. The objective of the project is to improve mobility, accessibility and safety along the yellow line Bus Rapid Transit (BRT) Corridor in Karachi. The project will help develop urban road infrastructure (Yellow Corridor), rehabilitate or reconstruct road infrastructure along the yellow corridor, and develop and operationalise a BRT system.

Likewise, an amount of $230 million would be spent on Competitive and Livable City of Karachi Project. The objective of the project is to improve the performance of Karachi local councils and agencies in urban management, financing and service delivery; and to improve the business environment for private sector development in Karachi.

The World Bank country director, while appreciating the reforms initiatives of the government, committed to extending possible support and facilitation to the government to help put the economy back on track.

Pakistan and the World Bank on Tuesday signed $787 million worth of loan agreements for improving civic services in the country’s largest city and financing a regional electricity transmission project.#ایکسٹینشن_نامنظور #ReleaseTheSnyderCut #قوم_کا_فیصلہ_ایکسٹینشن #CPEC pic.twitter.com/aipJkzRPmT

Speaking on the occasion, Economic Affairs Minister said that the signing of five projects worth $787 million indicates the World Bank’s resolve to support the development agenda of the incumbent government.

The World Bank country director, while appreciating the reforms initiatives of the government, committed to extending possible support and facilitation to the government to help put the economy back on track.

PTI’s rhetoric stands to blame previous government policies that have indebted the country. While that remains true, PTI will inevitably continue this trend of taking loans like its predecessors.

It is natural for a country to float bonds, finance infrastructure projects through long-term debt instruments, and use capital markets, both domestic and external, to meet its financing needs. Therefore, the plans agreed upon with the World Bank for sustainable development of the country stand commendable.

However, it is important for countries to follow a carefully calibrated borrowing policy that minimises the various risks associated with taking on additional debt, such as interest rate and refinancing. Therefore, policymakers need to make sure Pakistan is able to pay back or rollover these loans in the medium to long term.

Total external debt in Pakistan has increased overtime from 2008-2018 according to State Bank Annual Reports: 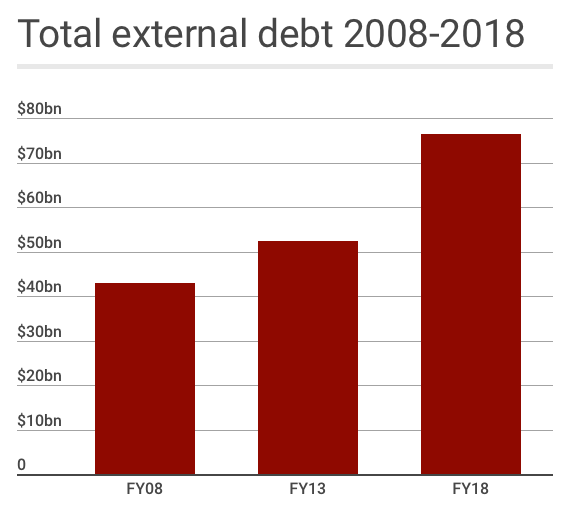 This trend is predicted to continue given the fast tracked pace of projects under the China-Pakistan Economic Corridor which takes a hit at our external debt.

While the recent trade of Treasury Bills through foreign investors paints a hopeful picture for minimizing external debt, or at least make timely repayments possible, it does not tackle the issue of domestic debt which accounts for majority of Pakistan’s debt problems. 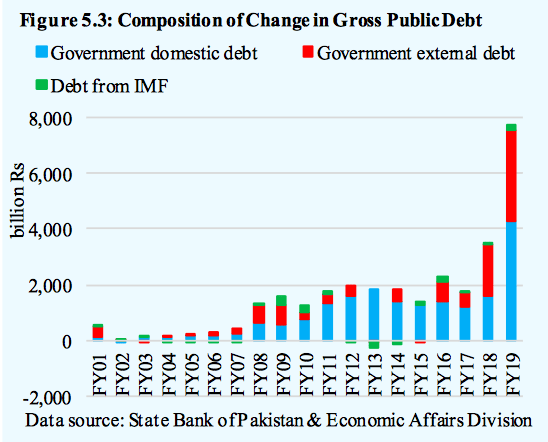 The World Bank has taken several other initiatives aimed at the development of Pakistan in 2019 such as the provision of loans worth $918 millions for higher education and KPK’s revenue mobilization programme announced in June but the government should have economically viable plans in place to avoid further exploitation at the hands of international institutes.

Power resides with whosoever has the ‘power to coerce’

Maulana’s Shrewdness Failing Him: Doors Closing Fast For Him

Future is ‘Made in Pakistan’: Chairman Board of Investment Zubair Gilani

Biden wants to extend the START nuclear treaty with Russia by...

AFP - January 22, 2021
US President Joe Biden on Thursday proposed a five-year extension with Russia of New START, days before the expiration of the last nuclear reduction...

US files charges against main culprits behind the 2002 Bali bombings

Op-ed: If you think Pakistani Anchors are abrasive, look East

US files charges against main culprits behind the 2002 Bali bombings