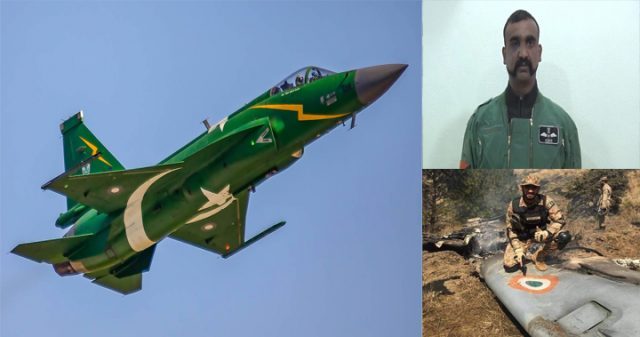 The Pakistan military’s spokesperson Major General Asif Ghafoor while speaking to Russian publication Sputnik dismissed the Indian claims that Pakistan used US-made Lockheed Martin brainchild F-16’s to hit down Indian aircraft in late February which subsequently resulted in the capture of Indian Wing Commander Abhinandan. Ghafoor reiterated that the Pakistan Aeronautical Complex’s JF-17 Thunder combat aircraft which had been developed jointly with China were used instead during the dogfight.

“The aircraft which engaged those targets and fought them were JF-17. As regard to how to use F-16, in what context [they] were used or not, because at that point of time our entire Air Force was airborne, now it remains between Pakistan and the US to see how the MoUs regarding the use of F-16 have been adhered to or otherwise,” Maj Gen Ghafoor told Sputnik.

In another impactful statement, director-general of Inter-Services Public Relations (DG ISPR) said that Pakistan is ready to take steps towards non-proliferation of nuclear arms, but only if India does the same.

Backing Pakistan’s rhetoric of the events preceding the February 28 air-to-air combat, the DG ISPR said the Indian jets violated the Pakistani airspace on February 26, dropping payloads without inflicting any casualties or damage to infrastructure.

“Pakistan is dismissing the possibility of using its nuclear weapons in the foreseeable future and sees them as more of a deterrence tool to prevent conventional warfare, said Ghafoor, noting that even though the protection of the country was of the utmost importance, it would be “insane” to discuss the use of nuclear weapons.

“Since we have gone overtly nuclear, as India also, in 1998, our stance is that this capability eliminates the possibility of conventional war between the two states. So that is to say, this is a weapon of deterrence and a political choice. No sane country having this capability would talk about using it,” he said.

“Pakistan will undertake anything which is based on equality. You cannot tie the hands of Pakistan and keep India open. Anything that happens should happen for both countries,” he stressed.

Read more: Roar of thunder: JF-17 upgrades to Block 3 as it tests…

He further informed that Islamabad was discussing the use of its JF-17 with the United States citing “friendly relations” with Washington. Pakistan, however, would use whatever it deemed necessary if it came to “legitimate self-defense,” he added.

Backing Pakistan’s rhetoric of the events preceding the February 28 air-to-air combat, the DG ISPR said the Indian jets violated the Pakistani airspace on February 26, dropping payloads without inflicting any casualties or damage to infrastructure. Pakistan then decided to retaliate but chose not to threaten civilian lives.

“Next day, our Air Force, while staying within our own airspace, took four targets in India-occupied Kashmir… Being a responsible country, we could have caused damage even to the military installations or human life… But we had to show our will, capability and resolve.

So what we did — we first chose the targets, and when the targets were locked by the aircraft, we shifted the point of impact to a safe distance where there was no infrastructure or human life, meaning thereby that we wanted to tell Indians that we had the capability to hit that military target, but in the entrust of the peace of the region we are only showing you our capability,” he said. The official added that Pakistan had the footage of the whole operation.

Previous articleTop 5 Most Popular MMORPG Games of 2021
Next articleShahbaz’s name to be removed from ECL: LHC

29 July 2021
Previous articleTop 5 Most Popular MMORPG Games of 2021
Next articleShahbaz’s name to be removed from ECL: LHC

Pakistan’s auto industry off to a spectacular start in 2018

Pakistan’s real challenge is to improve its soft power