Crash of F-16 and tragedy of the death of pilot, Wing Commander Nouman Akram, brings attention to another difficult question. Worldwide governments are cancelling large public gatherings to ensure that coronavirus does not get an opportunity to spread from close contact in congested areas. But Pakistani government remains in a mental inertia; it is offering reassurances to public and has refused to cancel large public events like PSL and the March 23 parade - clearly putting its people at risk against all scientific advice. 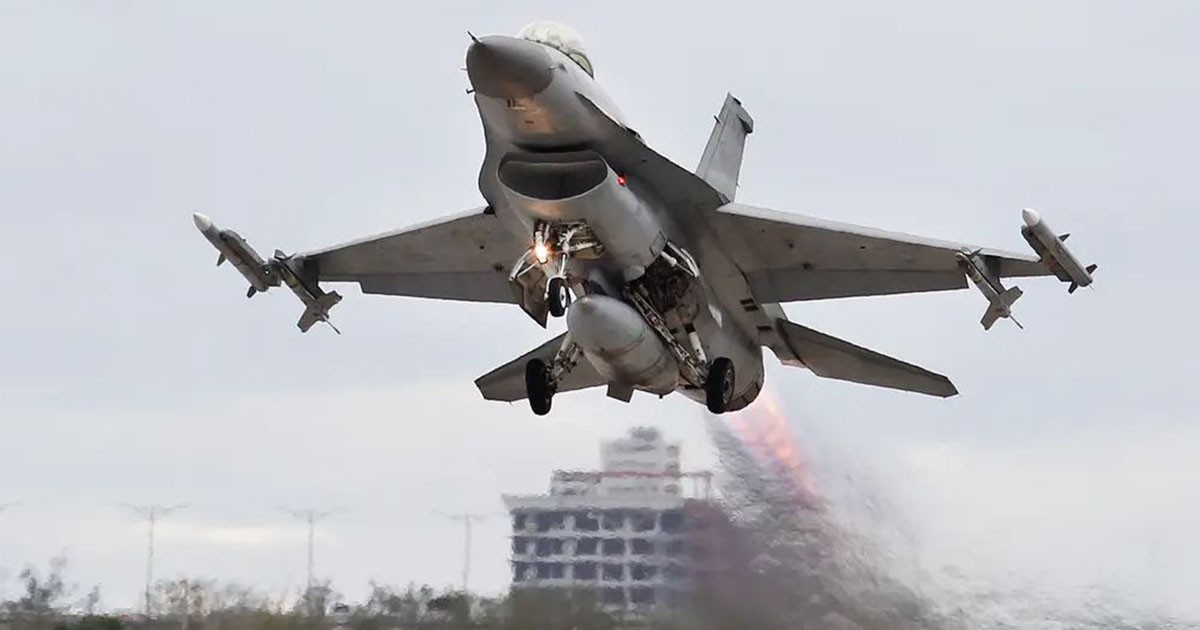 The spokesperson of Pakistan Airforce confirmed that a F-16 crashed during the rehearsals near Shakarparian in Islamabad and that pilot, Wing Commander, Nouman Akram has embraced martyrdom. He gave no further details.

Terrible news of the F 16 crash but now some news coming pilot may have ejected. So earlier news contradicted. Praying this new report of pilot ejecting is correct.

Should March 23 Parade be happening this year amidst coronavirus scare?

Seldom has a sophisticated plane like F-16 crashed in rehearsal exercises for Pakistan Day Parade killing a senior PAF pilot. In most crashes pilots get an opportunity to exit but in this incidence pilot, Wing Commander, Nouman Akram, did not get this opportunity either. But this tragedy has also raised another troubling question.

So far hundreds of people (more than 3,700 so far) have died all over the world due to the Coronavirus and so far 7 deaths have been confirmed in Pakistan. Many analysts believe these numbers to be understated and doctors in Karachi hospitals have claimed they are being told to stay quiet on the issue.

This week, Qatar Airways, clearly under instructions from Doha government, has closed entry of passengers from Pakistan into Qatar. This looks strange given the fact that diagnosed, detected and admitted cases of coronavirus in Pakistan are very small. However it appears that international institutions, like Qatar Airways, are not convinced that coronavirus cases in Pakistan are as far and few as being claimed by the Pakistani government authorities.

Globally, governments are discouraging crowd gatherings, Ireland has cancelled in St Patrick street celebrations as have many USA cities, Madonna cancelled her shows in Paris, and the Pope has stopped his open mass in Italy. There is even discussions that Japan may also delay the Olympics in the summer. UAE has closed schools for 1 month and Italy has closed them for 2 weeks. Hotels and airports across GCC countries are lying deserted. In Dubai many international organisations have asked people to work from home or go on voluntary paid leave. In Pakistan, government is somehow paying lip service to the threat of coronavirus – while ignoring the essentials of risk management and mitigation.

Pakistan has so far decided to go ahead both with the PSL and the March 23 parade without regard to the potential consequences of spreading the Coronavirus. Imran Ismail, Governor Sindh, while briefing media, on Tuesday, made that strange claim that government is trying to make the stadium sterile and safe from coronavirus. No where else in the world a senior government functionary has made such a claim. Even schools in Islamabad have cancelled school sports events and other events.

A PAF aircraft recently crashed during training on 12th February, 2020 near Takht Bhai in KP. The plane was on routine training for the event.

On February 7, 2020, another PAF Mirage aircraft, which was on a routine operational training mission, also crashed near the Lahore-Multan Motorway. However, the pilot of the crashed plane was rescued safely.

Similarly, a pilot of the Pakistan Air Force (PAF) was martyred in an air crash near Balochistan’s Mastung area in February 2019. “PAF’s F-7PG aircraft was on a routine training missing when it crashed”, the PAF said in a press release.

The Air Headquarters has constituted a board of inquiry to determine the cause. Earlier in November, PAF C-130 cargo aircraft crash landed at Nur Khan Airbase.

Pilot Nouman embraced martyrdom in F16 Crash during this March 23 rehearsal. Wing Commander Nouman Akram was awarded the coveted Sher Afgan Trophy for being the best marksman in the intra-squadron competition.

Earlier inquiries into all these crashes, according to media, have not been made public. Fighter planes keep on crashing, during exercises, world-wide. Frequency of such crashes in Pakistan is much less than in neighbouring India.

Pakistan’s quest for F16 Planes despite repeated difficulties created by the US.

Last year, February 2019, during the Balakot incidence with India, Pakistan shot down an Indian MiG-21 Bison which India claimed it did so using a F-16, against the end-user agreement terms on which Pakistan received these from the USA. Pakistan asserted that it had shot down the Indian Mig-21, using its JF-17 thunder airplane. And in any case no end-user agreement can prevent Pakistan using its F-16’s in its defence. India also claimed, without offering any evidence, that its pilots had shot down a F-16 as well. US Department of Defence officials claimed that Pakistan’s aircraft were present and accounted for making hash of Indian claims.

The F-16 has remained a very prestigious fighter aircraft in Pakistan. In 1990, Pakistan ordered around 70 F-16’s out of which it paid for 28 upfront at $23m each in 1990. The USA withheld the F16’s after the Pressler Amendment imposed sanctions on the country and Pakistan finally received these several years later after it joined the US war on terror.

The plane was originally designed in the 1970s by General Dynamics as a light-weight air-to-air fighter. Soon, it was modified with air-to-ground capabilities and this transformed the F-16 into a multi-role fighter. The fighter aircraft now has capabilities for navigation and precision attack at day and night and in all weather conditions. It has also traded its original analog flight controls for a digital system and new core avionics. Till 2018, General Dynamics has produced more than 4600 F-16 planes – each unit is made to perfection.

With a unit cost of about $18 million, the F-16 weighs over 9000 kilograms, has a wing-span of more than nine meters and can travel at speeds over Mach 2 i.e. twice the speed of sounds. Being a multi-role fighter, it can be equipped with a wide variety of weaponry such as anti-ship missiles, air-to-ground missiles, medium-range air-to-air missile, a 20 mm Vulcan cannon and more.

Moroever, Pakistan had bought a $5.1 billion Military Sales Package from the US Defense Security Cooperation Agency (DSCA) in 2006, however, the deal didn’t go through at the time due to the 2005 Earthquake, however, it is now going through with Pakistan set to get 36 F-16C/D Block 50/52 with modern APG-68(V)9 radars.

This tragedy today may raise the difficult question if a resource constrained country like Pakistan can justify using such expensive state of the art fighter aircraft for theatrics purposes for events – which increases risks for machines and trained pilots like WC. Nouman Akram who lost his life today.