While Indians mourned the death of another Bollywood celebrity within the past few months, Pakistani social media users engaged in a discourse on depression and mental health. 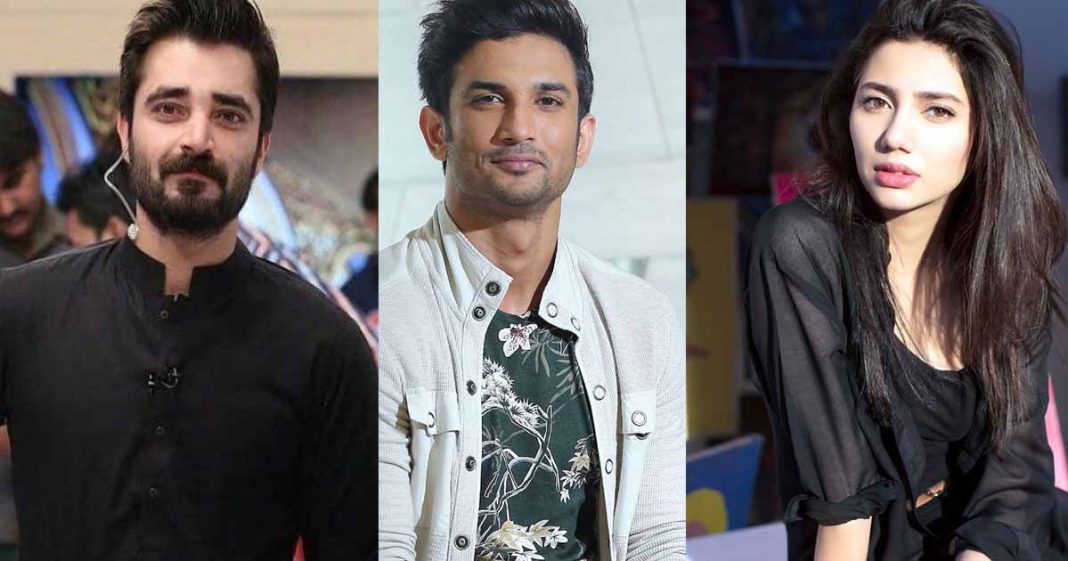 A score of Pakistani celebrities have taken up the matter of mental health and depression after the suicide of actor Sushant Singh Rajput.

While Indians mourned the death of another Bollywood celebrity within the past few months, Pakistani social media users engaged in a discourse on depression and mental health.

Celebrities including Hamza Ali Abbasi, Zara Noor Abbas, Mawra Hocane, Mahira Khan, and others shared their two cents on depression on social media. They mourned the death of Bollywood actor Sushant Singh Rajput and expressed condolence to his friends and family. They asked their followers to take care of the people in their surroundings.

Hamza Ali Abbasi urged everyone to be kind to others. He asked people to extend kindness to the weak and poor. He advised people to be honest and ensure that others are safe from their actions and words. “Give charity. Know that real life is about to start after the transition we call death. All peace comes from God,” he concluded.

Be kind to others, to ur family, to the weak, to the poor. Be just, be honest, make sure all r safe from ur actions and from ur words. Give charity. Know tht the real life is abt to start after the transition we call death. All peace comes from God.

Actor Mawra Hocane wrote, “It’s so important for all of us to be kind, to be compassionate, to be polite. We all have a role to play in each other’s lives. Let’s all have a big heart for one another. Let’s please be kind. Rest in peace, Sushant Singh Rajput.”

Pakistani model and actor Amna Ilyas took to Twitter saying, “If a person has fame and money, it doesn’t mean he is the happiest of all! One in four people in the world is affected by mental or neurological disorders at some point in their lives. Please take care of the people around you. Sushant Sing Rajput, rest in peace.”

Why have we made it cool to be ‘straight up’? That isn’t called honesty, it’s downright apathy! Be kind and proud. Wear it like a badge. Be kind. Be kind. Be kind. There is much more to people than they show. Be kind ffs.

Zara Noor Abbas explained that it’s the reaction of people that discourages those suffering – from opening up about their traumas. “People keep things to themselves, thrown by what others will interpret them as. That fear is what makes them sulk deeper into the darkness. So before you judge someone, stop and think about the inner battle they are constantly fighting.”

You keep things to yourself as you are always thrown by what people will interpret it as. That fear is what makes you sulk deep into the darkness. So just before you make a judgement about someone, STOP and think about the inner battle that they are constantly fighting.

Osman Khalid Butt, said that its brave to share one’s feelings. One must not turn away such people. Instead, they should be listened to so that they don’t take extreme steps to end their lives.

“You can help beyond the performative ‘it’ll get better’,” he said, sharing a link to a guide on how to help someone with depression.

“Someone’s depressive episode might seem ‘dramatic’ to you but that doesn’t invalidate what they’re going through.” He added the stigma forces people to fight, dismiss or suppress it on their own.

“There is also a culture of not just accepting toxicity and cynicism but actively encouraging it. As someone who has personally been affected by the apathetic and frankly dismissive attitude towards depression, if someone reaches out to you, listen!”

When someone is brave enough to talk to you about their mental health issues, their battle with depression & anxiety, 𝘭𝘪𝘴𝘵𝘦𝘯 to them. Really listen.
You can help beyond the performative 'it'll get better.'
Here's how.https://t.co/4K6xIy4sUO

Anoushey Ashraf mourned Rajput with a public service message. “Something about depression killing a person is far worse than anything else. There is a lack of understanding of mental health issues and even though some think this is an easy way out, imagine the torment in one’s mind for them to take this step. RIP, Sushant”.

Bollywood actor Sushant Singh Rajput died at the age of 34. He reportedly committed suicide at his Mumbai house.

The incident plunged the entire Bollywood fraternity into disbelief as they expressed grief and shock on the untimely demise of the rising actor Sushant Singh Rajput. Rajput hanged himself in his apartment in Mumbai.

His Bollywood peers took to Twitter to mourn his death. Sushant Singh Rajput is trending on Twitter since yesterday. But his death has also brought back under the spotlight; the subject of mental health and depression. The discussion around mental health and challenges to outstrip depression picked up on social media.

His fans discussed how fame, wealth, and success are not the ultimate solutions to happiness and contentment. Behind the glamorous and glitzy world of entertainment, a score of these entertainers suffer from discontentment. Social media users commented that the demise of Sushant Singh Rajput exposed the fact that even celebrities suffer from sadness, anxiety, and depression.

Celebrities suffering from mental health issues is not a new thing. In the past, several celebrities like Chester Branton, Indian actress Jia Singh, pop singer Goo Hara, Kate Spade, Hollywood actor Robin Williams have committed suicide. Even Deepika Padukone, a survivor of depression, became extremely vocal recently over the importance of mental health and have urged her fans to seek help immediately if they face issues.