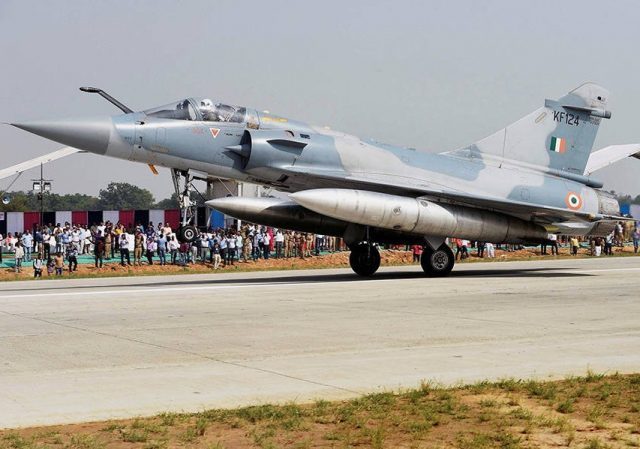 Major General Asif Ghafoor confirmed the intrusion by Indian Air Forces in the airspace of Pakistan from Muzaffarabad sector on Line of Control that was timely foiled by Pakistan Air Force. The attack happened in the wee hours of the morning between 2-4AM.

The politicians and members of all the parties irrespective of their political differences rallied on the social media and unanimously appreciated the vigilant and timely response from Pakistan Air Force. They have expressed solidarity with the Air Force Pakistan for courageously chasing off the Indian jets and confronting them on the line of Control.

The member of National Assembly, Nafisa Shah hailing from Pakistan People’s Party also condemned the war hysteria of India and demanded the government of Pakistan to give a befitting response to India.

Various politicians have reiterated that they stand united behind the armed forces in defense of Pakistan.

Senator Sherry Rehman took to social media and gave a strong message to India that it should not make any mistake since the civilian government and the military leadership of Pakistan are united in the defense of Pakistan. She also demanded the federal government of Pakistan to call up a joint parliamentary session to give a befitting response to India.

Make no mistake:in any hour of Indian aggression Pakistan unites to stand by our brave #PakForces .High time the govt woke up to its responsibilities and called a joint session of parliament to send a clear, powerful message to the world:we don’t want war but we r ready for it.

The member of National Assembly, Nafisa Shah hailing from Pakistan People’s Party also condemned the war hysteria of India and demanded the government of Pakistan to give a befitting response to India.

Indian war hysteria is theatrical and plays to the domestic gallery prior to elections. We stand united with our armed forces. All Indian adventurism will and must get a befitting response. A joint session of the parliament will reinforce this resolve. #StandwithourForces

On the other hand, Sharmila Faruqi also requested that the two nuclear countries should strive for peace and not war.

Not only politicians but even the common people of Pakistan have expressed solidarity with the armed forces of Pakistan. The social media platform is abuzz with heart-warming messages for Pakistan Air Force since the news circulated on social media. They are wholeheartedly appreciating for foiling the intrusion by Indian Air Forces and defending the country from external aggression.

#SurgicalStrike2 was needed to claim the elections, haste for power and agression is what our neighbour always had. Don't fall prey to propaganda of their media. Let #PakistanAirForce handle all the misadventures with spirit, resolve and a befitting rebuttal.

Those who came and ran away while hastily dropping their payloads were certainly NOT the best, but THOSE who made them run back with their pants on Fire were DEFINITELY The BEST. #PakistanAirForce 👌 https://t.co/gAoHpyqZTT

Kudos to #PakistanAirForce and #PakistanArmy for foiling the Indian attempt to launch an attack on our soil. India as usual ran away. I must reaffirm that Pakistan is not interested in starting a war but if India try to force it on us, Pakistan will make it disastrous for them.

We were sleeping but our Soldiers are awake to respond Enemies. May Allah be with them #PakistanAirForce #PakistanArmy #IndianAirCraftsCrossedBorder

The social media did not let go of the occasion to remind Indians of their failures and trended Fake surgical Strike 2 on Twitter.

Salute to brave pilots and airmen of #PAF who chased out intruding #IAF . #Indian Air Force dropped fuel tanks while escaping and projected it as #FakeSurgicalStrike2 . #Pakistanis awaiting #Pakistan ‘s response to provocative act of war by #India as promised by #PMIK pic.twitter.com/2kqi3fg2WY

It takes “45 trees” to fool a nation of a billion who are being led by a war mongering media and politicians who have their eyes on the next elections. India needed closure to all the hype – it now has the opportunity to finally do so. #FakeSurgicalStrike2

Hit them. And hit them hard. Do not let them go back alive. If they want it, give it to them.

Despite a million differences, people are standing and shall always stand by our Armed Forces. https://t.co/Pa6YWXNhAk

My name is tree and i am not a terrorist 🌲#FakeSurgicalStrike2 pic.twitter.com/fmdOVrLKRu

Pakistan security officials say no targets were engaged by the Indian aircrafts. The speed with which they entered and left Pak airspace, no target could be engaged. #Pakistan #India

No casualties and no Damage

Indians during an Airshow burns 300 cars

WWE’s Dwayne Johnson reveals he is a survivor of ‘Depression’

Twitter reacts strongly to the shortage of Rooh Afza in India