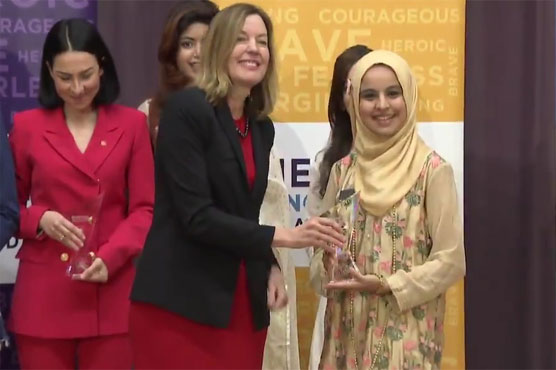 Dania Hassan is a part of the group of 10 outstanding leaders across the globe honored in recognition of their efforts as partners of peace and drivers of economic growth and opportunity.

Dania Hassan after attending US Summer School at John Hopkin’s University in 2016 via Sisters Exchange Program, designed by US-Pakistan Women Council, established an organization named, ‘Fun to Learn’. The organization through their group of volunteers conducts extracurricular activities in several underprivileged schools. She is the youngest high achiever of the Pakistan-US Alumni Network’s “30under30 series.”

Dania Hassan has been honored for promoting positive change in the education sector of Pakistan, the press release said.

Senior officials of State Department, board members of US Pakistan Business councils, students and community members attended the event.

Earlier, a pre-award ceremony was organized by US-Pakistan Women Council at the house of council’s by founding member Shaista Mehmood to celebrate the success of Hassan.

Pakistan’s Ambassador to US, Aizaz Chaudhary lauded the achievement of young Dania Hassan. He also recognized the efforts made by US-Pakistan Women Council in promoting Women empowerment and women entrepreneurship.

Ambassador Chaudhry said that Pakistani youth and women are vibrant, robust, and passionate and are excelling in various fields.

Dania Hassan was a part of American Public Diplomacy that encouraged her to initiate the humanitarian service back in her home country.

Her perspectives about the American society eventually shifted when she interacted with the people back in 2016. She said Americans understands how countries and people are interconnected and face many of the same problems.

Read more: Bollywood’s Dark Secret: Voices that will uncover harassment in the industry

“People may say one thing, but to me, the American people are kind, caring, and passionate about helping others,” she says. “I’d say my organization gives an example of that.” Much of her organization’s limited budget is funded by Americans.

Each year US State Department organizes the ceremony to honor the young global stands-out in the fields ranging from educators and young entrepreneurs to women in government and development. The ceremony is followed by two-weeks of seminars, discussions, and workshops with experienced practitioners of positive social change in their respective fields.

Previous articleHere is why Meesha Shafi is leaving Pakistan
Next articleMeghan and Wallis: US divorcees in British royal history

22 June 2021
Previous articleHere is why Meesha Shafi is leaving Pakistan
Next articleMeghan and Wallis: US divorcees in British royal history