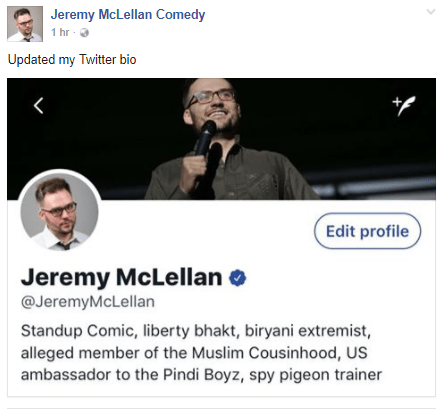 Jeremy McLellan, Pakistan’s favorite American comedian is facing a backlash from Indians and Zionists as he posted multiple tweets condemning the US State and the Israeli government for the massive killings on the Gaza Border in the past few days. In his tweets, he has called out the American State to withdraw their support for Israel.

In one of his tweet, Jeremy McLellan criticized Israel for killing innocent and unarmed Palestinian children. He also pointed the biased reporting of western media that painted the Palestinians as rebels, breaking the laws and inciting violence.

He further added that it is a propaganda of western media to call the protest as a retaliation to the opening up of US embassy in Jerusalem. He shared a video, which he called has explained the real reasons for protest. He also took a dig at both the Republicans and Democrats for their unwavering support for Israel.

Read more: Key dates in the history of the Palestinians

People criticized him for aggressively advocating for the Palestinians when he is a comedian. Jeremy responded by stating,

“People keep asking me why the name of this page is “Jeremy McLellan Comedy” when I also post serious things about politics and religion. But that’s just the shortened name. The full name is “Jeremy McLellan Comedy And Politics And Religion And Pakistan And Palestine And Kashmir And My Wife And My Upcoming Baby And Whatever Else I Want To Talk About Okay Now Leave Me Alone.” Hope that helps!”

Jeremy confronted the backlash from Indians when he criticized Indian Government for the brutal killings in disputed Kashmir. The Indians accused McLellan of being paid from Pakistan to make such tweets. He takes it as an opportunity to dig puns at the Indians instead!

Facebook has also issued him a warning. The detractors accuse Jeremy McLellan of actively propagating false news by calling the Palestinians innocent. Others have appreciated him for bravely calling out Israel and American State for their brutalities in Palestine. People from all over the world supported Jeremy McLellan on his proactive protest against Israel’s aggression.

Jeremy is not afraid of speaking up his mind, “I talk about what I want to talk about. Sorry I’m an actual person and not just a court jester here for your amusement.”

Prince Salman: An outlier in the conservative state