The Pakistan Navy’s first indigenously designed vessel, the Fast Attack Craft (Missile) or the FAC (M)-4 has been constructed and its inauguration ceremony was held at the West Wharf of the Karachi Shipyard. 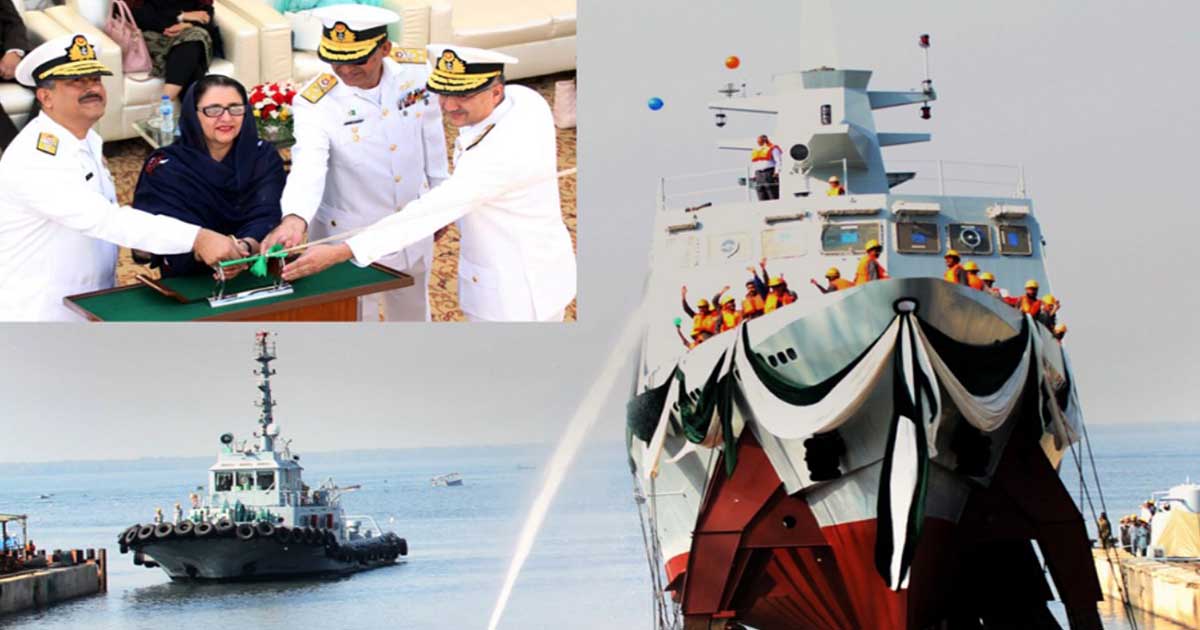 A statement issued by the Directorate General Public Relations (Navy) revealed that the Minister for Defense Production, Zubaida Jalal was the Chief Guest for the inauguration ceremony.

The inauguration ceremony was attended by a large crowd of high ranking ministers and officials from the federal and provincial governments, the Pakistan Navy and the KS&EW.

The FAC (M)-4 is a 63-meter long, high-tech, advanced multi-mission vessel with a displacement capacity of more than 560 tons. The Craft is propelled by four shafts and a boosts a 30-knot speed. The Navy intends to equip the FAC (M)-4 with indigenously-developed sensors and anti-ship missiles.

The vessel has been indigenously designed by the Maritime Technologies Complex (MTC), stated the statement issued by the Navy.

Addressing the inauguration ceremony, the Minister for Defense Production Zubaida Jalal congratulated the Pakistan Navy, the Karachi Shipyard & Engineering Works Limited and the Maritime Technologies Complex for this extraordinary feat towards actualizing Pakistan’s goal of indigenization and self-dependence.

Jalal observed that the KS&EW is one of the few public sector industries that has exhibited an impressive improvement in the last ten years, providing itself a sustainable, revenue-generating body of the Ministry of Defense Production.

Jalal observed that in order to facilitate the economic growth of the country in the future, the Ministry of Defense Production has a robust agenda to pursue the development of new shipyards. She observed that the newly designed Missile Craft will prove effective at safeguarding the sea frontiers of Pakistan.

Addressing the inauguration ceremony, Rear Admiral Ather Saleem, the Managing Director of KS&EW, expressed his gratitude to the Pakistan Navy and the Ministry of Defense Production for their persistent support and assistant.

He observed that during the last few years, the KS&EW has concluded multiple products in line with international standards on quality control. Therefore, the Pakistan Navy has reestablished its confidence in the Karachi Shipyard by awarding construction contracts for the HANGOR class submarines, Bollard Tugs, and MILGEM Class Ships.

Rear Admiral Saleem added that the construction on the Bollard Tugs has begun while there has been progress in the arrangements for the construction of the MILGEM Class ships and HANGOR Class submarines according to plan. He assured that the KS&EW is dedicated to ensuring that all these challenging construction projects are completed on time and in accordance with the international quality control standards, without exceeding the allocated budget.

Previous articlePakistan Went All Out To Highlight Atrocities in Kashmir After India’s Annexation
Next articleHunza: Stunning Hues of Golden Blankets the Valley in Autumn

24 July 2021
Previous articlePakistan Went All Out To Highlight Atrocities in Kashmir After India’s Annexation
Next articleHunza: Stunning Hues of Golden Blankets the Valley in Autumn

Pakistan & Population Explosion: Know When its Time To Stop