According to the World Bank's Logistics Performance Indicator, Pakistan's industry fares one of the worse in the world, proving to hamper the industrialisation Imran Khan has continually stressed upon. The transport sector inefficiencies are costing the economy between 4 to 5% of GDP (Rs. 500 b) each year indicating the need for a massive overhaul of the industry and an overarching policy that directs efficient functioning.

Globally, logistics is a $4.3 trillion industry, contributing an average of eight to 10% to the GDP, creating thousands of new jobs and improving export competitiveness substantially. A look at the World Bank’s Logistics Performance (LPI) for the last 10 years provides sufficient evidence; the countries ranked in the top 20 include the 10 strongest economies in the world.

The performance of the logistics sector provides a stark contrast to the economic recession Pakistan has been mired in. As of December 2018, the logistics sector is valued at $34.2 billion, registering an annual growth rate of 18% between 2017 and 2018 (source: Ministries of Communications and Postal Service). However, experts are quick to point out that the figures present only part of the picture because a large segment of the sector operates in the grey economy with no verifiable records or data.

The transport sector inefficiencies are costing economy between 4 to 5% of GDP (Rs. 500 b) each year indicating the need for a massive overhaul of the industry and an overarching policy that directs efficient functioning

There are about 2,500 logistic and freight forwarding companies in Pakistan that not only serve as shipping companies that transport cargo but also provide end-to-end solutions to customers facilitating trade through sea, air, road transport systems and a combination of these modes.

Recently, the transport industry has jumped to protests and suspension of operations due to policy changes. Operations were impact when the government attempted to revise the axle load limits which stirred controversy between the transporters, business community, and the government. The National Highway Authority (NHA) increased the fines imposed on violations approximately 10 times which was not received well by transporters. A speeding fine, for example, which was previously RS. 750 has now gone up to RS. 10,000 for some vehicles.

A countrywide strike is now being observed by transports and logistics members and Chairman Pakistan Hosiery Manufacturers and Exporters Association (PHMA) Jawed Bilwani voiced fear that if the strike was not called off, exports worth RS. 10 billion could be affected on a daily basis, which would deal a major blow to the government’s goal of enriching exports to narrow the trade gap.

Textile exporters are highly perturbed by the suspension of cargo traffic due to a countrywide strike called by goods transporters.https://t.co/FQuY0gwQB8

“If export shipments are not dispatched timely, exporters will have to resort to air shipments, which cost a great deal more and caused financial loss” said Bilwani.

The World Bank’s LPI presents the latest worldwide view on trade logistics performance across more than 160 countries as seen by logistics professionals. It provides biennial information on logistics infrastructure, service provision, cross-border trade facilitation, and other aspects is invaluable for policy makers, traders, and a wide audience of other stakeholders.

Pakistan’s ranks 95 out of the 160 countries studied with a an aggregate LPI score of 2.64, significantly worse than the highest score 4.19 and not much better than the lowest, 2.00. 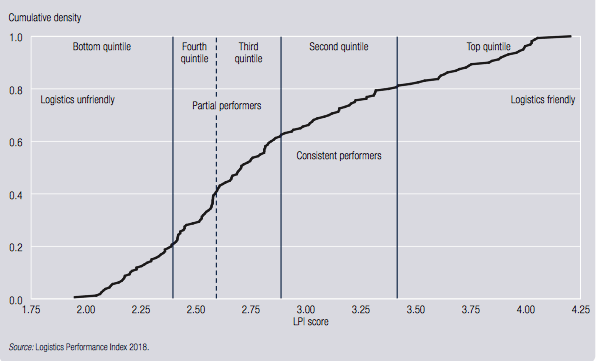 As Pakistan under Prime Minister Imran Khan’s government strives to promote industrialization and wealth creation to place the country on the road to sustainable economic growth, it is imperative to understand the impact of the logistics industry for the economy. According to Pakistan Infrastructure Implementation Capacity Assessment, the transport sector inefficiencies are costing the economy between 4 to 5% of GDP (Rs. 500 billion) each year indicating the need for a massive overhaul of the industry and an overarching policy that directs efficient functioning.