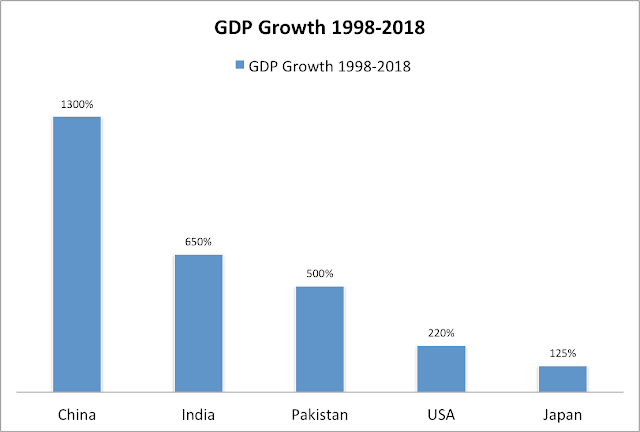 Tyler Cowan declared Pakistan’s economy to be the most underrated in the world.

Bloomberg columnist and economist Tyler Cowan, citing a range of factors from a strong stock market to a booming retail sector, declared Pakistan’s economy to be the most underrated in the world. The Wall Street Journal credited a growing middle class for fueling economic growth. Even back in 2015, Forbes contributor Daniel Runde, pointing to reduced instability and promising economic reforms, was predicting that Pakistan could become ‘the next Colombia’.

There has indeed been very real progress. Last June, when Finance Minister Ishaq Dar unveiled the budget for Pakistan’s new fiscal year (which runs from July through June), he announced achievements galore: 4.7% GDP growth, the highest in eight years; an average inflation rate of less than 3%, the lowest in a decade; and foreign exchange reserves of nearly $US22 billion, a new national record. Additionally, last year the investment analysis firm MSCI, citing improvements in transparency and liquidity, upgraded Pakistan’s market status from frontier to emerging, a reclassification that could increase foreign investment inflows.

Pakistan is regarded as an Asian troublemaker, not an Asian tiger, thanks to its well-chronicled struggles with poverty and terrorism

These economic triumphs are remarkable for a nation long regarded as an Asian troublemaker, not an Asian tiger, thanks to its well-chronicled struggles with poverty and terrorism. In Washington these days, Pakistani diplomats happily hand over meticulously prepared dossiers, replete with snazzy spreadsheets and statistics, to disabuse anyone of the notion that their country isn’t economically ascendant.

The more sobering side to this story.

First, Pakistan has crippling energy and water shortages. Electricity deficits have compelled scores of factories, including those dealing with textiles – one of Pakistan’s largest exports – to shut down. Meanwhile, water shortages pose big problems for agriculture, which consumes more than 90% of Pakistan’s water and employs more workers than any other sector in the country. Water woes have prompted many farmers to seek new livelihoods in cities already struggling to provide jobs for their swelling populations.

In the first eight months of Pakistan’s current fiscal year, exports fell by 12% when compared to the same period the year before.

Pakistan’s export performance is poor. In the first eight months of the current fiscal year, exports fell by 12% when compared to the same period the year before. Pakistani government assessments attribute the slide to economic slowdowns in China and the EU – both key export markets for Pakistan – and low levels of investment in export sectors. However, the chief explanation for Pakistan’s sluggish exports is the same it has been the same for decades: the country’s export mix lacks diversity.

Pakistan has some high-growth industries, including an impressive IT sector that sends 10,000 graduates into the market each year

While many developing economies in Asia have gradually embraced the services sector and gravitated away from traditional manufacturing, Pakistan has stuck to low-value-add textiles. It has some high-growth industries, including an impressive IT sector that sends 10,000 graduates into the market each year, but textiles – that face stiff competition from those produced by China, India, and Bangladesh – still account for the bulk of Pakistan’s exports.

Islamabad has put most of its economic eggs into the CPEC basket, banking on the mega project’s potential to bring more roads, energy security, and connectivity to a nation that badly needs these things

The China-Pakistan Economic Corridor (CPEC), a much-hyped, $51-billion, China-funded mammoth infrastructure project, could backfire economically for Pakistan. Islamabad has put most of its economic eggs into the CPEC basket, banking on the mega project’s potential to bring more roads, energy security, and connectivity to a nation that badly needs these things. And yet, there’s reason to fear CPEC may not achieve its potential. Security risks – from separatist insurgents and Islamist terrorists to organized crime outfits – could endanger construction, despite Pakistan’s vows to deploy troops as protection. Additionally, Chinese companies have quietly backed out of several CPEC commitments.

CPEC poses long-term risks to Pakistan’s economy. With so much Chinese investment pouring into Pakistan, other potential foreign financiers could eventually conclude that Pakistan no longer provides a level playing field. Additionally, Pakistan will need to pay back billions of dollars in CPEC-related loans to China – up to $90 billion over 30 years, according to one estimate. Meeting these debt obligations, say some financial analysts, will be a tall order for Pakistan.

The economic prospects under a dark cloud

25 million 5-to-19 year-olds aren’t in school, millions of children are malnourished, and more than 600 children die each day from waterborne illness.

Pakistan’s economic prospects are clouded by the precarious future of its most critical asset – its young people. About 60% of its 200 million-strong population are 24 or younger; the average age is average age is just 22. And yet 25 million 5-to-19 year-olds aren’t in school, millions of children are malnourished, and more than 600 children die each day from waterborne illness. Even those lucky enough to stay healthy and receive an education struggle to penetrate the job market; barely 5% of Pakistanis receive proper technical or vocational training, and many lose out on jobs to more well-connected (albeit less qualified) candidates. Little wonder Pakistan’s labor market has struggled to absorb top-notch, competitive young people into the workforce.

So while Pakistan is an economic success now, the progress of the present and recent past could easily be squandered down the road.

Michael Kugelman is deputy director and senior associate for South Asia with the Asia Program at the Woodrow Wilson International Center for Scholars in Washington, DC. This article was first published in Foreign Policy and has been reproduced with permission. The views expressed in this article are the author’s own and do not necessarily reflect Global Village Space’s editorial policy.

Whose lockdown version is better? Sindh or Central?