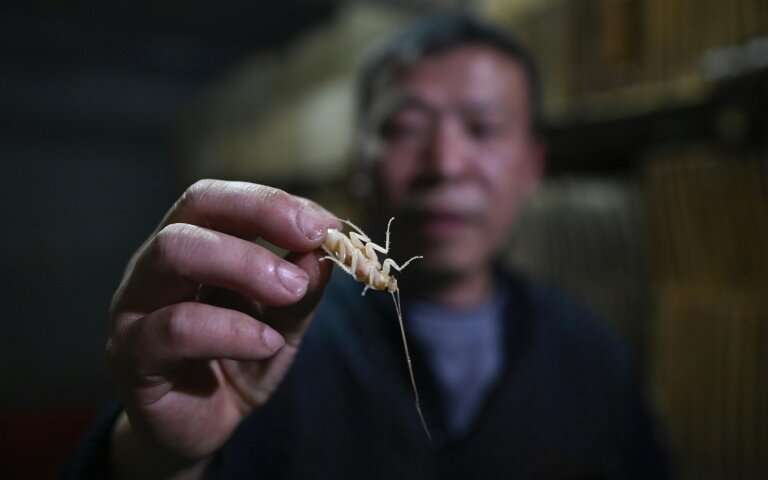 As farmer Li Bingcai opened the door to his cockroach farm in southwest China, an insect the size of a dart flew into his face. Picking the critter off his forehead, he tossed it back into the dark room where some 10 million more of its kind scurried around, housed in wooden frames perched on shelves.

The six-legged creatures may be a bugbear for most, but Li and other breeders in China are turning them into a niche business. Some sell cockroaches for medicinal purposes, as animal feed or to get rid of food waste. Li breeds them for something else: food for human consumption.

Customers have been clamouring for a taste after hearing about the dish’s health benefits, said owner Fu Youqiang, who cooks up to 30 orders a month.

A restaurant down the road from his small facility fries them up infamously spicy Sichuan sauce for the gutsier eaters. “People don’t believe how good it is until they try some,” Li told AFP, putting a live one into his mouth as others crawled all over the place and people visiting.

Known colloquially as American cockroaches, the Periplaneta americana is one of the largest species and are consumed for a variety of ailments: stomach ulcers, respiratory tract problems, and even simply as a tonic.

“The greatest effect of cockroaches are that they have great immunity, which is why humans will absorb its benefits after eating them,” Li said, noting that in China cockroaches are dubbed “Little Strong” because they can live for days even after being cut in half. Tucked at the edge of bamboo-covered mountains in Yibin, Li’s facility is a nondescript single-storey former farmhouse surrounded by crop fields and livestock farms.

The breeding area is roughly the size of a badminton court, with windows sealed off with netting to prevent any great escapes. Security is paramount: In 2013, some one million cockroaches escaped a farm in eastern Jiangsu province roamed free after their greenhouse was destroyed.

Some sell cockroaches for medicinal purposes, as animal feed or to get rid of food waste. Li breeds them for something else: food for human consumption.

Li’s cockroaches live between the spaces of square wooden frames that are held together by pipes and stored in racks lining two rooms. The place is kept warm and humid, leaving a smell reminiscent of damp clothes. Feeding time causes a frenzy — as Li heaps a mix of ground corn, fruit and vegetable peelings on small trays, the insects suddenly swarm the platforms, crawling over each other.

“We breed them in a hygienic environment. They eat proper food — nothing synthetic,” he said. Every three months, Li harvests the cockroaches to keep the population under control by dropping some into a vat of boiling water before dehydrating the carcasses.

Read more: WTO favours US in grain dispute with China

Last year, he sold one tonne of dried cockroaches to a pharmaceutical factory for nearly 90,000 yuan ($13,500). Li ran a mobile phone shop when he went into cockroach farming in 2016 because it was low-cost business and the insects are easy to rear. He converted his farmhouse and bought eggs from another breeder.

His main source of income is from selling the insects directly to farms or medicine factories, and this is supplemented by an online shop his daughter helped set up. Half-a-kilo (1.1 pounds) of whole dehydrated insects retail for between 100 and 600 yuan ($15-$90).

The six-legged creatures may be a bugbear for most, but Li and other breeders in China are turning them into a niche business.

In neighbouring Xichang, the Gooddoctor Pharmaceutical Group runs the world’s largest cockroach farm where a whopping six billion insects held in a facility that employs artificial intelligence in monitoring movement and environmental conditions.

Cockroaches were added in the late 16th century to the Compendium of Materia Medica, the most comprehensive medical book ever written about traditional Chinese medicine. The bugs have detoxifying properties and can act as a diuretic, said Liu Daoyuan, chief specialist at the Yinchuan City Yongshou Medical Centre.

“It is also effective for relieving sore throat, tonsillitis, (liver) cirrhosis and fluid build-up,” he added. But other Chinese medicine experts caution that a poorly regulated industry with a low barrier of entry could result in adverse effects.

“Anything in excess can be harmful, even ginseng,” warned Goh Chye Tee, director of the Chinese Medicine Clinic at Singapore’s Nanyang Technological University.  He noted the insect is not named China’s official compendium of drugs covering both Chinese and western medicine.

His main source of income is from selling the insects directly to farms or medicine factories, and this is supplemented by an online shop his daughter helped set up.

But Li is more interested in turning roaches into a delicacy and is working with a local restaurant. Customers have been clamouring for a taste after hearing about the dish’s health benefits, said owner Fu Youqiang, who cooks up to 30 orders a month.

Diner Luo Gaoyi, who was trying the insect for first time, described it as being “quite tasty, very fragrant, very crispy”.  “I think that anything good for health should be eaten, no matter what it is,” he said. “These have high nutritional value and are high in protein.”

Li is also working on expanding his line: cockroach-laced medical cream, cockroach medicated plasters, and insole inserts containing cockroach essence. He said: “There is so much good in this one insect, I want to tell more people about it. A lot of people think it’s a pest but to me, they are gold. They are like my children.”

While Chinese & Trump’s interests may align, Pompeo has some other plans

China vs West: A Race to Grab the Power Throne