‘Parchi’ set to be the first Pakistani hit of 2018 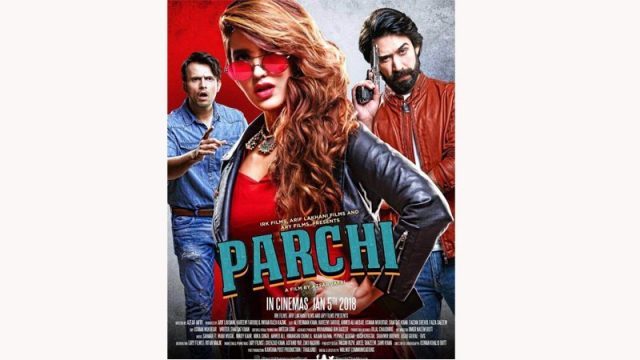 Pakistani film ‘Parchi’ featuring the gorgeous Hareem Farooq and Ali Rehman in leading roles is expected to release in cinemas on January 5th, 2018.

The team is hoping the movie to be a big success since it is expected to garner huge profits. Apart from Pakistan, the movie will be released in various countries including the USA, UK, UAE, Canada and a few others countries.

‘Parchi’ will be the first Lollywood movie to be screened in Saudi Arabia. Also, it will be released in France as well on 19th of January 2018.

Sahara rap band from the UK has sung for the first time for a Lollywood movie in ‘Parchi’. They sang the song ‘Billo Hai’ for this film. So far, the song has generated 1.5 million views on YouTube.

Osman Khalid Butt after having a successful experience in writing and acting has now ventured as the director of choreography in Parchi.

Comedian Faiza Saleem will be making her big screen debut in Parchi.

‘Parchi’ is the first Lollywood movie to be released in 2018. It is expected that movie will provide a vital lift to the cinema and entertainment industry in Pakistan.

Hareem Farooq is actively promoting the movie on all her social media accounts. Time and again she is seen encouraging her fans and followers to watch the movie in cinemas.

#parchi trailer out! #5thjan2018 #parchiaarahihai go check it out! tell me what you think! Do share! #parchiwillblowyourmind ✨ click on the link below:https://t.co/ycctMaX72O

She has even added her fictional name in movie ‘Eman’ to her Twitter handle.

A fan asked Hareem on Twitter another day if she is working on other projects as well alongside the movie.

The actress replied currently that her focus is purely on her movie ‘Parchi’ these days.