Speaking at a National Seminar on Pakistan’s economy, Chief of Army Staff General Qamar Javed Bajwa stressed upon the need to establish peace amongst neighbors for lasting stability and economic growth. 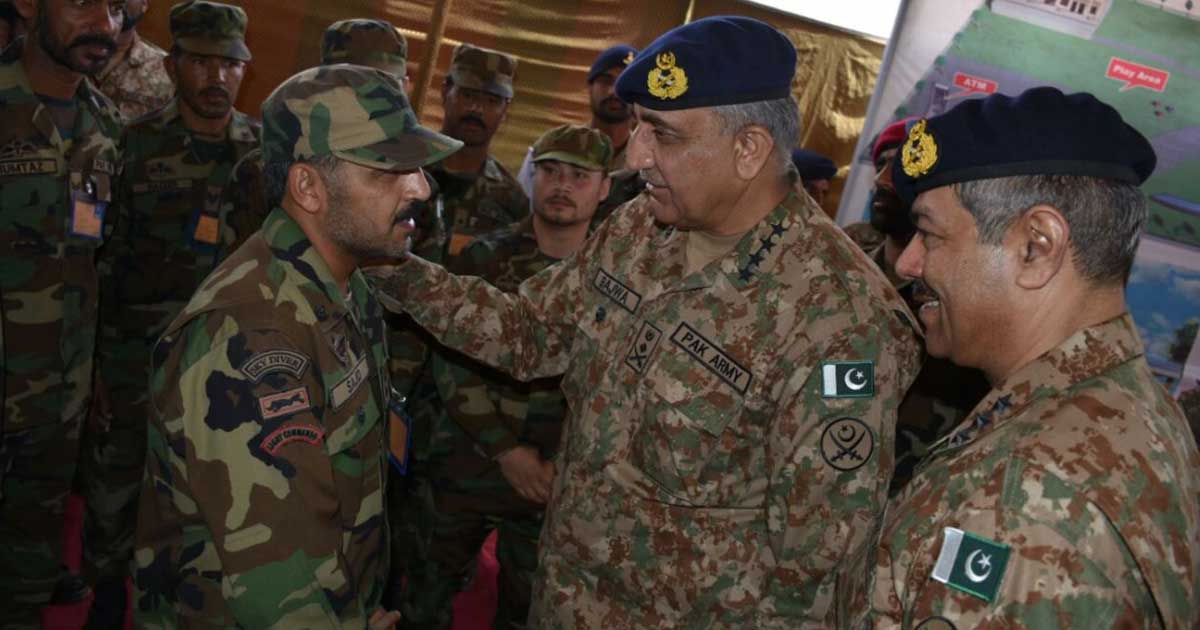 The Chief of Army Staff, General Qamar Javed Bajwa, on Thursday, stressed that sustainable growth is only possible through peace with our neighbors. Addressing the national seminar on “Pakistan’s Economy: Challenges and Way Forward”, organized by the Institute of Strategic Studies, Research and Analysis (ISSRA), held at the National Defence University (NDU).

Speaking rather candidly at great lengths, the Chief stressed that peace across the neighborhood is instrumental for sustainable growth. He emphasized the need for peace overtures with all neighboring countries, including India.

Gen Qamar Javed Bajwa informed that he had delegated the Inter-Services Intelligence (ISI) to carry out a study, and conduct an analysis of the pros and cons of establishing peace with India. The Chief mentioned that in the past, the establishment had always been adverse to any prospects of peace with India.

Army or ISI can study the pros and cons of peace, of allowing Afghanistan direct access to India through Pakistan but these would be futile concessions totally.

The report submitted by the ISI counted many more pros than cons on the subject of peace with India, and consequently, peace overtures were extended towards New Delhi.

Talking about his meeting with the Afghan President, Ashraf Ghani, earlier yesterday, the Chief of Army underscored that the two sides are coming to an agreement towards allowing Afghan transit trade. He mentioned that Pakistan has even allowed the Afghan trade access to our eastern borders, which has been one of the greatest stumbling blocks from Afghanistan.

The Chief added that economic security is instrumental and the most important requirement for growth and stability, far more important than national security, as all other elements are worthless until the people of a country have access to food, clothing and shelter.

Gen Qamar Javed Bajwa stated he has had to undertake several foreign missions to ask Pakistan’s friends to lend some money for the treasury, a task that he discovered to be immensely “demeaning and demoralizing” but he stressed that he didn’t hesitate for the betterment of his country.

Agreeing with Dr. Ashfaque Hassan Khan, the Dean of NUST, who put forward compelling arguments on realistic strategies to increase revenue, the Chief noted that while corruption is the root cause of the current economic crisis, it is important to set realistic goals for revenue generation and improvements.

Jan Achakzai, Chairman of the Center for Geo-Politics and Balochistan, observed that the Chief of Army Staff has signaled “all-out support” for the economic reforms proposed by the Imran Khan-led government.

Achakzai said, “He (COAS) is keen to stress the country’s needs to turn around its economic mess. He shared the business community and economists’ concerns on Dar economics (borrowing to pay debt and fudge data) during previous governments.”

1/5) THREAD—#COAS signals all out support 4 ImranKhan govt’s economic reforms.
He is keen 2 stress country’s needs 2 turn around its economic mess;

Achakzai observed that the former PPP and PML-N governments did not take any measures to expand the tax base, reduce the current account deficit by boosting imports, or enhance productivity, and handed over an economic mess to the PTI-led government.

The political analyst further added that during the last 9 months, the PTI-led government has paid off $9.5 billion worth of debt, and the current account deficit has been reduced to $1 billion a month.

Achakzai noted, “Since Pakistan’s low revenue base has national security implications, the COAS was worried and is anxious to see through these reforms.”

3/5) On debt, IK Govt paid off $9.5 bill in last 9 months, borrowed by PML-N govt, net borrowing is ONLY $2.5 bills;
it reduced CAD 2 a $1 bill a month.
Since 🇵🇰-‘s low revenue base has national security implications, #COAS was worried & is anxious 2 see through these reforms.

Achakzai added that the COAS’s membership in the National Economic Council is meant to send a strong message to all provinces, bureaucracy and businesses that the Army will not be a by-stander if economic governance is “sacrificed for politics or hiding behind the 18th Amendment.”

4/5) National Economic Council w/ COAS as member is meant 2 send a strong message 2 provinces, bureaucracy & businesses that #Army can not be a by-standard if economic governance is sacrificed 4 politics or hiding behind #8th amendment.— Jan Achakzai / جان اچکزئی (@Jan_Achakzai) June 28, 2019

Commenting on the Chief’s proposal of establishing peace with Kabul and New Delhi, senior defence analyst Zaid Hamid told GVS that such goodwill gestures will only “humiliate” our institutions.

Zaid Hamid said, “We are already humiliating ourselves under a notion that we can have peace with India and Kabul. Showing goodwill gestures to the limits of embarrassment, yet the Hindutva goons in Delhi and Khad communists in Kabul continue to hit us with increasing ferocity.”

Hamid added, “Army or ISI can study the pros and cons of peace, of allowing Afghanistan direct access to India through Pakistan but these would be futile concessions totally.”

With reference to India’s malignant activities and the prospects of peace, Zaid Hamid concluded, “India plans our annihilation and it’s never going to miss this opportunity when we are the weakest, economically and divided as a nation. I hope GQB and Army understand this before we bleed more.”

Journey of Yashma Gill: From Atheism Towards Allah

How the Afghan Endgame can spiral out of control