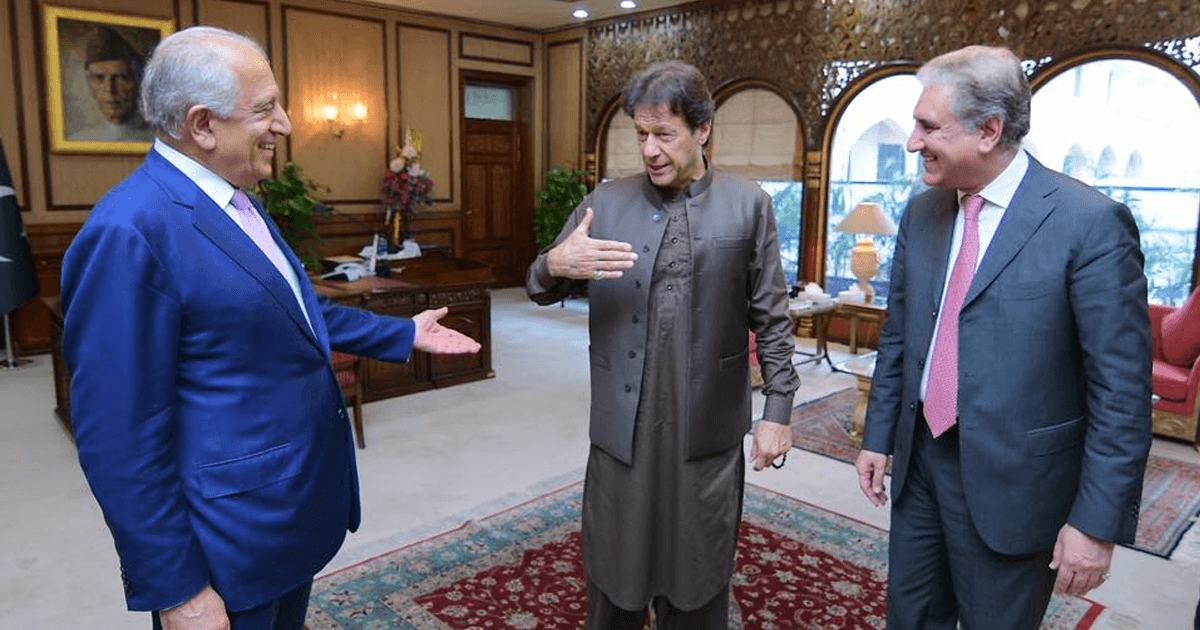 U.S. Special Representative for Afghanistan, Zalmay Khalilzad arrived on August 1 in Islamabad as part of a tour of the region following the seventh round of direct talks with the Taliban in Doha.

Khalilzad, who is visiting Islamabad for the record eighth time in less than a year, met Prime Minister Imran Khan and Foreign Minister Shah Mehmood Qureshi and shared the outcomes following the 7th round of U.S.-Taliban peace talks in Doha and his recent engagements in Kabul.

Welcoming the progress achieved in the talks and the intra-Afghan peace conference in Doha where all participants agreed to a basic roadmap, Qureshi reiterated his country would continue to play a supportive role for smooth progress and successful outcome of peace efforts aimed at ending a lingering war in neighboring Afghanistan.
Read more: Peace in Afghanistan only Possible with Pakistan’s Support: US Senator

“It was noted that ultimately the intra-Afghan dialogue would be vital to reach an agreement where Afghanistan becomes a stable, peaceful and prosperous country,” read a statement from the Foreign Ministry. “It was also stressed that taking the Afghan peace process forward remained a shared responsibility.”

Khan reiterated Pakistan’s commitment to remain engaged with the U.S. and other stakeholders in facilitating the peace and reconciliation process in Afghanistan, according to a statement from his office.

Last December, Pakistan confirmed it arranged rare direct talks between Washington and the Taliban, paving the way for a negotiated settlement of the conflict.

The process, however, is still awaiting a breakthrough as the Taliban have turned down repeated U.S. requests for inclusion of the Kabul government in the talks.

Pakistan also facilitated the landmark first round of direct talks between the Afghan government and the Taliban in Islamabad in July 2015, but that process broke down after the Taliban announced the death of their long-term leader Mullah Omer, triggering a bitter power struggle within the militia.

Khalilzad’s trip was his first visit to Pakistan after a meeting between U.S. President Donald Trump and Khan last month at the White House where Islamabad agreed to persuade the Taliban to negotiate with the Kabul government — a demand the militia has long been rejecting.
Read more: US could kill 10 million, win Afghanistan war in 10 days: Trump

Recalling his recent interaction with Trump in Washington, Khan emphasized that a peaceful and stable Afghanistan was in the interest of Pakistan as well as of the broader region. He also expressed satisfaction at the evolving international consensus and interest in fully supporting efforts to achieve long term peace and stability in Afghanistan.

Underscoring the need for inclusive intra-Afghan negotiations to evolve a roadmap for future of Afghanistan, Khan underlined the importance that Pakistan attaches to a broad-based and enduring relationship between the two countries

How to end prevailing deadlock in Afghanistan