Pentagon surplus handouts stoke the militarization of US police

The US police is a heavily militarized force, receiving surplus military equipment from the Pentagon. This includes armoured vehicles, ammunition, grenades, explosives and guns. Could this be one of the reasons the police is excessively violent even in routine operations? 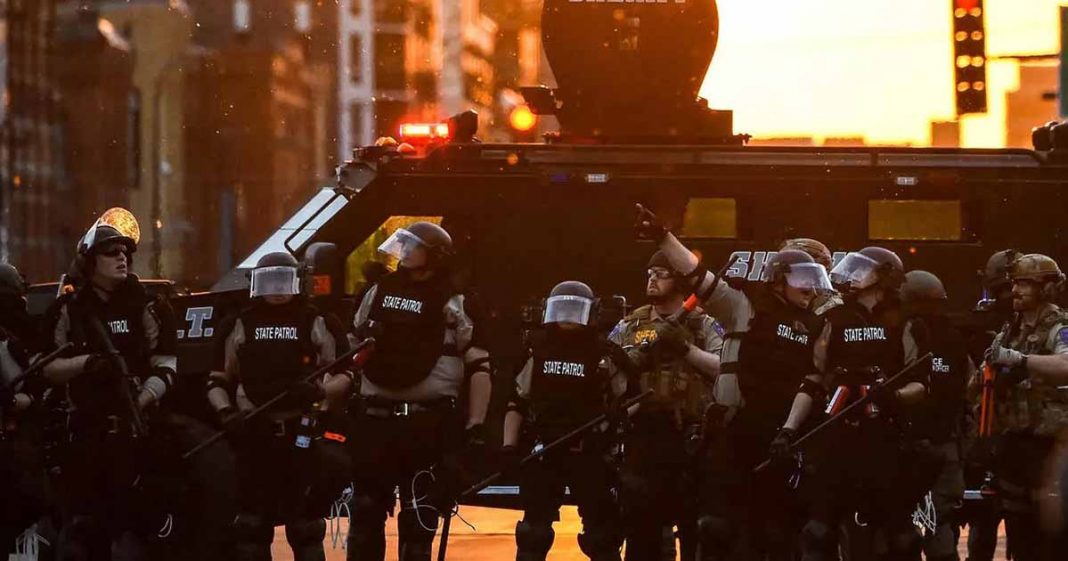 When US police flooded the streets around the country to confront protesters two weeks ago, for many it appeared like the army had deployed, with camouflage uniforms and combat gear, heavily armoured anti-mine vehicles, and high-powered assault weapons.

That’s not by accident. For years the US Defense Department has been handing its surplus equipment over for free to police departments — and the departments, large and small, have revelled in it.

Critics say it has been part of the overall militarization of the police, and helped fuel mass nationwide demonstrations against police abuse and deadly tactics that began after the May 25 killing of a handcuffed African American, George Floyd, by a Minneapolis police officer.

Other large cities have them too, but also small towns.

In 2013 police in Flathead County, Montana, which has 90,000 residents nestled near the scenic Glacier National Park, received a landmine-resistant armoured vehicle, one year after taking delivery of a military transport.

The 10-person (two only part-time) police department in Ada, Oklahoma, population 16,000, got their mine-resistant armoured car in July 2019, after stockpiling 34 M-16 assault rifles over the years.

In a country where many people have their own guns and where schools have suffered mass shootings, even local education districts are taking advantage of the Pentagon’s handouts.

The 47 primary and secondary schools of the Bay District in Panama City, Florida acquired no less than 27 assault rifles and two mine-resistant armoured vehicles in 2012 and 2013.

The militarization of police departments has been a feature of U.S. domestic law enforcement since the 9/11 attacks. What is clear from the latest round of protest and response, is that despite efforts to promote de-escalation as a policy, police culture appears to be stuck in an “us vs. them” mentality.

In the years that followed, domestic law enforcement in the United States began a strategic shift toward tactics and practices that employed militarized responses to even routine police activities.

The “1033” Pentagon surplus program has existed for years.

Since 1997, the US military has distributed used and new equipment ranging from handguns to helicopters to armoured vehicles, worth around $8.6 billion, to more than 8,000 federal, tribal and local police forces, according to the US Congress.

From @WSJopinion: The 1033 program, which lets the Pentagon give surplus equipment to law enforcement, still adds value. But there are ways to reform it, write @K_Jack_Riley and Aaron C. Davenport. https://t.co/YY96Y9crgu

In 2015 President Barack Obama severely limited the program, but his successor Donald Trump restored it in 2017.

That year alone, some 500 million pieces of military equipment were transferred to the country’s police services under the 1033 program. But the recent anti-police protests have recharged efforts to stop it.

This week around 200 lawmakers in Congress, mostly Democrats, sponsored a bill, the “Stop Militarizing Law Enforcement Act”, to again reel in the program.

The bill, in the House of Representatives, would strictly limit the transfer of guns, ammunition, grenades, explosives, certain kinds of vehicles, and drones and other aircraft designed for the battlefield.

A parallel bill is being prepared in the Senate, pushed by Democrat Brian Schatz, who has fought against over-arming the police for years.

Read more: America faces not one but two pandemics

“It is clear that many police departments are being outfitted as if they are going to war, and it is not working in terms of maintaining the peace,” Schatz told The New York Times.

“Just because the Department of Defense has excess weaponry doesn’t mean it will be put to good use.”

Schatz and Republican Senator Rand Paul attempted to push through a similar law in 2014, after the first publication of details of the 1033 program, amid the riots over police brutality against African-Americans in Ferguson, Missouri.

The protests and riots that broke out over the police shooting of 18-year-old Michael Brown were met by police officers carrying assault rifles and driving armored cars they got from the Pentagon.

Recorded on video and surveillance cameras, Brooks’s fatal encounter with police was the latest in a string of incidents that has sparked a wave of nationwide protests over police brutality.

“I do not believe this was a justified use of deadly force,” Bottoms said. The officer who shot Brooks — identified as Garrett Rolfe — was dismissed.

The death drew expressions of outrage, shock and dismay in a country deeply shaken by civil unrest since the May 25 police killing in Minneapolis, Minnesota of George Floyd, an unarmed black man.

The Wendy’s restaurant where 27-year-old Rayshard Brooks was killed was set on fire Saturday and hundreds of people marched to protest the killing.

Previous articleAmerica faces not one but two pandemics
Next articleEU and US talks against China: EU diplomatic chief

17 September 2021
Previous articleAmerica faces not one but two pandemics
Next articleEU and US talks against China: EU diplomatic chief

Rayshard Brooks shot in US: fiery protests and debate ensue

US will keep 5,500 troops at Mexico border to stop illegal immigration