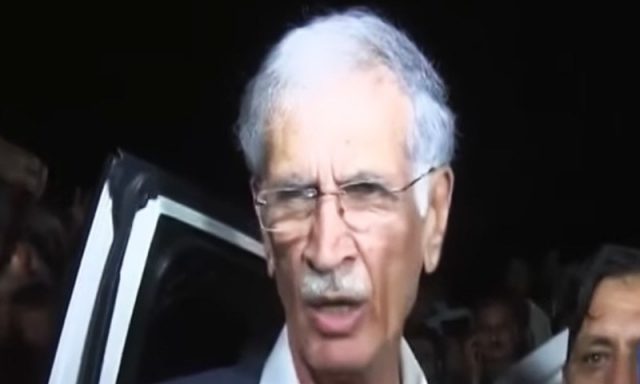 In a video circulating on social media, Pervez Khattak is seen slut-shaming PPP’s female workers at a political gathering at Akora. He uses the word ‘Tawaif’ to refer to the female supporters of Pakistan People’s Party. The viral video spurred reaction on social media and Khattak was subjected to immense criticism. People remarked that Pervez Khattak has disappointingly crossed the line and must retract his words.

The criticism not only came from his political opponents but also from PTI’s supporters. Several Tehreek-I-Insaf supporters are irked and have bashed Khattak for his irresponsible behavior.

Imran Khan has remained silent on the issue. His silence is worrying his supporters who expected Khan to reprimand Khattak for his shameful comments.

Khan, who repeatedly schools his political opponents for passing derogatory remarks, seems to be oblivious to the fact that a failure to confirm ethics within his own party may wreck it in the long run.

Read more: CM Khattak claims he was asleep when mob attacked PTV during…

Previously, other political candidates have been resorting to misogynistic remarks to belittle their female opponents in election campaigns. Pakistan Muslim League Nawaz leader, Sheikh Waqas Akram has reportedly quoted Quranic verses to discourage people to vote for a female candidate contesting election against him.

Popular leaders like Sheikh Rasheed, Khwaja Asif, Abid Sher Ali, Rana Sanaullah have been time and again attributing below the belt comments to women. It is also alleged upon the leaders of Pakistan Muslim League-Nawaz to have sponsored Reham Khan’s controversial book that maligns the PTI female workers and female anchorpersons.

With the preponderance of evidence of misogyny, the respect of women must now be treated as a mandatory prerequisite in selecting the legislatures for National Assembly.

Previous articleIran lodges complaint against US over renewed sanctions
Next articleNAB grabs NTS in a corruption scam worth Rs.158 million

21 September 2021
Previous articleIran lodges complaint against US over renewed sanctions
Next articleNAB grabs NTS in a corruption scam worth Rs.158 million

What did Ch. Pervez Elahi offer to Maulana Fazlur Rehman to end protest in Islamabad?

“I was not in Israel”, Jemima Goldsmith to Ghinwa Bhutto

NAB took away my ‘special seat’ on orders of PM Imran: Shehbaz