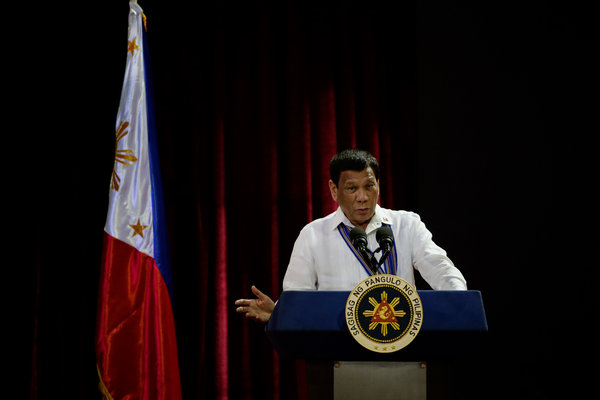 The firebrand Filipino leader Rodrigo Duterte is in the headlines since he imposed Martial Law in the entire Mindanao on May 23 amid the attacks of terrorist Maute Group in Marawi City. The group is feared to have links to ISIS. However, the imposition of the martial law has created fears as many feel that he would steer the country towards an iron-hand and dictatorial rule on the lines of the dreaded Ferdinand Marcos. The Philippines stayed under martial law for close to fifteen years from the 1970s until 1986.

President Rodrigo Duterte has done this through launching an ‘anti-Islamic State’ drive with full gusto. Reuters reported him as saying that a rebellion on the southern Mindanao island was not the work of rebels from the Maute group but was “purely ISIS”, and he had long warned of Islamic State’s imminent arrival in his country. Duterte said Islamist militants, being driven out of Iraq and Syria, were looking for a new base and the siege of Marawi City was planned a long time ago.

Read more: US: Philippines’ Duterte sparking distress around the world

He further stressed that radical elements were being funded by the illicit drug trade, something which is being aggressively countered by Duterte. The fight against the Islamic State is well underway with hardline retaliatory measures. Duterte has been condemned by international organizations for the strong handed methods and mass extrajudicial executions he is using to curtail the drug lords in his ‘war on drugs’. In his campaign against drugs, the Philippines President Rodrigo Duterte has compared his campaign to kill criminals to the Holocaust, saying he would like to “slaughter” millions of addicts just like Adolf Hitler “massacred” millions of Jewish people. “Hitler massacred three million Jews. Now, there are 3 million drug addicts… I’d be happy to slaughter them.”

According to the Asia Times, the president is now concentrating upon eliciting help from other major rebel groups, including the Moro Islamic Liberation Front, the Moro National Liberation Front, and communist insurgent groups, to tackle IS-affiliates like Maute Group and the Abu Sayaff Group, both of them are involved in the Marawi city siege.

The president has shown his unflinching support for the security forces, however, the manner in which he has expressed this has raised eyebrows. Duterte has said that he would stand by his soldiers even if they commit rape while waging war.

“Until the armed forces and the police say that the Philippines is safe, this martial law will continue. I will not listen to anyone else, be it the Supreme Court, congressmen. They’re not here.”
– Duterte

Opponents may see these remarks as an attempt to instill fear but it could be argued that at a time when security forces are fighting a brutal terrorist organization in ISIS, this is meant to show full solidarity with them.

In order to assuage the concerns of the people, the president has issued a public order. According to the General Order No 1, the constitutional rights of the people will be protected.

The order stated, “the Constitutional rights of the Filipino people shall be respected and protected at all times.”

The order also asserted that the Commission on Human Rights was mandated to “zealously exercise its mandate under the 1987 Constitution, and to aid the Executive in ensuring the continued protection of the constitutional and human rights of all citizens.”

The role of the media was also touched upon in the presidential order. The president ordained media to exercise prudence in order not to compromise the safety of security forces.

“The role of the media is vital in ensuring the timely dissemination of true and correct information to the public. Media practitioners are therefore requested to exercise prudence in the performance of their duties so as not to compromise the security and safety of the Armed Forces and law enforcement personnel, and enable them to effectively discharge their duties and functions,” he said in the order.

Duterte’s allies have managed to remove opposition to the martial law and 15 of the 23 senators in the upper house have affirmed the legality of the Presidential order through a resolution.

Through the order, he also called upon the military to respect the rights of the people as enshrined in the 1987 constitution.

Read more: Focusing on ISIS: Are we losing sight of a bigger enemy?

Here it is important to mention that the president cannot extend the martial law beyond its initial 60 days without the ratification of the legislature. Duterte enjoys a large majority support in the lower but is expected to face a stiff resistance in the upper house. However, Duterte’s allies have managed to remove opposition to the martial law in Mindanao and 15 of the 23 senators in the upper house have affirmed the legality of the Presidential order through a resolution.

Aspersions apart, the martial law has ostensibly been imposed by Duterte to tackle a security threat in Southern Philippines and he currently enjoys support from the population for this measure. The concern remains whether he will use the security crisis to impose martial law in the entire country.

Amid soaring ties with Canada, Saudi Arabia trying to better relations with Iran

Bilawal-Maryam meet-up: Will Imran Khan sign a NRO after Eid?