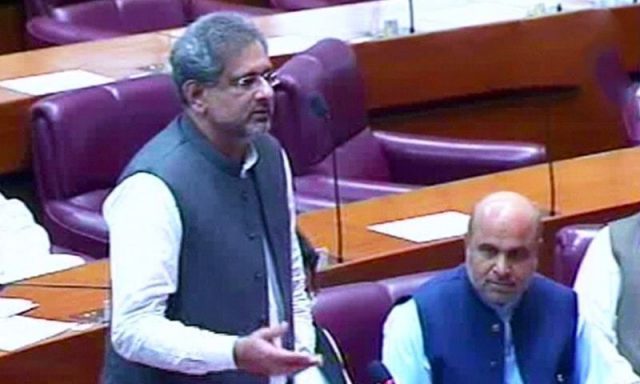 Prime Minister (PM) Shahid Khaqan Abbasi on Wednesday lashed out at National Accountability Bureau (NAB) for launching a probe against ousted Prime Minister Nawaz Sharif, involving alleged money laundering of $4.9 billion to India. PM Abbasi was addressing the National Assembly when he questioned the role of the NAB and demanded to direct its chairman to appear before a parliamentary committee ‘to clarify his position’.

PM was of the view that allegations against Nawaz Sharif were tantamount to ‘pre-poll rigging’ and, therefore, they must be properly addressed. He feared that the country won’t function “if the institutions do not work in their constitutionally defined framework”.

He further said that based upon the manner in which Nawaz’s case has been presented in the accountability court, he (PM Abbasi) did not have high hopes that Nawaz will ever get justice.“Prerequisites of justice should be met in all matters,” the PM said, adding: “Not only should justice be done, it must also be seen being done.”

Nawaz Sharif is using his entire party to save his own political career, and, at the moment, the price is in the form of integrity and dignity of state institutions.

“The Bureau should play its due role against corruption and should fulfill the requirements of justice,” he said, adding that such allegations, just two months prior to the elections, amount to pre-poll rigging.

The PM also reminded lawmakers in the NA that they still had a legal right to amend law related to NAB and its role. His idea, however, had not been appreciated by the opposition parties.

Defence Minister Khurram Dastagir Khan also strongly criticized the NAB for initiating an inquiry into alleged money laundering case against Nawaz Sharif. He also implicitly criticized courts and blamed them for not ‘respecting the sanctity of vote’. “It’s not Nawaz’s trial, but the people’s right to rule is being questioned,” he said, adding that democracy is under siege.

Dastagir also complained that his ‘Quaid’ was disqualified in a questionable way. He assured to respect courts and their decisions but reminded lawmakers that ‘they have a right to criticize the decisions of the court’.

The current wave of criticism on NAB and its chairman is the part of a bigger campaign being run by the PML-N to save Nawaz.

PML-N senior leaders Nehal Hashmi, Talal Chaudhary and Daniyal Aziz have recently not only criticized the apex court over the disqualification of Nawaz Sharif but also threatened honorable judges of ‘dire consequences’ in future. Nehal Hashmi was fined and sent to jail in a contempt of court case.

Syed Naveed Qamar of the PPP has said that he could understand the concerns of PM Abbasi but he disagreed on the matter of summoning the NAB chairman. PPP leader said that it would be tantamount to interference into NAB affairs. “It will be a new precedent if we interfere with the matters of an institution that we ourselves created,” he said. Naveed Qamar has, however, said that he would further consult with his party leadership on the matter.

Pakistan Tehreek-i-Insaf’s Asad Umar categorically opposed the suggestion of constituting a committee on the issue. He also said the summoning Chairman NAB would be “tantamount to the murder of justice and accountability” in the country. “NAB is fulfilling the role that the Finance Ministry should have played on the first day the report came out,” he said.

NAB took a notice of a recent article in a newspaper based on a ‘flawed’ report of the World Bank. It was alleged that ousted PM Nawaz Sharif was involved in the laundering of $4.9 billion to India.

PM Abbasi was addressing the National Assembly when he questioned the role of the NAB and demanded to direct its chairman to appear before a parliamentary committee ‘to clarify his position’.

While the World Bank, however, promptly responded to the NAB move and stated that “the report does not include any mention of money laundering nor does it name any individuals”, the State Bank of Pakistan (SBP) said the estimates showed in the WB report were based on “assumptions” which did not reflect reality.

NAB has also issued a statement after the SBP statement:  “If the World Bank report is not correct, why they have not changed the figure of $4.9bn from Pakistan in its report?”An SBP spokesman told a local media outfit that the bank had issued a clarification twice in the past — in 2015 and 2016 — rejecting the WB report.

Moreover, a WB spokesman said: “We would also like to refer to a statement by the State Bank of Pakistan which rejects estimates of $4.9 billion in remittances from Pakistan to India on Sept 21, 2016.”

Since the disqualification of Nawaz Sharif in Panama Papers case, there has been an unprecedented verbal war initiated by the PML-N top leadership against the judiciary, military, and NAB. Nawaz Sharif and his daughter have questioned the role of the military establishment in Nawaz’s disqualification. Nawaz and his Pakistani liberal sympathizers are blaming military and judiciary to throw him out of the political process in the country. Maryam Safdar has made several speeches alleging judges of the apex court of receiving instruction from ’above’ to sideline his father.

Punjab Higher Education Minister needs to be removed from his position