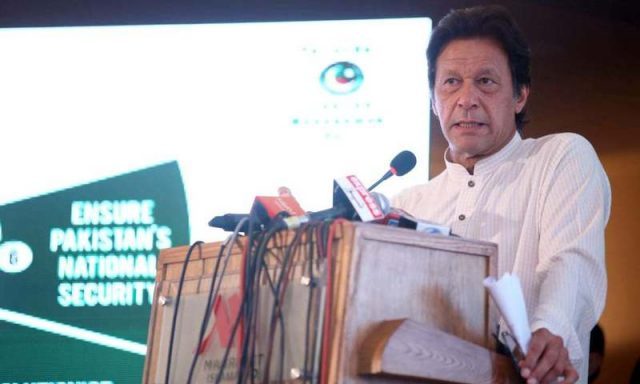 Prime Minister Imran Khan marked 100 days in office with a speech on Thursday in which he touched upon many points such as accountability, poverty uplift and foreign affairs. “Pakistan has no future until the menace of corruption is tackled,”

“Pakistan has no future until the menace of corruption is tackled,”

Accountability was a center point of the PTI’s campaign. PM Khan announced that Pakistan’s Assets Recovery Unit has traced undeclared assets worth $11 billion in 26 different countries, while fake accounts used to launder 375 billion rupees have also been unearthed in the ongoing drive against corruption.

“Pakistan has no future until the menace of corruption is tackled,” he said. “The only difference between developed and developing countries is the presence of corruption.”
The prime minister said that during his first 100 days in office Pakistan has signed Memorandums of Understanding (MoU) with 26 countries, including the United Kingdom, the United Arab Emirates and Switzerland to help locate undeclared assets.

Adviser to Prime Minister Mohammad Shehzad Arbab said that the government had achieved 18 out of 34 targets in its first 100 days, and that work on the other 16 was “in progress.

“Pakistan is facing a current account deficit of $12 billion and this can easily be bridged if looted wealth is brought back,” he said, noting that Pakistan has approached the International Monetary Fund (IMF) for a bailout package 16 times in the last 30 years.
Khan revealed that the government is introducing a “Whistleblower Act” to root out corruption, adding that anyone who helps locate illegal assets will receive a 20-percent share of money recovered.

Khan also outlined initiatives aimed at alleviating poverty and strengthening the economy. He announced the formation of a Poverty Alleviation Authority, which will provide “nutritious food” to at least 4 million pregnant women and, he claimed, reduce the rate of “stunted growth” in children from 43 percent to 30 percent within five years.

Small-scale farmers will be given cash subsidies to improve livestock and increase exports of Halal meat, and 70,000 watercourses will be “lined to conserve water for agriculture.”

The prime minister pointed out that if the government succeeds in increasing investments, exports, and foreign remittances, as well as introducing tax reforms to address the black market, the country will no longer have to “knock at the door of the IMF.”

“A special law is being formulated to ensure that women get their due share of the inheritance,” Khan also announced. “And a Legal Aid Authority is being set up to provide free legal services to poor people.”

The prime minister also acknowledged that the working- and lower-classes were suffering because of “rupee devaluation,” but promised to do his best to address the issue as soon as possible, although he warned of “difficult days” ahead.

“We have to increase the prices of commodities to pay back the loans,” he said while insisting that the poor will soon be given health insurance cards and that their children would soon receive equal education opportunities as a legal right.

Earlier, Finance Minister Asad Umar claimed that the government’s plans to make the process of doing business in Pakistan simpler would create investment opportunities worth 6,000 billion rupees in the next five years.

Umar also claimed the government would create 100 million jobs in five years through “prudent economic policies” and its housing scheme for the poor.

Pakistan & the Outside World

Foreign Minister Shah Mahmood Qureshi noted that during Khan’s first 100 days in power, Pakistan has taken part in 73 bilateral engagements, 16 multilateral engagements, and signed 19 MoUs. The foreign minister also noted an improvement in relationships with Saudi Arabia and the United Arab Emirates, marked by financial aid from both countries, and said that high-ranking officials from both countries would be visiting Pakistan in the near future.

Adviser to Prime Minister Mohammad Shehzad Arbab said that the government had achieved 18 out of 34 targets in its first 100 days, and that work on the other 16 was “in progress”.

All in all, it seems that the PTI govt has managed to stabilize its governance and overall performance in the crucial first 100 days despite the fact that they faced several crises that many governments do not face in their entire tenure.

How fluctuation in virus-hit Asian markets is keeping traders on edge?