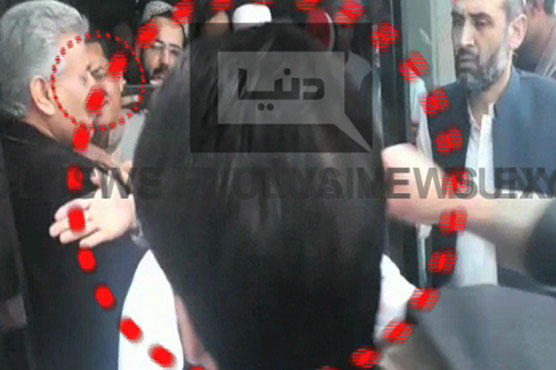 PMLN’s MNA, Javed Latif, with his nicely combed hair always conveys the impression of being a sensible wise person. But by Thursday evening his “decent guy” impression was shattered when a video went viral in which he – moments before the scuffle broke out – was found disparaging PTI’s MNA Murad Saeed’s female relatives in the most obscene language.

PMLN’s MNA, Javed Latif, with his nicely combed hair always conveys the impression of being a sensible wise person. But by Thursday evening his “decent guy” impression was shattered when a video went viral in which he – moments before the scuffle broke out – was found disparaging PTI’s MNA Murad Saeed’s female relatives in the most obscene language.

Before the video clips emerged, Javed Latif was the ‘celebrated victim” of a young firebrand, out of control Murad Saeed. PMLN media team, politicians and supportive tv channels spent the better part of the day condemning and blasting Murad Saeed and forcing him to apologize to Javed Latif. But by early evening, most media pundits went on to defensive. Mood had changed. This once again underscores the importance of “video clips” in a social and political order where spoken words, of even the most important people have lost all credibility. Imran Khan, Chairman PTI, who was briefed earlier on what happened, thus shocked the public when in a tv discussion with Anchor Nadeem Malik, he said that he would planted two more slaps on Javed Latif, had he been in Murad Saeed’s place.

In the old fashioned “honor based societies” like India and Pakistan, the kind of language which Javed Latif used for Murad’s female members of the family is almost always bound to lead to violence.

But on another level, never a dull moment in the Pakistan National Assembly. Theatrics abound to keep people entertained, instead of dealing with the country’s bread and butter issues.

The latest was yesterday’s heated dialogues that broke out, between PTIs Murad Saeed and PML-N’s Javed Latif. After Javed Latif used totally inappropriate comments – both culturally inappropriate and etiquette-wise unacceptable in most countries, but, even more so in Pakistan.

No PTI rep will go on any TV chat show where Jawed Latif is invited. In any civilised country he would be banned from all public forums

Nor will our party members & leaders attend any public forum event where Jawed Latif is invited.

What happened in the National Assembly

During the National Assembly session on Thursday, members of PML-N and PTI set aside all ethical responsibilities that are endowed upon them as party and people’s representatives and started a brawl.

Reportedly, PML-N’s Javed Latif slapped PTI’s Murad Saeed outside the NA floors. Saeed as a response punched the PML-N representative in his face. Murad Saeed, did this, as is now ascertained thanks to the video on the event that is viral on social media, because of vulgar comments made by Javed Latif about his female relatives.

Mariam Safdar Nawaz herself needs to takes note of this. Both Asifa and Bakhtawar have shown commendable leadership in recent months on such matters.

Javed Latif stated that Imran Khan motivates people for civil disobedience and contrary to Pakhtuns hospitality, Khan had called the foreign players who were willing to participate in Pakistan Super League (PSL) as “Phateechar.”

Latif further commented, “When Shaikh Mujeeb or MQM conveyed the same then they were labelled as traitors. If they are traitors then he (Imran) is also a traitor”.

The fight broke out later that day when the two representatives crossed paths at the NA corridors.

Later after the incident, Imran Khan posted several tweets highlighting the fact that Saeed’s family members were also disrespected by Latif during the conversation.

Political Parties reaction to the fight

Read more: Imran Khan – KPK & Sindh to get a “surprise”

Read more: Imran Khan’s PTI ends its boycott of Parliament, but why?

PML-N’s Talal Chaudhary stated in a TV conference that PTI was not conducting politics in a “respectable” manner. He said that the members of PTI not only attack the assembly on the floor but are also in a habit of doing the same “outside”.

This is the second time that a fight has been witnessed between the two parties, the first brawl taking place on January 26 on the floor of the NA.

After this event, the speaker Ayaz Sadiq has set up a six member Parliamentary Committee which is being chaired by the MNA, Ghous Bux Mehar. The aim of this committee is to look into the details of the scuffle. The committee is expected to submit its report by March 16, 2016.

However, the top leadership of PML-N should not be waiting for the committee to come to some resolution on the unacceptability of these comments. Thanks to the video, which shows exactly what happened, the PML-N needs to condemn the comments made by Javed Latif.

Mariam Safdar Nawaz herself needs to takes note of this. Both Asifa and Bakhtawar have shown commendable leadership in recent months on such matters.

Abbasi’s production order petition disposed of for being purposeless

Crackdown on social media draws ire from all quarters