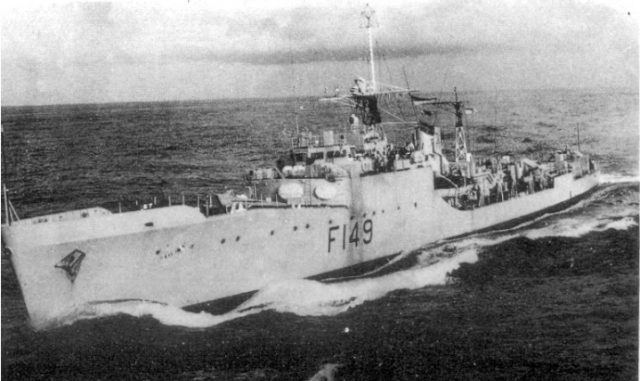 Pakistan Navy celebrated 47th HANGOR Day on Sunday to commemorate the courage and valour of the force that sank Indian Navy Ship KHUKRI in 1971 war. A simple yet elegant ceremony was held by 5th Submarine Squadron at Maritime Museum in Karachi where ex-PNS/M HANGOR is displayed in this connection.

According to PN spokesperson, Vice Admiral (R) Abaid Ullah Khan was the chief guest on the occasion. Addressing the ceremony, he said that Submarine HANGOR remained a pride for Pakistan Navy in 1971 war and its gallant action was a spectacular tactical battle resulting in the sinking of Indian Navy’s frigate. He said that the sinking of KHUKRI crippled Indian Navy’s morale and its nefarious designs of subsequent attacks on Karachi.

Kirpan was not sunk but there was a substantial amount of physical damage that led Kirpan to flee the battle scene by turning west towards deep waters.

PNS/M HANGOR Pakistan Navy Submarine was the first of the Daphne type submarines acquired by Pakistan Navy from France. It was commissioned on 1st December 1969 and arrived in Pakistan on 20th December 1970. Since its induction in the Pakistan Navy, PNS/M HANGOR had always been an efficient unit of the squadron and the Navy. She actively participated in all the major exercises at home and abroad. The submarine has shown the Pakistan Flag at various foreign ports which includes Toulon, Puero de Laluz, Las Palmas, Dakar, Launda, Lounanco Marques, Diego Suarez, Bandar Abbas (Iran), Dubai, Abu Dahbi and Muscat (1993).

On 9/10 December 1971, at 19:00, Hangor detected the possible signature of the two Indian frigates dispatched in response to its intercepted communications. Later, around midnight, Cdr. Tasnim ordered Hangor to dive deep to carry out a blind (sonar only) approach as the torpedo team concentrated on tracking the two targets as they gradually came within firing range. At 19:57, the submarine fired a down-the-throat shot with a homing torpedo at Kirpan from a depth of 40 meters (131 ft).

The torpedo was tracked, but no explosion was heard. It was then speculated that the torpedo had missed its target, and the moment Kirpan sensed the torpedo, the captain of Kirpan realized that the ship was under attack turned away at maximum speed from the scene. Hangor had struck first, but had failed to hit hard.

Read more: Pakistan vs India: Whose navy is better?

As Kirpan fled the battle, Khukri, to its south, knowing the direction from which the torpedo had come, increased speed and came straight for an attack on Hangor. As Khukri came in for an attack, Hangor’s attack team shifted targeting to Khukri, quickly firing a second torpedo. The second torpedo was fired at the approaching Khukri and was followed by a heavy and loud explosion as the torpedo struck the magazine of Khukri. Shortly before the impact, Hangor detected the direct orders of Captain M. N. Mulla ordering evasive manoeuvres.

INS Kirpan moved into the scene, hoping to engage Hangor with a hasty dropping of the depth charge, but a third torpedo locked onto Kirpan’s tail, followed by a loud explosion. Kirpan was not sunk but there was a substantial amount of physical damage that led Kirpan to flee the battle scene by turning west towards deep waters.

The PNS Hangor is nicknamed the Shark both as a tribute to the Alpha hunter of the oceans as well as its name (Hangor is Mekrani dialect for the Shark).

Hangor moved into searching for survivors in a hope to rescue but Khukri sank in a matter of two minutes before Hangor could reach it. The casualty roster listed 18 officers and 176 sailors aboard Khukri and it remains as the Indian Navy’s most costly wartime casualty in terms of lives lost. Kirpan returned to the scene the next day to execute the rescue operation along with INS Katchal but left without success. In later days, former members of the INS Kirpan would call for investigations into cowardice on behalf of the Kirpan captain.

After this incident, there was a massive search and destroy mission led by the Western Fleet, indiscriminately dropping depth charges hoping to sink Hangor. Cdr. Tasnim had Hangor submerged for almost a week, returning to its base with depleted lead batteries during the night of 13 December 1971.

Vice Admiral (R) Abaid Ullah also paid rich tribute to heroic action of PNS/M GHAZI which was deployed off Vishakhapatnam due to which Indian Navy moved its navy ship VIKRANT further eastward to the Andaman Island which made the ship ineffective throughout the war.

In recognition of their courage, the valiant crew of HANGOR was decorated with 4 Sitara-e-Jurrats, 6 Tamgha-e-Jurrats, and 14 lmtiazi Asnaad. This is the highest number of operational gallantry awards given to a single unit of Pakistan Navy. The ceremony was attended by Submarine HANGOR’s veterans and a large number of senior serving and retired naval officers.

Read more: Pakistan Navy Shows off state of the art naval vessels in…

The PNS Hangor is nicknamed the Shark both as a tribute to the Alpha hunter of the oceans as well as its name (Hangor is Mekrani dialect for the Shark).