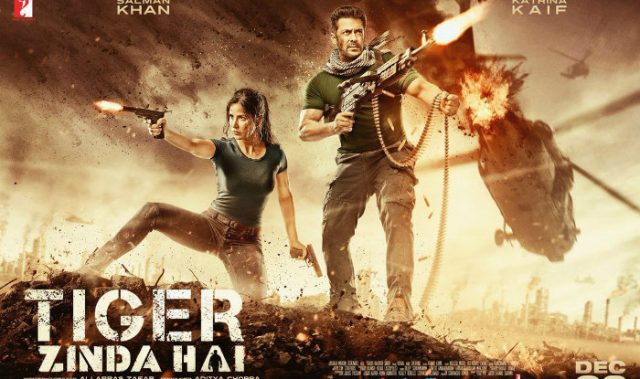 The posters of Salman Khan’s and Kaif’s upcoming film ‘Tiger Zinda Hai” are out. The intense gaze of Salman Khan with the dark red scar on his forehead is a delight for his followers since the hero is back in his action-thriller avatar.

The poster also indicates that the movie will be a good package for all the action-thriller movie lovers. Featuring alongside Katrina Kaif, Salman Khan is expected to end this year with a hit film.

The shooting of the movie is expected to culminate next week. Both Katrina Kaif and Salman Khan were in Abu Dhabi for the shooting and will be heading to Greece to shoot the last parts of the film.

“Tiger Zinda Hai” is a sequel to “EK Tha Tiger” that was released in 2012. Kabir Khan directed “Ek Tha Tiger”. To sustain the originality of the movie, director Ali Abbas Zafar has kept the main leads of the movie same.

Read more: Will Mawra’s “Angan” be the same hit serial like “Sammi”?

Ali Abbas Zafar also directed Salman Khan’s “Sultan”. Zafar and Khan are having high hopes with the movie and expect it to be a hit venture under Yash Raj Productions.

Zafar commented that “Shooting for Tiger Zinda Hai was grueling, challenging and a whole lot of fun. We’ve shot across pristine, relatively unseen locations in Austria, Morocco and shot on a huge lot in Abu Dhabi along with other spots. Right from the infrastructure, to the support that the local military has given us, shooting here was smooth and a great collaborative experience. Tiger and Zoya’s second outing is going to be larger than life, and the shoot lives up to that”.

The basic plot of the movie involves the story of two spies from India and Pakistan followed with some action and thriller.

While Khan also has promised that his movie would be an extraordinary experience for his fans and follower. Pinning high hopes on the success of the movie, Khan further commented that nothing like this has ever been offered in the Bollywood before what “Tiger Zinda Hai” will offer to viewers.

“Tiger Zinda Hai is going to be bigger than Ek Tha Tiger for sure. It begins from where we left off in part one. Tiger Zinda Hai has things that you have never seen before in Indian cinema. We are making this film on a huge scale, especially the action. The action scenes that I have shot with the team in Austria and Abu Dhabi are on another level. There are horses, tanks, big weapons and there’s this whole army, military backdrop. It’s like something you see in Hollywood films.”

Fans and followers are upset with Khan after he failed to impress the audience in “Tubelight”. The aggressive publicity of “Tiger Zinda Hai” has pulled up the expectations of viewers. Most awaited is now the trailer and the songs of the movie.

Previous articleWhy is Shahid Kapoor dissatisfied with “Padmavati trailer”?
Next articleDoes the growth in FDI depict the true picture of Pakistan’s economy?

18 September 2021
Previous articleWhy is Shahid Kapoor dissatisfied with “Padmavati trailer”?
Next articleDoes the growth in FDI depict the true picture of Pakistan’s economy?