PPP and PMLN alignment is a ’marriage of convenience’: Ali Muhammad Khan 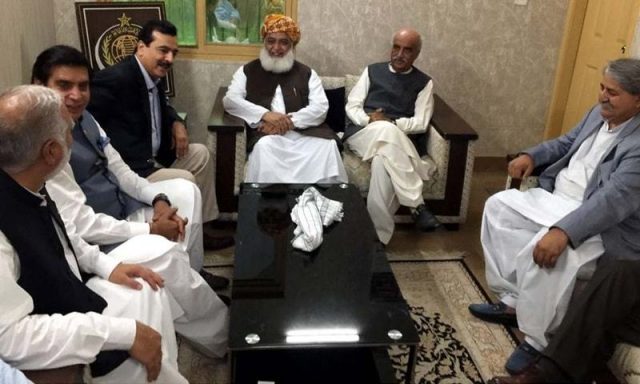 “PTI’s allies standing with and supporting the opposition’s walk out on Saad Rafiq’s production order is nothing to worry about”, commented the minister for parliamentary affairs Ali Muhammad Khan, “It is not as if they’ve joined the opposition; they can have disagreements with us”. He also said that there is no deadlock on the issue of Saad Rafiq’s production order “The appointment of chairman Public Accounts Committee was a deadlock too. This is no issue; walkouts happen all the time. This is what oppositions do”, Khan said.

He made these comments while speaking to Dr. Moeed Pirzada on his prime-time show “Live with Moeed Pirzada” at GNN TV. Countering the argument, about the importance of the production order of Saad Rafiq, Rana Afzal, leader of PMLN said that he ‘is fully convinced that the way things are going, it will come to a charter of democracy because production order is the right of a politician in a democratic set up”.

Rana Afzal countered Ali Muhammad khan by saying that Khyber Pakhtunkhwa’s PAC Chairman is PTI member, PTI has to prove its girth in the province as well.

On Friday, the 14th of December, the opposition had walked out of the National Assembly session in protest over non-issuance of production orders for Pakistan Muslim League-Nawaz (PMLM) leader Khawaja Saad Rafique. On the other hand, Pakistan Peoples’ Party (PPP) had also supported the protest of the PMLN against non-issuance of production orders of Saad Rafique.

It is pertinent here to mention that on Wednesday, the 12th of December, the Accountability Court had handed over Pakistan Muslim League-Nawaz (PML-N) leader Khawaja Saad Rafique and his brother Salman Rafique to the National Accountability Bureau (NAB) on 10-day physical remand.

While answering a question regarding PAC chairmanship, Ali Muhammad Khan told that the government showed great political spirit, by making Shahbaz Sharif the chairman of Public Accounts committee while Rana Afzal called it a democratic right. Rana Afzal countered Ali Muhammad khan by saying that Khyber Pakhtunkhwa’s PAC Chairman is PTI member, PTI has to prove its girth in the province as well.

Ali Muhammad Khan further said that the PAC chairman would not audit the projects of PMLN’s government. He added further that the PMLN government never offered any committee to PTI when they were in the government. Dr. Pirzada asked about the alignment of PPP and PMLN, which Rana Afzal called ‘an effort to review the charter of democracy’ as he maintained there were some shortcomings in the charter.

The informal meeting was held in the lobby of the Parliament House. The meeting also had former premiers Shahid Khaqan Abbasi and Raja Pervaiz Ashraf, Naveed Qamar and others in attendance.

Ali Muhammad Khan added an axiom to elaborate the alignment of PPP and PMLN by saying “You scratch my back, I will scratch yours.” He called it a “marriage of convenience”. He further added that ‘this time the charter of democracy is different from the previous one, “The next charter will be an open charter that will be no-NRO”.

On Monday, former president Asif Ali Zardari and the Pakistan People’s Party (PPP) Chairman Bilawal Bhutto Zardari called on the Opposition Leader in the National Assembly Shahbaz Sharif, where the two sides exchanged views on the political situation of the country.

Read more: PTI rules out alliance with PML-N and PPP

The informal meeting was held in the lobby of the Parliament House. The meeting also had former premiers Shahid Khaqan Abbasi and Raja Pervaiz Ashraf, Naveed Qamar and others in attendance. Meanwhile, PPP lawmaker Khursheed Shah also held a meeting with the opposition leader in his chamber. The former president, Asif Ali Zardari, has also expressed willingness to meet Nawaz Sharif again.

Eight ways to use coffee to rejuvenate your skin!