Protests against government: Will joint opposition achieve its objectives?

Rival political parties have decided to hold protests all across Pakistan against the incumbent government. The decision to hold these anti-government rallies was made at an Iftar dinner hosted by PPP Chairman Bilawal Bhutto Zardari, inviting PML-N leader Maryam Nawaz as a guest to discuss matters regarding the government’s misuse of authority. 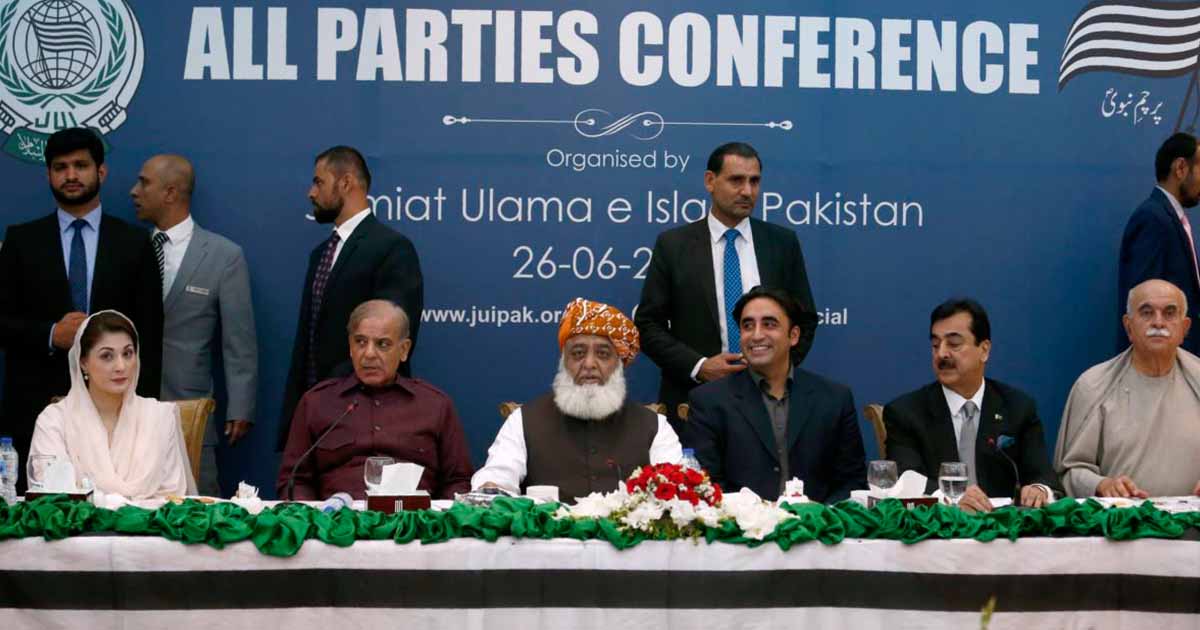 The opposition political parties have now decided to give a tough time to the incumbent government for its alleged uncompromising stance over the matters of misuse of authority and corruption. According to local media reports, the opposition parties’ ‘Rehbar Committee’ on Monday decided to hold public gatherings in all four provincial capitals of the country on July 25.

The underlying objective is to pressurize the Prime Minister and his cabinet to release Nawaz Sharif, former PM, convicted by an accountability court over corruption charges, and Asif Ali Zardari, former President who is currently in the custody of the National Accountability Bureau (NAB) over the allegations of money laundering and fake bank accounts.

According to details, the decision to give tough time to the PTI’s government was made in a meeting of the Opposition’s Rehbar Committee presided over by Akram Durrani of the Jamiat Ulema-e-Islam-Fazl (JUI-F). The meeting reportedly decided to hold public gatherings in all four provincial capitals of the country.

The PM has made it clear that there is only one way to avoid prison and that is to return the money the former rulers have looted from Pakistan.

Hasil Bizenjo and Mahmood Khan Achakzai will supervise the rally in Quetta, sources say, which Maryam Nawaz will also be a part of.

A Campaign Against the Government

The decision to hold protests against the government was taken during an Iftar dinner in Islamabad when PPP Chairman Bilawal Bhutto Zardari invited Maryam Nawaz. Both leaders decided to launch an anti-government campaign after Eid. During a press conference, Bilawal maintained that the opposition has jointly decided to come up against the government for its anti-masses economic policies.

Read more: Opposition will be united in Jail: Imran Khan in Washington

PPP chairman also hinted at reviving the Charter of Democracy (CoD), a document signed by Nawaz Sharif and Benazir Bhutto to bring democracy back to Pakistan during the last days of Musharraf’s era. The said document is also criticized for being a contract signed between the parties of status quo to maintain their political control over the country to prolong their rule.

Former premier Shahid Khaqan Abbasi also said that all parties have agreed that the government has failed in running the affairs of the country. He added that after Eid, an All Parties Conference (APC) would be held where a joint strategy would be formulated.

This is not for the first time that the government is going to face threats of being toppled. Maulana Fazlur Rehman, President of Muttahida Majlis-i-Amal (MMA), categorically threatened to disrupt the political process in the country if the results of General Elections 2018 are not declared “null and void”. The MMA president chaired an All-parties conference (MPC) in August 2018 along with the president of Pakistan Muslim League-Nawaz (PML-N) Shehbaz Sharif in Islamabad.

The conference rejected the General Election 2018 and demanded ‘free and fair’ re-elections across the country. “The All Parties Conference has completely rejected the July 25, 2018 elections with consensus,” announced Rehman while addressing the media. “We do not consider this election to be the mandate of the public,” said defeated MMA president.

Will Opposition be Able to Achieve its Objectives?

Considering the stance of the prime minister over the matters of corruption, it is evident that the opposition is not going to achieve what it wants to. The PM has made it clear that there is only one way to avoid prison and that is to return the money the former rulers have looted from Pakistan. He reiterated the same when he was addressed over 30, 000 Pakistani-Americans in Washington DC.

Previous articlePakistan will give up Nuclear weapons if India does: PM Khan
Next articleUS could kill 10 million, win Afghanistan war in 10 days: Trump

18 September 2021
Previous articlePakistan will give up Nuclear weapons if India does: PM Khan
Next articleUS could kill 10 million, win Afghanistan war in 10 days: Trump

Democracy is a beauty; Accountability is a necessity