PSL 4–Trophy unveiled: Which team are you rooting for? 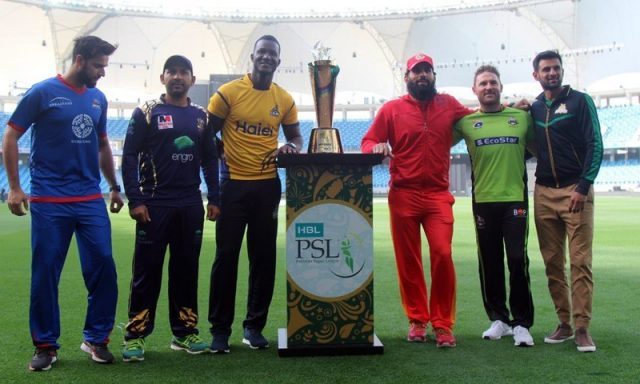 The Pakistan Super League (PSL) 2019 trophy was unveiled during a grand ceremony here at the Dubai International Stadium on Tuesday.

“The HBL PSL 2019 is set to provide incredible excitement to cricket fans all over the world,” Pakistan Cricket Board (PCB) chairman Ehsan Mani said during the ceremony.

“We thank our sponsors, partners, the six franchises and all stakeholders who have contributed in putting together this cricket extravaganza. We look forward to seeing a competitive tournament with a galaxy of Pakistani and international stars showcasing their talent,” he added.

Islamabad United captain Mohammad Sami said he was excited to lead a young side. “We have a young side full of talent. The guys have impressed everyone in the training sessions and we are carrying on with our tradition of promoting the emerging talent of Pakistan. I hope I can lead this group to another HBL PSL trophy,” he said.

“We are all working very hard. We will try to keep things simple, play good cricket and hopefully the results will come on their own,” the pacer added. Peshawar Zalmi skipper Daren Sammy was of the view that all six teams were very balanced. “All the teams have incredible talent and we will get to see quality cricket once again,” he said.

“I have had the great honor of leading a very talented Peshawar Zalmi side for two years and, this time we have even greater depth in our squad. The experience that guys like Misbah and Pollard bring to our squad is invaluable. We always get great support from our Zalmi fans in the UAE but we are all very excited to experience the love and warmth of the crowds in Karachi once again,” the West Indian all-rounder added.

Speaking on the occasion, Karachi Kings captain Imad Wasim said his team was brimming with extraordinary talent. “The Karachi Kings squad has a balanced core of local and foreign players. We are keen to do well this year and get our hands on the magnificent HBL PSL trophy.”

The HBL PSL 2019 will kick off with the opening match between defending champions Islamabad United and Lahore Qalandars on Thursday (tomorrow) in Dubai.

“It will be a dream come true for all of us to lift the trophy in front of our home crowd on March 17 and we will do our best to win it,” said Imad, who is fourth in the T20 International rankings for bowlers.

The current captain of the team is the All Rounder Imad Wasim whereas; Colin Ingram, South African Batsman will be Vice Captain. Rashid Latif is its Director of Cricket Operations while the cricket star Shahid Afridi is the president of the KK.

Read more: Rooh Afza and Karachi Kings: A step towards the youth

Karachi Kings has managed to entice famous beverage brand Rooh Afza to be its gold sponsor for PSL4. In addition to being a sponsor, Rooh Afza will be featured heavily in the official Karachi Kings song. It will also be present in the dugouts during matches. The step of Rooh Afza to sponsor the Karachi Kings indicates its willingness to reach out to the Youth Bulge of Pakistan.

The HBL PSL 2019 will kick off with the opening match between defending champions Islamabad United and Lahore Qalandars on Thursday (tomorrow) in Dubai.