PTI: A party of thugs? 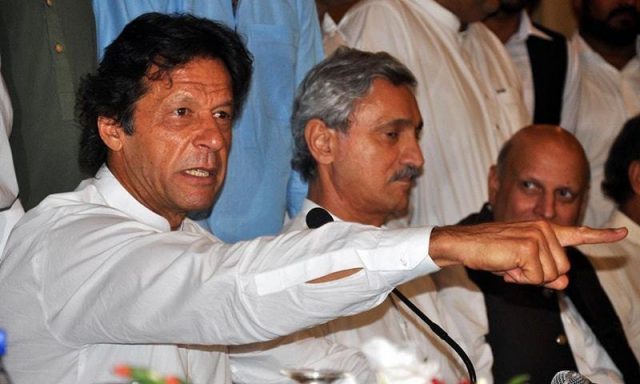 The Chief Justice of Pakistan (CJP) displayed his utmost displeasure over the alleged involvement of Pakistan Tehreek-i-Insaf’s (PTI) MNA Malik Karamat Khokhar and MPA Nadeem Abbas in police matters. The CJP Mian Saqib Nisar was hearing a case at the Lahore registry pertaining to the illegal occupation of nine plots in Johar Town area of Lahore.

According to the overseas petitioner, Mahmood Ashraf, a land grabber Mansha Bam had allegedly grabbed his property while police were reluctant to take action against the grabbers. While hearing the case the top judge was surprised to learn about the activities of two lawmakers from the ruling party.

The involvement of political figure into the matters of police became even clearer in the recent case of a DPO.

“Since when has the PTI started behaving like thugs?” the CJP inquired. He added, “Did people vote for you for this? Are you going to make a Naya Pakistan while helping thugs?” Superintendent Police (SP) Muhammad Maaz told the CJP that whenever the police tried to take action against Bam, they received calls to stop the operation.

“Mansha bam is a part of a big land grabbing group and is accused of illegally occupying land in seventy registered cases,” the police officer informed the court. After learning from the police officers that Mr. Karmat influenced official matter, the CJP said he won’t be allowed to go back as MNA if proved guilty.

Read more: “I have no political agenda,” says CJP Nisar

“Karamat Khokhar, you will not go back as an MNA if found guilty in today’s inquiry,” the CJP said. “I will not let any thug live in the country.” The top judge has ordered both lawmakers to appear before the SC on Monday (today) where the court will decide about their fate.

Since the lawmakers did lie before the court, the CJP was irked to observe glaring contradictions in the statements of both lawmakers. “Why don’t we initiate contempt proceedings against you for your wrong testimony?” the CJP asked Khokhar. “You said in court you don’t know who Mansha Bam is.

PM Khan has promised to introduce the same system of merit and rule of law in Punjab to make his Naya Pakistan.

Then why did you phone the DIG for the release of Bam’s son?” the CJP inquired the PTI leader. “I beg the court’s pardon,” Khokhar said sheepishly, to which the CJP responded: “Someone who lies cannot be Sadiq and Ameen. Your character is on display. If you lie to the people, how will you answer to them?” Justice Nisar asked.

Bring your resignation letter with you, or I will write it for you,” the CJP told Mr. Abbas who was asking for forgiveness. The involvement of political figure into the matters of police became even clearer in the recent case of a DPO. The DPO of Pakpattan Mr.Rizwan Gondal was immediately transferred and made Officer on Special Duty (OSD) for allegedly stopping Khawar Maneka, ex-husband of Bushra Maneka.

On August 23, it was reported that a police team led by DPO Rizwan Omar Gondal briefly intercepted Khawar’s car after he didn’t stop when signaled by the police to do so. Khawar was also believed to have misbehaved with the officials. The officer was later directed to visit Maneka Dera, Khawar’s residence, and tender an apology to him for intercepting the vehicle.

According to media reports, the DPO told a meeting called by Chief Minister Usman Buzdar that the police department had only fulfilled its duties and that he won’t apologize to Khawar. Shortly after, the officer was transferred and asked to report to Central Police Office (CPO) in Lahore.

The CJP had taken the notice of the incident and demanded a report by the chairman of NACTA to ensure that nobody influences the transfers of police officers. The CJP has also said that the SC wants to see the police completely independent and free from any political pressures. Interestingly, the KPK PTI-led government was able to free police from the shackles of the political elite in that province.

The KP police have many times been quoted as model police by the judges of the apex court. PM Khan has promised to introduce the same system of merit and rule of law in Punjab to make his Naya Pakistan. It is, however, yet to be seen that how does PM Khan deal with Punjab where electables often desire complete control over the police and local governance.

Why you must read Henry Kissinger’s “World Order”?